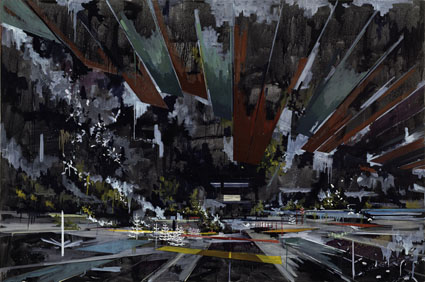 The landscape painting of David Schnell reflects the manifestations of a nature, which is getting undercut by our direct, urban surrounding. Thereby architectural pieces capture more or less dominantly the image area of the landscapes. David Schnell uses places such as the cultivated landscape around Leipzig, his domicile and place of study as master student of Prof. Arno Rink, as sources of motive for his pictures.

Within his contemplations of landscape the artist does not evoke real moments of memory. He rather shows an abstract nature which lies beyond any recognizable or concrete experiences. This abstraction manifests itself in the pictorial dissolving of architectural structures and wavering, partly competing vanishing points. Alienating, dissolving, decomposing and subsequent connecting are signs of the artists processual way of working. There are also visual contents which are formed just out of pixels and barcodes. The fluttery status is additionally pointed out by the colouring of the pictures, which ranges from monochrome displays up to prism like light refractions.
The pictures by David Schnell awake the impression of constant speed and destabilisation, which finally also questions the own sense of time.