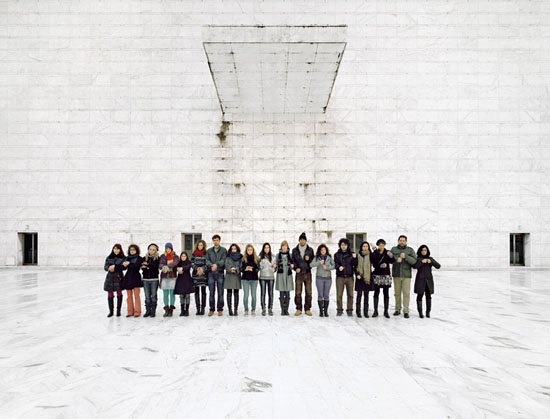 Nina Fischer's and Maroan el Sani's work, IMPERO DEI SEGNI, created in 2011, records the performance of a temporary intervention with activists in the empty Palazzo dei Congressi in Rome as captured in a series of photographs. The work presents the ‘demonstrative' appropriation of a site where power is demonstrated. The intervention by the artists borrows from various forms of non-verbal communication (such as gestures, body language and sign language) that draws from the repertory of communicative devises and actions used by activists to re-appropriate the site through this communicative action and to make new demands on the identity of the city in which they live.

The work IMPERO DEI SEGNI thus unites two sets of themes in contemporary art: on the one hand, the discourse surrounding ‘appropriation and art in public spaces', and on the other, ‘artistic intervention in the political'. The work thus seizes on essential questions in intervention art, such as those already posed by the Situationists and other ephemeral, situation-specific performance artists, in short: how can artistic criticism have an effect in the political sphere? The project does not dwell on the aesthetic argument of these objects, but offers a concrete set of instructions for action through the work. The work can be seen as a piece of fine art-fine in the sense that it possesses edifying qualities for the viewer and prompts, quite literally, action, the art of action.

The work makes reference to the Palazzo dei Congressi, the congress building built in the 1930s as part of Mussolini's monumental and imperial vision of a ‘Third Rome', a site for the ‘art of power', the stylized enactment of the regime in art. ‘The standard by which things were set here was no longer the individual, but historical reference.' The act staged here of the human articulation of our own free will jars with the overriding order of the glorious display of power, chiselled in gleaming stone, and thus posits the ‘power of art' as a counterpoint to the vision of a ‘Third Rome'. The artistic intervention amounts to an intensely radical contradiction of the symbolic sphere of value of an excessive, authoritarian brand of architecture and symbol of state power, and breaks it with the demonstration, presented as the revelation of the individual's will. At the same time, the site, although historically charged, is an anonymous non-place for the viewer. The architectural aesthetic recedes into the background before the unfolding action of Fischer and el Sani's intervention, so that the performed protest is also able to find a stage for itself here. The exact site of the insurrection remains abstract and is not subject to geographical constraints. On the contrary, protest is a potentially ubiquitous phenomenon. Insurrection, protest, dissent and demonstration are everywhere.

Nothing is more transient than political content in visual form, while on the other hand, nothing is as powerful in its historical impact as dissent. With the iconographic universalism of the political act of ‘protest', political art manages to pull off its precarious balancing act between finding socio-political contextual validity on the one hand and achieving timelessness on the other. The danger of flirting with political doctrines, of allowing functionalization in the relationship between art and authoritarianism, is avoided by the artists' refusal to convey concrete political statements in an aesthetic fashion, in short, by placing the emphasis squarely on the act of protest itself. The photographs of Fischer and el Sani therefore purposefully eschew serving revolutionary agitation. All that is presented is the empty process of the evoked conflict, thus leaving all debate for or against the hidden cause completely open. The unstated here opens up the chance for the viewer to perceive political connotations of his or her own.
In its clear dramatic composition, the photographic series reads like a storyboard of protest, a script for insurrection. Irrespective of the occasion, the first step to making an open, political statement is always a private decision made alone. It is only afterwards that the collective makes itself felt as a closed entity. However different the various demands in rebellions, protests and demonstrations may appear, the non-verbal signs of unity and the firm belief of representing the ‘right' thing, as demonstrated here, show their universal symbolism, particularly in the last major protests. Fischer's and el Sani's dramaturgical depiction of rebellion ends with the word ‘manifesto', conveyed in sign language. The exact manifesto, the idea, conviction, the thing fought for, the thing fought against, all remain open.
The will to take action is their priority, and the knowledge of action itself!
(Text: Chris Piallat)