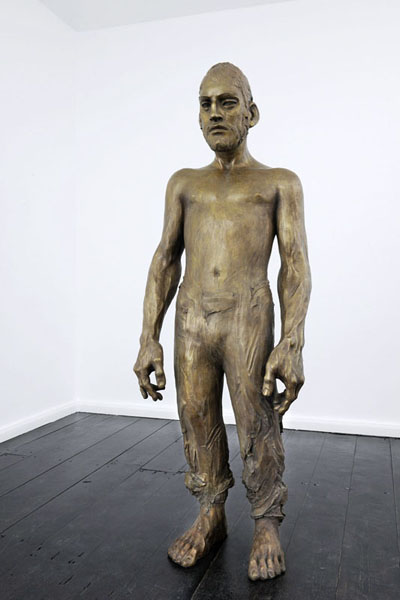 GHOST LIGHT. The artist's visual world has gradually enriched since her solo exhibition ‚Reset' in 2009. The impulse of Stella Hamberg's new start disembogues in her three standing, crouching, leaning sculptures, which are titled ‚Ghost Light'. One would assume to meet these figures on a glade, a highway or in a forest. Ghost lights that are hard to follow due to their constant movement. Their postures show inwards, they convey neither silence nor action, neither concern nor a lack of interest. No symbols, no hints, only the remaining clothes, partly not even existent anymore, only half a leg, an ankle, the back of a hand or a stomach.

The figures without a pedestal are as tall as their viewers. Their over-dimensional hands and feet resemble those of Michelangelo's famous statue David at the Piazza della Signoria in Florence, which was actually created for the higher floors of the Santa Maria del Fiore cathedral. Hamberg's Ghost Lights point out anatomical displacements of their limbs without any distorting perspective of the view.
They indicate their inner situation in a silent but crude way. They do not try to be heroic or elegant. Yet their forceful appearance cannot be denied.

These ‚sneaky advisers' in the eighth pit of hell in Dantes ‚Divine Comedy', which seems like ghost lights wrapped in flames are condemned to vegetate in a turbulent manner. This stands in total contrast to Hamberg's figures. The mass of material of which the sculptress constructs her figures presents an unwavering grip. Their forceful presence stands in contradiction to stoic autism, which they are addicted to and will always be. The clothes define their bodies rather than protect them and though they are wearing trousers it seems as if they are sitting or standing statically naked. 'A picture is like a mountain and a mountain doesn't move', Stella Hamberg says. Yet they are still moving - at least in our heads, flickering around like ghost lights.

Stella Hamberg, born 1975, was a sculpture student in the classes of professor Martin Honert in Dresden. Since her master's degree in 2005 the artist has been living and working in Berlin. She obtained a Karl-Schmidt-Rottluff-scholarship in 2006. Stella Hamberg's works are shown at the Albertinum in Dresden and in the sculpture garden of Villa Schöningen in Potsdam this year. Her first institutional solo exhibition will be inscribed by and at the Mönchehaus Museum Goslar.

Hamberg's plastic work focuses on man as such, which has always been popular in the history of sculpture. Hamberg sees her work on plastic figures as a dialogue and in each of her imageries a different language is spoken - the Berserker, the Companion and now the Ghost Lights.

On Saturday, August 20, 2022, the galleries in Leipzig and Berlin as well as the EIGEN + ART Lab will be closed for operational reasons.