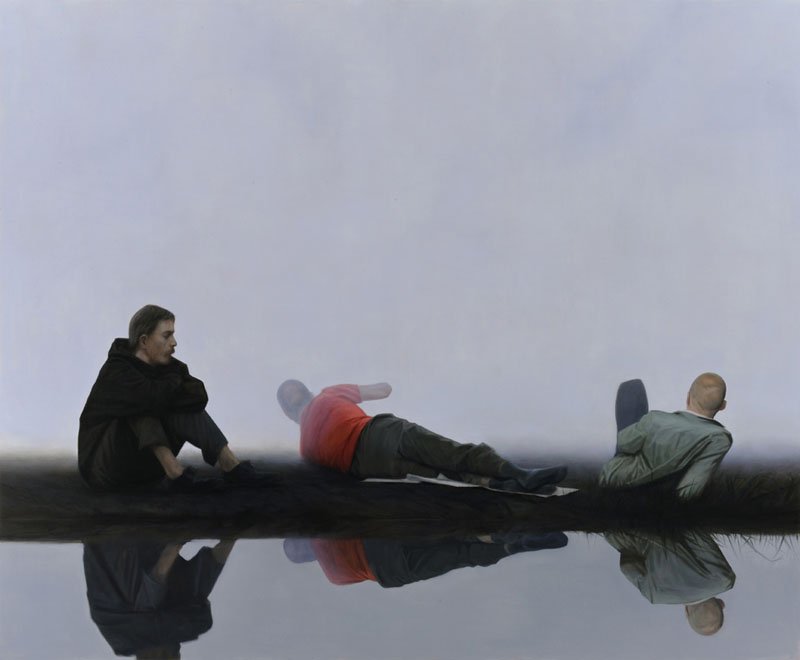 Tim Eitel, born 1971 in Leonberg near Stuttgart, is internationally known as one of the most prominent German painters of his generation. Because of his coloured-bright paintings of landscapes and museum rooms, populated with people, who are mostly completely concentrating on themselves, he became famous. Current scenarios of a lack of true relationships. Already in this "bright period" Tim Eitel stands in the tradition of a modern era with the topic of the grown lonely, disoriented human.

This pessimistic prevailing mood, which was not always recognized in his former works, intensifies Eitel since 2008. The issues of this new paintings are proverbial "lying on the streets": derelicts, the rubbish, people with cardboard boxes as their homes - for the first time exhibited in march 2008 at the renowned Kunsthalle Tübingen.

The artist, who moved recently to Paris, has remained to this subject area. Paintings of a fascinating darkness occurred, with whom the persons conflate, in a way that the figuration of Eitel becomes almost an abstract colour field painting. He found a lot of themes in Paris - and in the near St. Denis, where he has his studio. St. Denis, where the French royal families are buried, is a central site of black African inhabitants and other immigrants. There is a girl who he often comes across on his way to the studio. Eitel portrayed the girl with her brother, shield by an umbrella. Certainly, one might forebode a misery, but Eitel is not a plaintiff of social situations. He reflects his world of experience.

A central work of the exhibition at the Gallery EIGEN + ART is a grey-black painting full of mysteries, where five persons are ascending across stairs out of an indefinable depth on an also indefinable plateau. It's a bizarre scenery, which the playing child at the image border hardly seems to notice.

The painting by Tim Eitel is impeccable. It is completely characterized by the artistic tradition of a modernity that wanted to be objective and reserved, to capture the reality more precisely artistic.