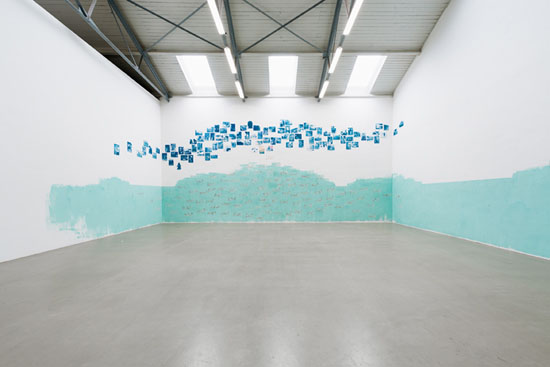 The showroom appears in a simultaneously intense yet soft green – a 'prophetic' green. Green is the colour of paradise, the favorite colour of prophet Mohammed and therefore ubiquitous at sacred places in Islam. In the colourfully painted surfaces of the walls Jörg Herold has carved the 99 names of Allah with hammer and chisel. 100 works made out of paper, cyanotypes, that seize different ideas and representations of paradise are hanging above those writings. They expand and replenish the mural work, and possibly comment on it. 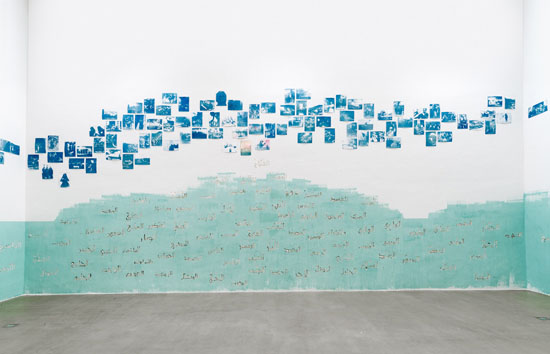 In his work Dschanna. Prophetisch Grün – Leipziger Tor zum Paradies the artist Jörg Herold takes a close look to paradise and as a consequence to belief and religion – a topic which unites people, but which has the potential to drive people apart from each other and which can lead to war. “Herold's intention is to overcome conflicts. As a necessary precondition you have to unterstand each other. To achieve that, you have to take new views and to change your perspective constantly – regardless of whether you share the opinion or not.“* In Dschanna Jörg Herold faces something which is new to him by turning to Islam, more specifically: to the 99 most beautiful Names of God. The Generous, the Illustrious, the Exceedingly Merciful, the Knowing, the Just, the All-Powerful, the Indulgent, the First, the Last… to know all the names of Allah and above all, to internalize them, is a prerequisite for reaching paradise in Islam; thus prophesising a Hadith – a tradition of the sayings of prophet Mohammed. The title „The 99 Names of God“ is symbolical, because the Koran and the Hadiths in fact contain more than 100 names for Allah. The symbolic title of the doctrine is based on the fact that, according to Islamic faith, the hundredth name of Allah is ineffable and not known. 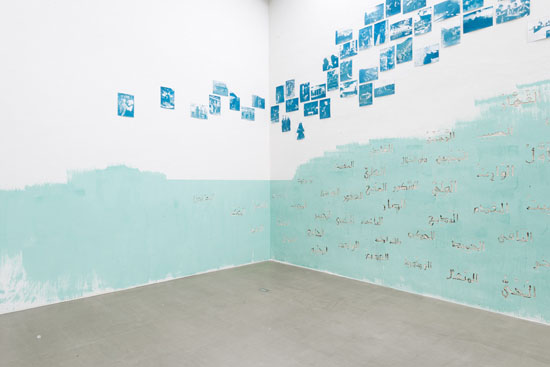 For serveral days Jörg Herold carved the 99 names of Allah meticulously, concentratedly and accurately into the walls of the gallery. In the act of writing he searches for access to the incomprehensible. This practical and sensitive process he has carried out is based on further steps. Jörg Herold who describes himself as a documentary archeologist has researched, documented, arranged and selected material for the exhibition. Out of this selected material he has developed cyanotypes, which are produced in a photographic process by means of chemical reaction. The cyanotypes demonstrate ideals, different visions of paradise on earth – scenes that show private visions of home, but also public, societal ideologies are here identifiable. The imagery that is created by the chosen motives and production processes allows Jörg Herold to blur the boundaries between dream and reality, analogous to pre-existing notions of paradise. There are 100 works made out of paper because paradise is contrary to the hundredth name of God imaginable. Jörg Herold has found his main sources for Dschanna in the debate between Germany and the Arabic world as well as in his own experiences and the material he has collected during his journey to Jordan. Dschanna represents Herold's attempt to comprehend, “because for him it is about overcoming religious conflicts and about the cultural memory of human beings.“* 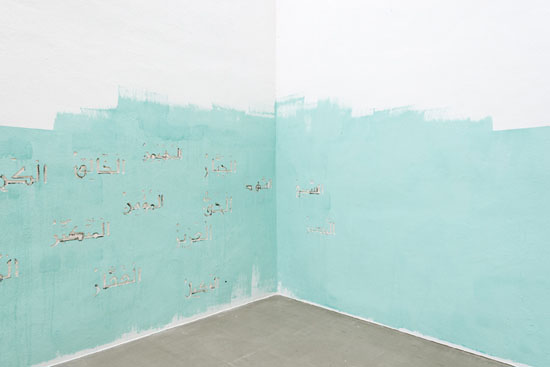 * The quotations from above are taken from a text by Walter Smerling, published in the catalogue connected to the exhibition Luther and the avant-garde. Contemporary Art in Wittenberg, Berlin und Kassel, May 19 until September 17, 2017 (Wienand Verlag, Cologne, 2017).