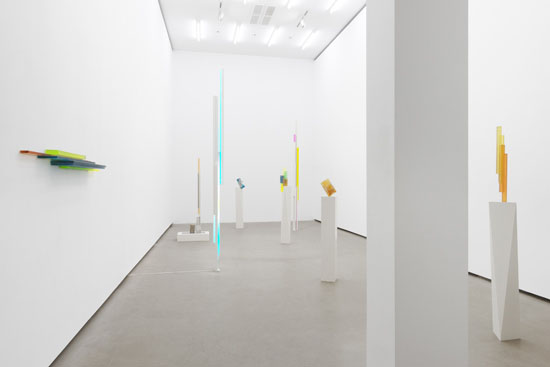 Kai Schiemenz's works are concerned with the city, space, architecture, and the regulating effect these constructs gave on people. His small-format sculptures are structures, complete in themselves, in which he combines digital technologies with natural materials like wood or paper. At the same time, they function as models for expansive installations and architectures for exterior and interior spaces, in which Schiemenz uses lines of sight to construct spaces that involve the viewer directly by means of their permeability.

He often works with social sculpture or active architecture that asks about the connection between built spaces and community. This means that architectures are not mere containers for human needs and desires, but themselves generate human qualities and needs, just as experiences and observations construct and influence every image we make of things. At the center of his work are not naturally grown landscapes, but urban ones, i.e., what man makes out of nature. A particular eye is thereby cast on the regularities, geometries, and orders of nature that human beings appropriate and use.

In his solo exhibition, Schiemenz shows two new groups of works in which the concept of architecture increasingly dissolves and the artificial materiality of the surfaces moves to the foreground. Built, architectonic, constructed space is juxtaposed with a group of geometrical, glass objects whose forms recall ores or grown crystals, but which display a purely artificial and made materiality. Substantively and practically, however, the point is not to oppose digital, artificial materials to natural or manual processes, but for the two sides' intermeshing to see and be seen.

Kai Schiemenz constructs a space from totally artificial materials – the reflecting surfaces of mirroring pillars, PVC sheets, lights, trashy plastics, and colorful or reflecting Plexiglas dissolve the built architecture and create a new space – a façade that each visitor perceives individually via lines of sight.

This glitteringly pleasant eye-catching optical effect confronts a group of glass objects that function as a visualization of avant-garde architectonic ideas and utopias. Colored, opaque, intricate glass crystal forms stand on sculptural columns in the room like objects perfect in themselves. Their closed density takes up the futuristic forms and visions of Bruno Tautscher's architecture of the 1920s, when he and other proponents of the Neues Bauen (New Objectivity or New Building) were gripped by a driving socio-economic idea that generated huge forces in architectonic imaginings and projects.

Kai Schiemenz (*1966 in Erfurt) studied at the Kunsthochschule (College of Arts) Berlin-Weißensee and the Universität der Künste (University of Arts) Berlin. He has shown his work in numerous group and solo exhibitions, including at the Kunstverein Wuppertal, griffelkunst Hamburg, the Kunstverein Harbuger Bahnhof, MARTHa Herford, and the Zeppelin Museum Friedrichshafen. He lives and works in Berlin.