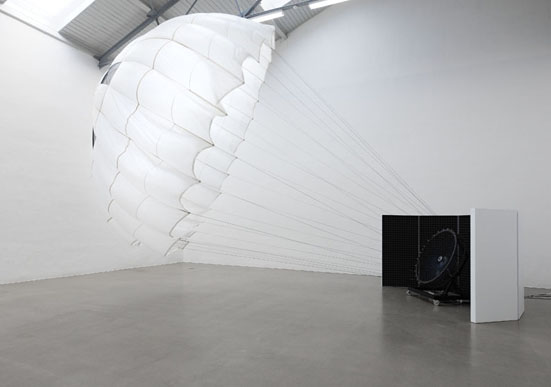 In the exhibition pionier at Galerie EIGEN + ART Leipzig Carsten Nicolai realizes his work pionier I, a space installation that varies between the states of stability and instability: A white parachute is expanded by the air flow of a windmachine and flaps in line with the installation continuously and formally controlled, but still comparatively unstable and unpredictable inside the showroom. The parachute is arranged in a deficient balance; it gets into a reeling of the interplay between gravity and wind energy and therefore figuratively provides as a metaphor of the invisible balance between order and entropy.

In the middle of the 1990s Carsten Nicolai started working in a sphere of the crossing between nature and art in which explicit borders often seem to disappear. Since then his fascination for natural phenomena, mathematics and physics developed into an integral part of his artistic production. "I‘m trying to assign part of my creative decision back to natural processes. Nature is the most important factor of inspiration for me; it is a creative medium. Nature is a huge creative mystery that we still don‘t understand completely." Nicolai transfers natural phenomena in an artistic language or uses mistakes as creative material and thereby sensibilizes the perception and the understanding of our environment.

In experiments on the speed of sound (334 m/s, 2007), on the display of acoustic noise (milch, 2000 / wellenwanne, 2001), on visual perception (moiré, 2010 / tired light, 2007) or on self- organizing systems or samples (cluster, 2008 / autoR, 2010): Nicolai is most interested in the sensitization of the viewer for the underlying mechanisms of nature to expose their operating mode and to relativize people‘s placement in their environment permanently.

His attention centers especially on the intricacies of human perception, because the key to the understanding of the world is placed inside them. In refering to this, Nicolai is trying to question the concept of creativity itself. This approach is leading to results that seem to get along without the will of creating and produce esthetic forms. Like inside a laboratory the artist acts as a catalyst to force reactions and provoke new constellations of meaning.

In the exhibition besides pionier I (2011) he also shows different pictures of a magnetic tape loop (tape loops, 1998), that constantly generates itself into a casual sculptural form and in doing so constitutes the changing potential of self-organizing structures.