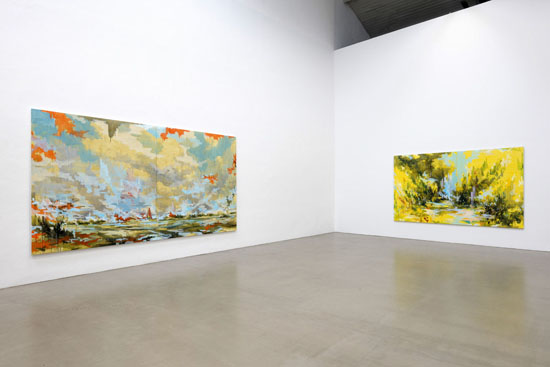 For the exhibition „morgen“ David Schnell created eleven new paintings on canvas. The works are from 2012 and are now presented in public for the first time. Recurring elements like horizontal stroke structures and scattered perspectives are common from David Schnell’s older works, as well as the monochromatic colourness of the individual paintings. The term of the landcape landscape painting, that appears often, in spite of the abstraction of Schnell’s paintings, is even more justifiable now in his current works. With their horizontal breaks, their fine colour gradation and dynamic forms, some of his new paintings even resemble the dutch landscape painting of the 17th century

„David Schnell has been focusing primarily on landscape painting since 2000. It is in the landscape that nature and culture dovetail: it is the connection between nature, human action, and an idea. (...) The striking change or development in Schnell’s painting shifts the focus to the moment in which the world and its dissolution become one. The precise painterly formulation of the object gives way to a free, gestural brushstroke and a chromacity that radically liberates itself from the object. The strict system of the picture’s composition is forced open. Despite the fact that the central perspective continues to dominate, the planes of the pictures expand in every direction, dispensing with any sort of hierarchy. The line vanishing into the depths of the painting is supplemented by other, occasionally competing, vanishing points, which in turn create distorted perspectives and overlapping dimensions.(...)
It is impossible to comprehend the construction and deconstruction of the space, the individual and the whole, the detail and the totality all at once. Everything is immediately visible, seems equally important, and yet, in the next moment, eludes access. In the course of a specific visual and perceptive process, the viewer has to surrender to parallel changes in speed, level, and direction. Always in the midst of the picture, the viewer nevertheless remains outside of it, looking for an obvious, justifiable relationship between himself and the painting, which, however, can no longer be established. The more intensely one attempts to situate oneself inside the painting, the more one gets lost inside of it in the web of overlapping levels and staggered horizons.“