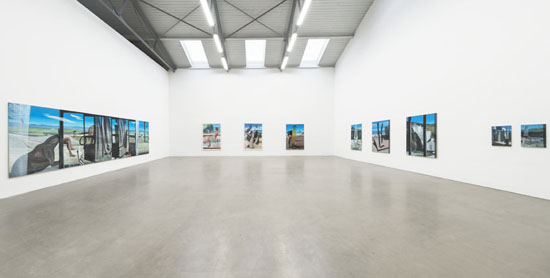 A hint of vacation wafts through the Marc Desgrandchamps exhibition. Clear blue skies, strewn with only a few white cloud veils, is a constant in all the pictures. They bathe the scenes – here on the beach, there in front of a hilly landscape or rugged cliffs – in an even light. Like photographs taken through a filter that promise the clear light of the South.

The figures – surfers, swimmers, or people strolling – are traces of moments, composed from snapshots the artist took on various trips to the coasts of the Mediterranean, found images, motifs from art history, and personal scraps of memory. Who they are and where they were plays no role. 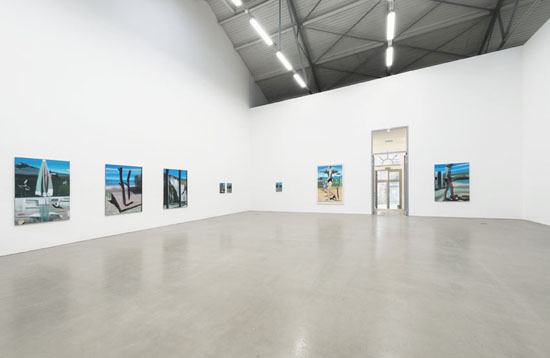 They are overlaid in thin, glazed layers of paint, as if on foils, sometimes in front of, sometimes behind the landscape that surrounds them, and it sometimes happens that a head is missing or a pair of legs strolls in the sand, isolated from the rest of the body. As if individual figures and forms had wandered through the pictures, leaving their traces behind in some meanwhile empty place, only to move to the next picture. The term "wandering forms" that the art historian Aby Warburg coined at the beginning of the 20th century to explain the reemergence of ancient figures and poses in the pictures of the Renaissance decidedly serves as a reference here.

Marc Desgrandchamps repeatedly places sources of disturbance in these so idyllic-seeming landscapes: amorphous shapes, black, shadowy stripes without any source of light, maimed growths reminiscent of the forms of tree trunks. The flowing mode of painting in thin washes intensifies the impression of disturbance; the calm is literally bleared. Sometimes they are consciously placed forms that serve to balance the composition of the picture as it builds up, sometimes they are mistakes, relics of first sketches and developments that Marc Desgrandchamps corrects and revises in the painting process, without overwriting the original painterly idea. 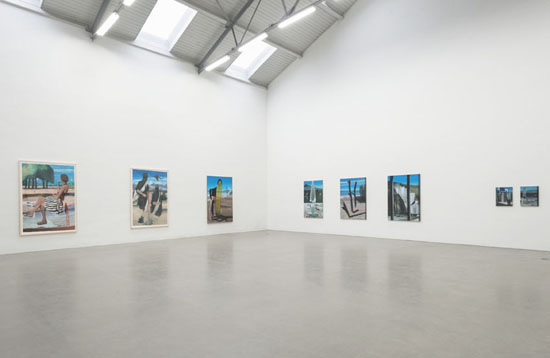 One picture in this series catches the eye immediately: in front of a range of mountains and against this blue sky in the background, two black-masked figures move toward the lower right corner – or rather, their upper bodies do so, because their legs are missing below the knee. In front of a white sash running diagonally across their bodies appear the black, stylized sticks that each holds in its bent right arm. The mind's eye immediately calls up those pictures from wars and crisis regions that confront us daily in all the media, strewn among the news from all over the world, placed in the newsfeed between bikini photos and landscape photos, impalpable but omnipresent. It's very possible that they also have to do with the recent events in France, says Marc Desgrandchamps, an indirect trace of the violence that constantly runs through the mood of our time, as background noise or right up front on the surface.

There is no unambiguous reality in these pictures; each describes for itself an autonomous reality in which moods, real or invented memory, and the traces of people, objects, or events slide over each other like backdrops. A double-exposed vacation movie in painting.