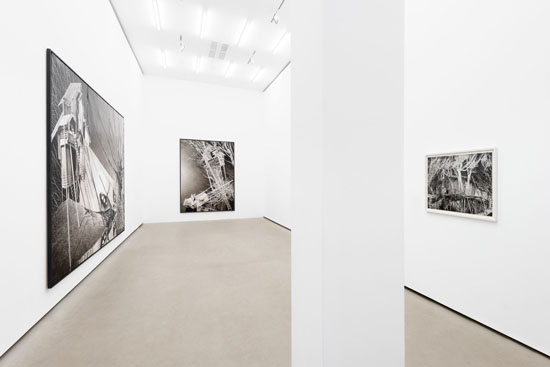 Mirjam Völker’s works show forms of dwelling – cottages, mobile homes, vehicle cabs, and tree houses. Dwellings can be refuges, havens, and retreat spaces. Optimally, they are sites of security and provide the defenseless with shelter from weather and external attacks. The meager, weathered, and deteriorating dwellings in Mirjam Völker’s works seem entirely inadequate to this purpose. They are placed like foreign objects in the middle of nature; empty and abandoned, they are overgrown by thickets. Destroyed and not at all homey, these shelters offer signs of discontent and fragility, rather than security and warmth.

In her works, built spatial constructions and untamed natural space stand in a relationship characterized by demarcation and interpenetration. The interventions are mutual: urbanity invades uncultivated terrain and burgeoning vegetation gradually reconquers space. 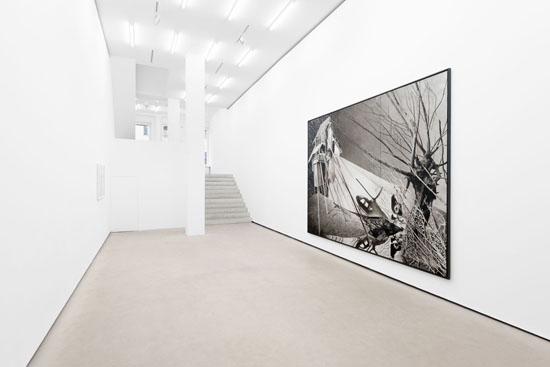 Though no person can be seen in Völker’s pictures, what were once refuges bear traces of former or current inhabitants, for example when a light shines through the drawn curtains of a mobile home. But what takes place behind them is withheld from the viewer’s gaze. The presence of something concealed is palpable, but remains a mere discomforting suspicion.

In her new, large-format works on paper, provisional wooden huts stand without solid ground on rickety stilts in a network of branches. Accessible only via long, narrow ladders, their great distance from the ground promises protection from natural threats and intruders, but at the same time the long stilts signal a dire fate. On the heaped ground or dry boughs that serve as their foundation, they cannot guarantee a stable stand; leaning only against desiccated trees, they end up in a hazardous tilt until they fall.

But whom do they bring to a fall, for whom were they built? Their mode of construction seems provisional: cobbled together from wood, corrugated metal, tarpaulins, and civilizational trash, they can hardly hold up to the vagaries of nature. Their raised position makes these huts observation posts. There are no doors, but behind slits, hatches, and barred windows one suspects eyes watching the surroundings. 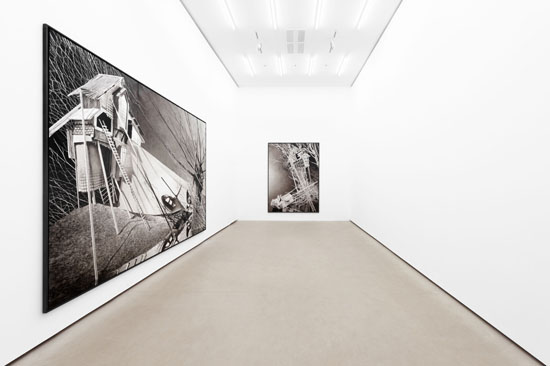 While the work “zu Fall” (bringing down) tips over backward into the emptiness of dark waters and becomes entangled in the slope of their banks; in “Bruchstelle” (breaking point), a helicopter has crashed. The glare of floodlights suggests the scene of a crime, a rescue attempt, or a surveillance measure. Without clearing up what is happening, the powerful sources of light expose the nocturnal scenery. The crash is additionally concealed by a stretched piece of cloth on which the drama is vaguely shown. The viewer is not among the well-informed, but only an indirect witness of the events; the secret remains.

Mirjam Völker (born in 1977 in Wiesbaden) studied at the Akademie für Bildende Künste (Academy for Visual Arts), Johannes-Gutenberg Universität Mainz and at the Hochschule für Grafik und Buchkunst (Academy of Visual Arts) in Leipzig. She was a master student of Neo Rauch’s from 2008 to 2010. She lives and works in Leipzig.