Thin ice
is paradise
if you can dance with expertise.
(F. Nietzsche, The Gay Science, Prelude 13) 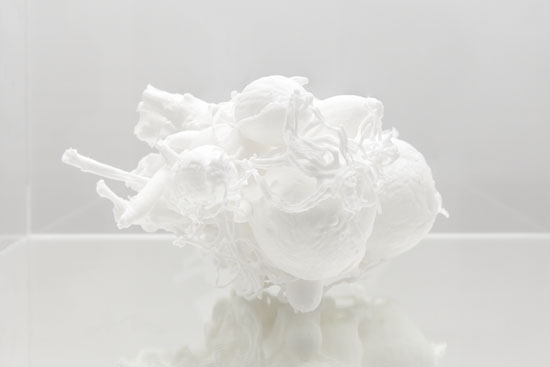 Maix Mayer's theme is ambivalence, the unrecognizability of recognizability in a time when certainties are increasingly going missing. His interest is in the conditions of people in the urban and suburban spaces of the late 20th and early 21st centuries. In the sense of Nietzsche's Gay Science, he has gone in search of visual and acoustic aphorisms that can be assembled in a story about the legacy of modernism. Film images, photographs, models of cities, his own texts, quotations from the great thinkers of late modernism like Hannah Ahrendt, Marc Augé, Adorno, Bloch and Benjamin, Roland Barthes, and Siegfried Kracauer, and borrowings from the cinematic strategies of Chris Marker and J.-L. Godard are montaged to installational media collages that must be as if bodily walked through in the exhibition room. The exhibition as a labyrinth of images, with no overview from any position. To move from projection to projection, receiving the recorded texts through wireless headphones, taking in images and texts synaesthetically, losing oneself in the streams of information and poetry, and thereby beginning to think for oneself: following the associations and placing one's own thoughts beside the meandering thought of the author Maix Mayer. Nothing less is expected from the viewer. But nothing more, either.

M. M. quotes Henri Michaux: One no longer dreams; one is dreamt; silence.

To this end, he invents extremely elaborated spatial compositions that, wherever possible, take their cue from the concrete site of events, what is called the genius loci. For example, barosphere_3 in the Rostock Kunsthalle, the sole new museum building in the former East Germany, designed by Peter Flierl. Opened in 1969, this art hall is an outstanding example of high-quality East German modernist construction culture and thus itself an actress in barosphere_3. For his intervention, M. M. chose the White Cube, nowadays roofed in glass, the sole relevant con- struction change from the original building – once an open, ground-level interior courtyard that put the construction volumes into balance. A at, raised surface built into the room like a theater stage was glued over with a polygonal camou age pattern or dazzle. M. M. designed this graphic, which looks like a kind of map, in a combination of mathematical and subjective, interpretational work steps based on his research on buildings of East German modernism in the state of Mecklenburg-Western Pomerania. Several scenic performances were carried out on this pattern and filmed with cameras in two different positions, so that they can be presented in the same place in a double projection. The Kunsthalle thereby became a multiple key actor in the production of real and medial space.

Basically, these elaborated visual-acoustic installations are something like an experimental setup for an evocative historical consciousness. The point is not static knowledge or artistic habitus, nor overall, internally consistent narratives, much less questions of style. The point is perception, beholding as the highest form of knowledge, and the metaphysics of the social in the image of the architectonic.

M. M.'s work emerges in collective interaction with the actors, who come from the locations of the shoots, with costume designers and film people. The female and male speakers of the author's texts are also chosen in relation to these sites. In barosphere_3, for example, Charly Hübner, as a phenotypic northeastern German, reads aloud M. M.'s re ections on the modernism in the north of East Germany. And Thomas Krüger recites once again his showpiece from East German days: Kurt Schwitters' Ursonate. Plus Walter Womacka's painting Junges Paar am Strand (young couple on the beach), the favorite picture of the original First Secretary of East Germany's communist Socialist Unity Party, Walter Ulbricht, and the icon of so-called East German art. M. M. stages it several times with friends at the seashore as tableaux vivantes and makes postage stamps out of it as ironic deep digging in the collective consciousness, pictorial politics of the brain.

In 2016, M. M. began his series barosphere_1–3, multi-channel video installations with texts. He created barosphere_1 while on a fellowship at the German Academy Villa Massimo in Rome. Everything exists in close proximity there: Baroque palaces, like that of the Barberini family with bees in its coat of arms; Bernini's stairwell; and the gigantic ceiling painting by Pietro da Cortona. Power, religion, along with the metaphysics of modernism, the legacy of the Futurists, Italianità, de Chirico's pictorial worlds, being lost, emptiness and simultaneously the assertion of the rational, Neoclassicism in the architecture of Italian fascism. All of this is present in Mussolini's city foundings and above all in Rome's EUR district. What does M. M. do? He films a woman with a dog on a long leash. They walk through EUR, measuring the architecture's gigantic presentation of power against the human format. No people, no cars, only stage set, dog, and the woman with the leash. This is a poetic image, tinged with melancholy humor. As Bertolt Brecht wrote: The great doesn't stay great, the small does not stay small, / The night has twelve hours, but then day comes.

Or the blue-tiled former post office in Sabaudia, one of Mussolini's test-tube cities, a work by Angiolo Mazzoni. Is this fascist architecture? Or a triumph of Rationalismo? M. M. leaves the question open. Le Corbusier, in contrast, found the whole city too romantic. And the speaker in the film announces: Perhaps rationality is only one system among many.

As if to prove it, a third level comes into play: the summer house that the actress Monica Vitti and the director Michelangelo Antonioni had built on the Costa Paradiso in Sardinia at the end of the 1960s. A kind of decadent love nest, a domed building with two upper storeys, cast in the architect Dante Bini's Binishell concrete shell technique. Illustrated-magazine romanticism in futuristic guise, today en route to a ruin. Self-supporting concrete shell works have long fascinated M. M. He devoted several works to the engineering architecture of Ulrich Müther (1934–2007) from Binz on the island of Rügen, most recently in 2017 with the film Schalenterritorien (shell territories), which also tells the story of the demolition and destruction of some of these unusual buildings after 1990 – like that of the famous Ahornblatt (maple leaf), one of the restaurants inaugurated in East Berlin in 1973 on the occasion of the World Festival Games and that was depicted on a stamp as a symbol of reconstruction. M. M. conducted research in Ulrich Müther's archive. Since then, we know what there was to eat and drink at its opening in Berlin (Deutsches Pilsner beer, Weinbrand normal brandy, and Deutscher Doppelkorn grain spirits).

The theories of the French anthropologist Marc Augé about places and non-places and his anthropology of solitude impressed Maix Mayer with the idea of the social (dys-)function of urban spaces. These non-places – airports, transit spaces, refugee camps, temples of consumerism, and hotel chains – are the places of those who have no places. Non-places have no individual identity and no common past, and they create no social relationships. They are signs of collective loss of identity. The non-place, writes Augé, is the opposite of utopia; it exists and it harbors no organic society. (Marc Augé, Non-lieux, introduction à une anthropologie de la surmodernité, La Librairie du XXe siècle, Seuil, 1992)

The three parts of the barosphere project contribute to making the utopias and dystopias more recognizable. Part 2 plays in the industrial belt of Ostrava in the Czech Republic. The various phases of industrialization and deindustrialization left clear traces in the architecture and art of the urban space here. The site of events in barosphere_2 is the decommissioned steel mill, which is recognized as a UNESCO World Heritage industrial monument and which hosts an art hall that stages pres- entations. M. M. enlarged the marbled papers from the steel mill's archive to wallpaper format and papered the walls of the exhibition foyer with them. Thereby, the small does not stay small here, either.

One can disentangle all these chains of associations and trace the motifs to their origins. But one need not. Nothing of this is self-important faux significance. Maix Mayer, educated both as an artist and as a scientist, achieves again and again the wonder of dissolving highly complex contexts into pure poetry like a dancer on thin ice. And so the boundaries vanish between art and document, fiction and reality, medial and real space. We may feel ourselves liberated for once: through art. 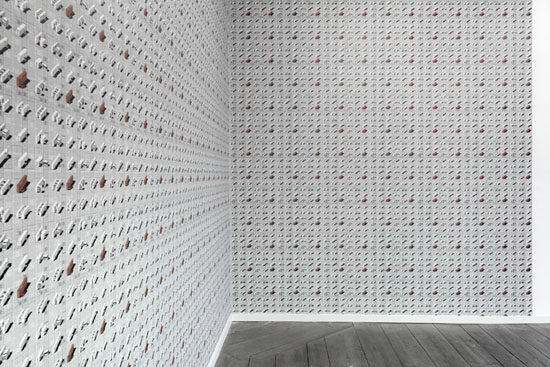