The new series of sculptures, Mono, uses a sphinx done in 13th century by Pasquale Romano as an antecedent. This medieval sphinx sparked the artist’s desire for a reinterpretation: from the absolute, hieratic frontality of Egyptian sphinxes to a decisive twist, representing the maximum possible twisting of a head turning back to narrow the field of view to its own body. 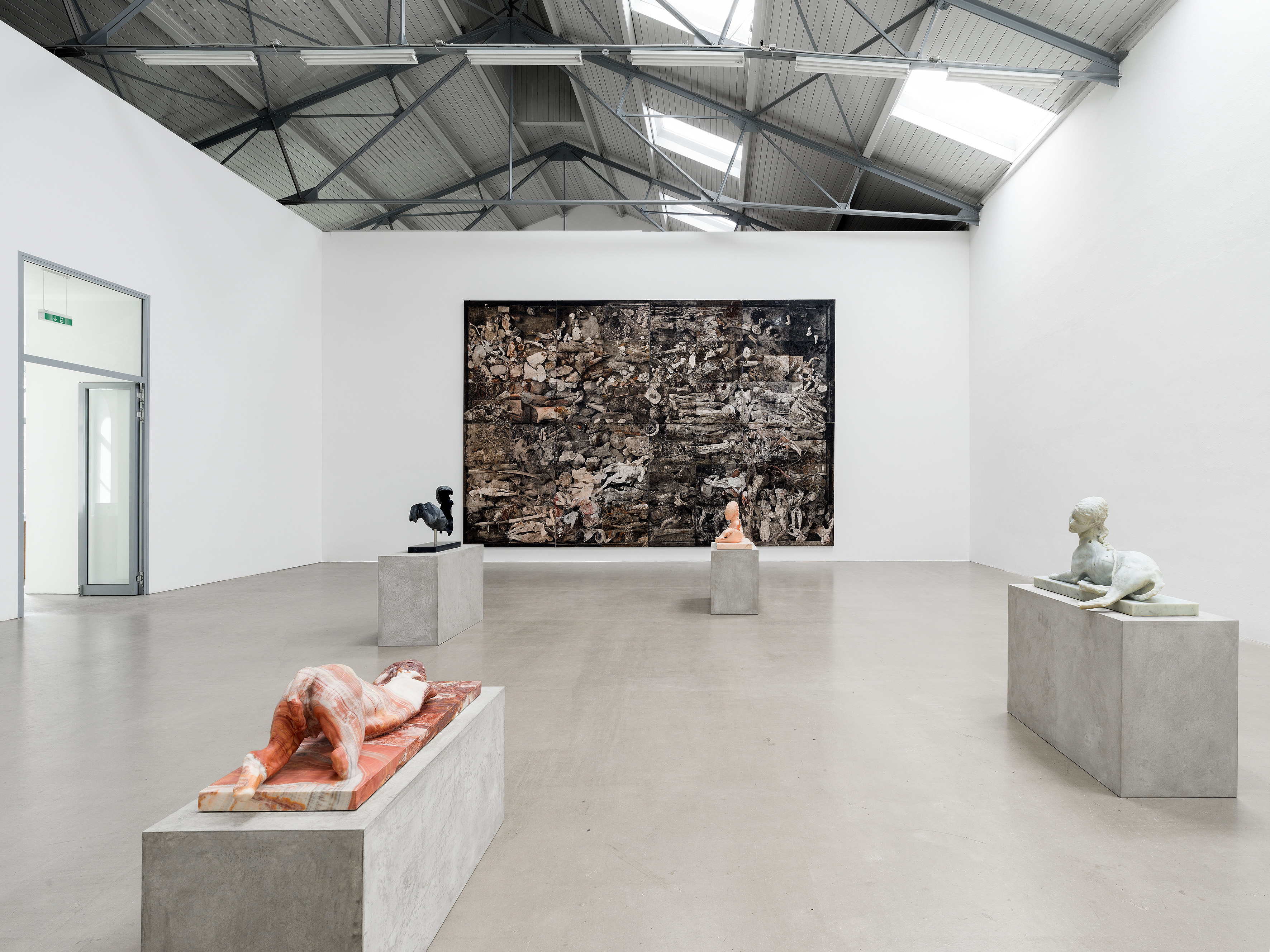 The four sculptures cannot be considered in a single pose, however, and each figure has its own range of movements and variations scored by the twisting of the head that gradually becomes a progressive fall under the weight of a force that dissipates and "melts" it into the pedestal’s marble. They transmit and receive various contrasting forces around them: one generates a sinuous upward movement toward the head, a head indifferent to the viewer's gaze and intent on beholding itself. Another force instead pushes the head to bend beyond the limit of possibility until the whole body becomes a soft element that folds and closes in on itself. The process of deformation and dissipation the other sculptures prefigure is blocked, as if the sphinx in its entirety were drawing an elliptical, closed, self-referential movement around itself - any attempt by the viewer to meet its gaze is nullified. 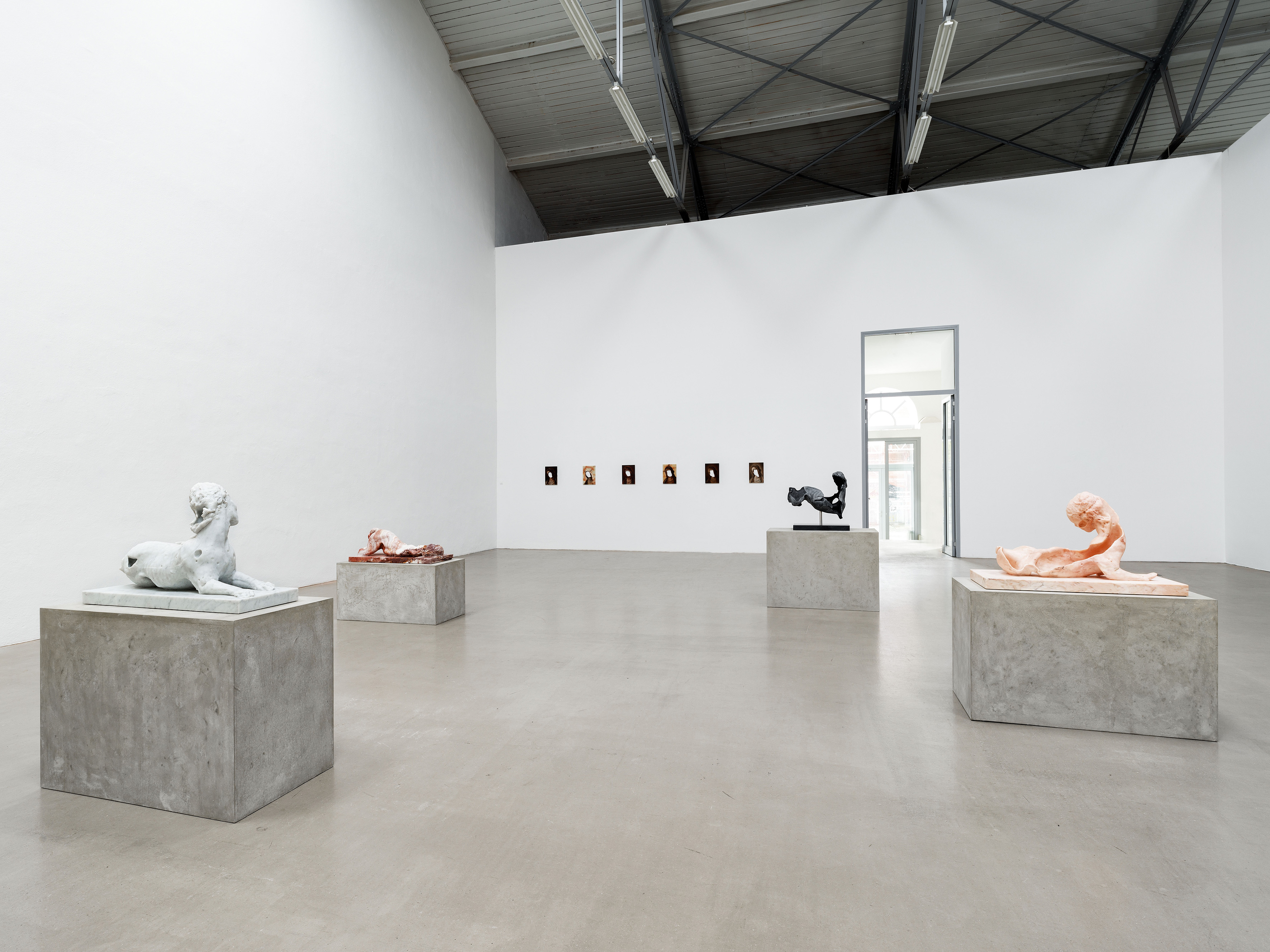 Placing his sphinxes in apparently classical sculpture configurations, Nicola Samorì has begun using his pedestals in a more articulate form: as vehicles of meaning, as elements suspended between their conventional nature and the sculpture resting on it, in which the figure is embedded, so to speak, as a resting surface, allowing the bodies to lengthen so far that they extend beyond the sculptural space the pedestal signals. Tubular element resemble the devices archaeological museums use to isolate fragments, thus letting the sculpture manifest its presence as a hypothetical find. Another pedestal provides the base into which the entire body sinks under the force of gravity: an ultimate space for the disappearance and removal of the figure. 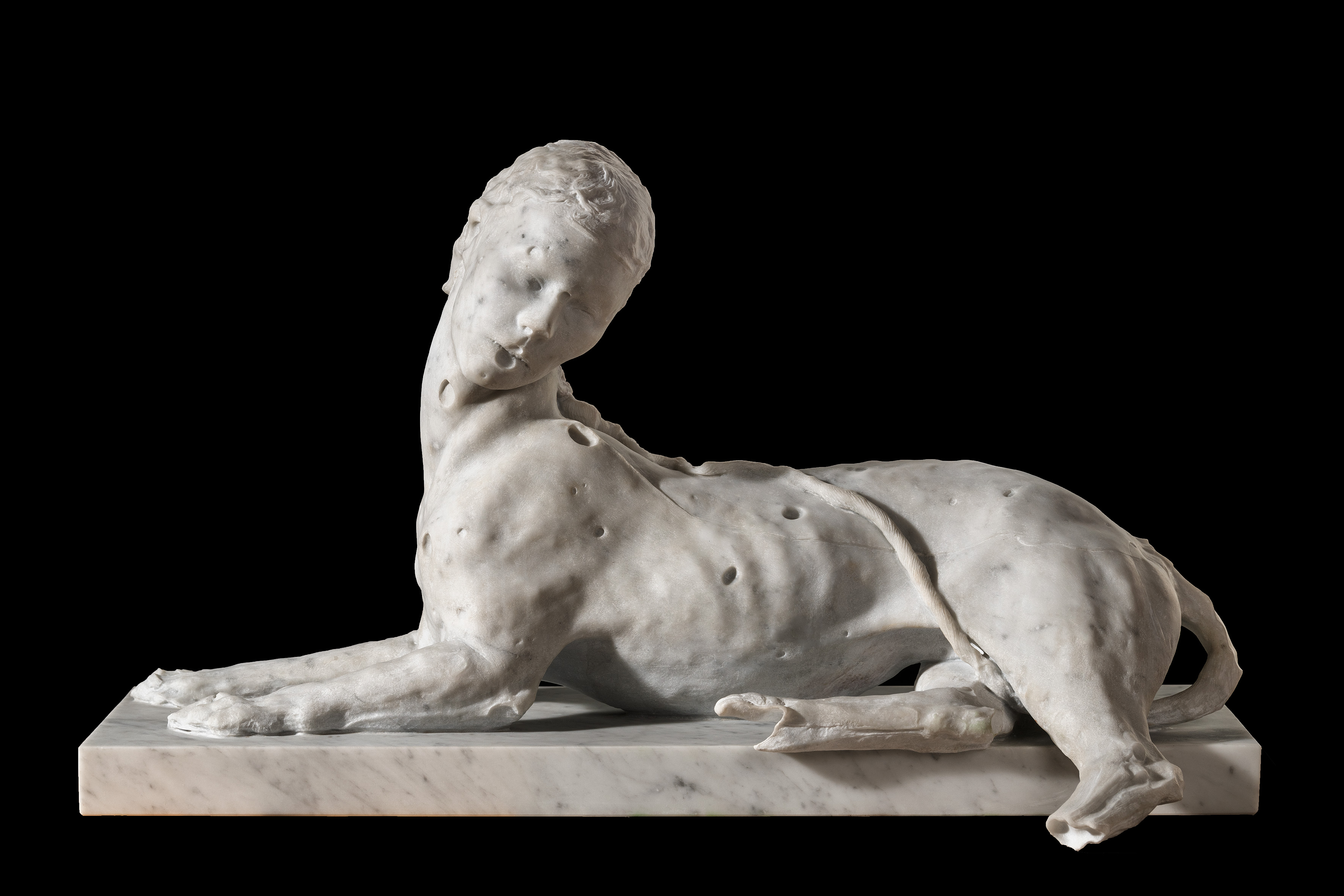 MONO uses the dialogue between two works as its point of leverage: the contrast between the series of sculptures and a large wall work from which the sphinxes retract their gaze. Campo dei miracoli results from combining a series of papers in the same format on canvas on which the artist has printed in oil the outlines and shapes of things that seem derived from shadowy, viscous depths and were then modified and completed. The surface never stops absorbing, reproducing, and multiplying elements that can only partially be named: bodies, fragments, stones, scraps, remains.

Thinking of others the painting might recall, The Triumph of Death (Palermo) and the fresco The Tournament-Battle of Louvezerp by Pisanello at the Ducal Palace in Mantova come to mind: works depicting masses of human bodies packed so closely they could be mistaken for objects in the surroundings. Then I looked at what surrounded the painting itself in Nicola Samorì’s atelier: facing the wall on which it hung, I saw the same piles of mixed painting and sculpture scrap and fragments casts for statues that Nicola meticulously allows to accumulate in the vicinity of a new work’s creation. Might this painting be also a portrait, a mirror-view of his studio?

Campo dei miracoli is a large painting awash in detail, particulars of things that appear to proliferate unchecked all over the place for which an assembly drawing is either absent or irrelevant. Everything is arranged for observation from up close or far off. The image is irresolvable, indeterminate, unstable, one in which countless details proliferate one next to another - ceaselessly, in perpetual unfinished state.

But I might be wrong. Can we really be sure that despite its lack of centers and apparent spatial organization, ringing with apocalyptical tone, Campo dei miracoli is a painting that has nothing whatsoever to do with history at all? Are we certain that it tells no tale, offers no image of our day? That it is not the image of our disaster, our own disastrous time, faced with which the sphinxes choose to look away?

Excerpt from the text by Davide Ferri
Translation by Frank Süßdorf