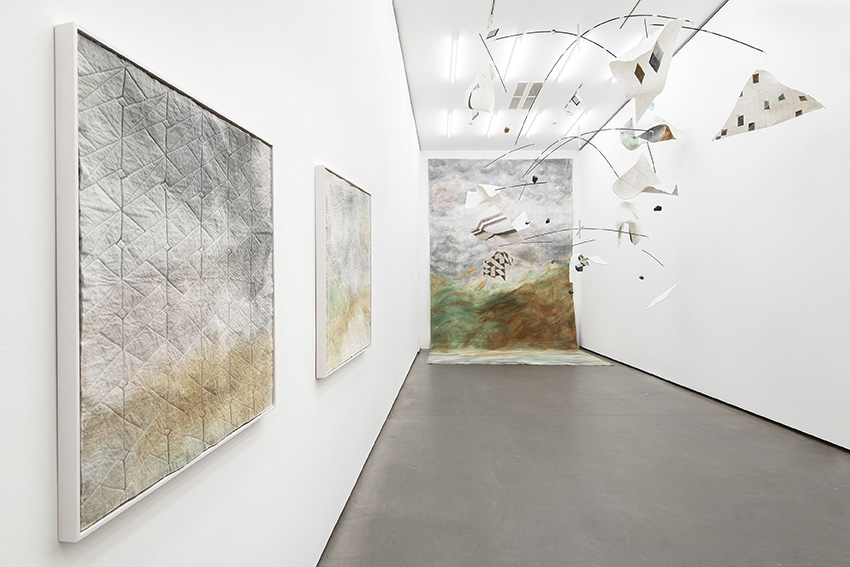 Raul Walch's banners cut a strange figure against the sky. What is the artist laying claim to when he waves his stateless flag against abandoned landscapes? The very question is besides the point. With no emblems or insignia, the artist subverts the power of messaging in the public sphere, be it by way of national flags or protest banners. Instead, he calls attention to the frame: the expanse beyond the rippling fabric. The punctum becomes the wide-angled world.
The artist and activist is known for a roving practice that frequently occurs as airborne, billowing geometric textile works. Around the world, Walch inserts these sublime abstractions into urban landscapes or sets them against natural phenomena. Sometimes, the work anchors itself in those places and other times it only breezes through them like a passerby. In either instance, when studying the pattern language of his fabric paintings, or when seeing the choreography of his towering mobiles, the very act of looking becomes a meditation or a decompression—because his works do not try to explain these vast and marginal spaces they inhabit—they poetically and simply ask the viewer to behold them.
For this recent body of work in the exhibition "Unfollow," Walch introduces elements from his recent travels in Europe into distinct works that hang together in what the artist has described as a multiverse. Like the show's title, the exhibition is punctuated throughout by what seems like imperatives, as language inserts itself with bright colors into what are otherwise abstract bodies of work. Screen-printed works on paper call out "steal this flag" or "leave it underground," but, in the end, they are purely poetic. There is no obvious reaction to be beckoned from the viewer beyond contemplative awareness. The utopian, post-nation-state, or climate-driven dreams are given a place of permanence in that thought-space as they are pressed down in ink.
Much of Walch's practice is set against nature or urbanity that finds itself in a critical stage of transition. Like most of the materials used by Walch in his practice, individual elements that make up the artworks are repurposed—every object has breathed in open air outside of the white cube in some way. As such, the show charts out a line between two environmental polarities—at sea level, a coal mining factory in Lausitz and, 3,800 meters above and farther south, the glaciers of South Tyrol. In a short looping film called No One to Follow, the artist plots his way across these two disparate places: one, a site of "excellent" nature and, at the other, a site of resource-extraction and overt destruction. While the glacier appears to exemplify natural beauty, the sun is beaming down; to protect it from melting, a thick wooly fleece is draped across kilometers of ice. This juxtaposition of, on the one hand, an unnatural state of preservation and, on the other, one of bustling destruction shows that any ideation about the natural and the unnatural is paradoxical. In all cases, nature finds itself in a state of human-induced entropy; Profitability connects them. 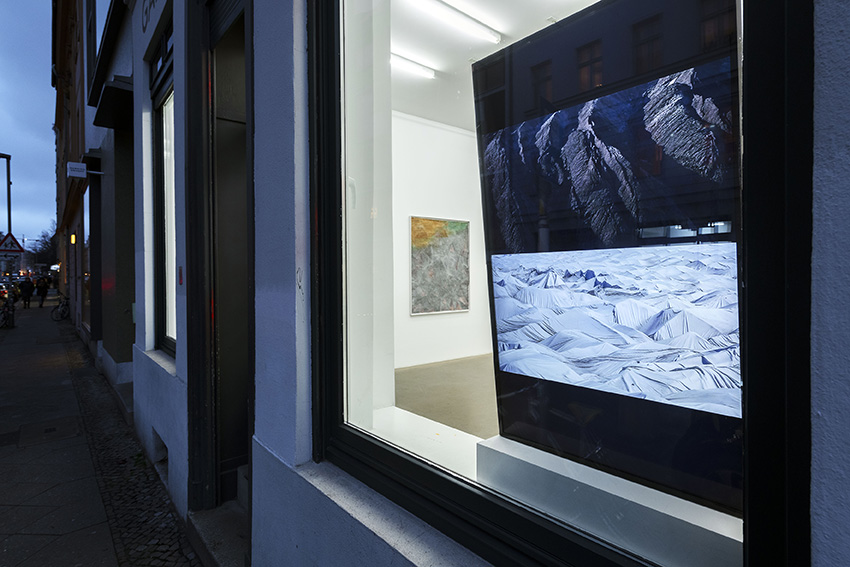 No One to Follow introduces textiles that recur physically in the gallery as NonWoven Semaphores, a series of fabric paintings that pad the walls. This industrial fabric, which is usually found wrapped across mounds of snow and sheets of ice, is draped in several iterations against perfectly unnatural white walls. Walch brings this unfamiliar fabric down and remaps its wispy fibres with colors, quilting and resurfacing it into an abstract cartography—the fabric becomes an aerial view of itself. Walch overworks each panel with earthly pigments from under the ground—like coal and mine-culled ochre from Brandenburg, or burnt tar.
Importantly, notions of "high art" are cast out of "Unfollow". The title of a towering and gently moving mobile, made again from this same alien glacier fabric and draping the viewer underneath it, is The High, Low And In Between. The words play with this idea of high and low in terms of geography and physical height and depth—but also, crucially, in terms of cultural idealism. Standing under the mobile's sway, questions circulate. What is high art, or conceptual, and, thus, luxurious—and where, if anywhere, does the political or grassroots seep through? What belongs in this white cube, what belongs on the street? Eventually, the viewer heads back outside.
Kate Brown