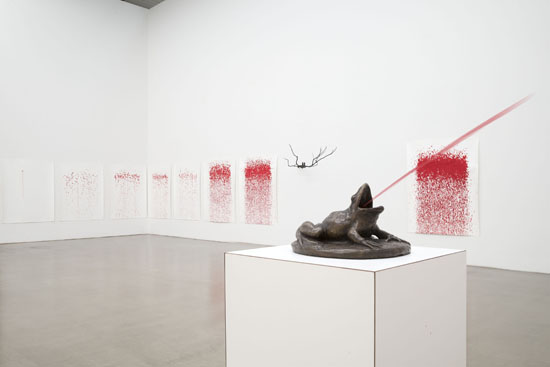 It's not only Rémy Markowitsch's fascination for the medium of the book and its material qualities that he addresses with his "transilluminations," photographic series that bear titles like On Travel (1998–2004), Tristes Tropiques (2004), and We Are Family (since 2010). In the entire "Flaubert Complex"—beginning with the project Bibliotherapy meets Bouvard et Pécuchet (2002) and including the works of the current exhibition Emma's Gift inspired by the Flaubert novel Madame Bovary—the artist is concerned with the overriding theme of the hallucinatory effect (in the widest sense) of the notorious literary material.

In his artistic work, Rémy Markowitsch gives visibility to and realizes the powerful images that reading literary classics evokes in our imagination. The artist thereby makes use of the key scenes and aspects of the texts in question. With his subjective selection, is it as if Rémy Markowitsch not only held a magnifying glass over a single, very specific aspect or component of a text. He also fuses it in a surrealistic exquisite corpse with another component that he takes from a completely different source and that expands the first item's space of meaning substantially – especially into the realm of the abyssal. Rémy Markowitsch's source for his exhibition Julien in the gallery EIGEN + ART Leipzig is Gustave Flaubert's The Legend of Saint Julien the Hospitalier, approximately as is written there:

His parents' expectations of their son Julien could not be more contradictory. The mother wishes her son as a saint; the father invests in the heir to the throne and trains him in the arts of the hunt and war, so that the son will become strong and powerful. Both expectations are tied to prophecies and, following the principle of the religious legend, both prophecies are fulfilled: Julien will become a murderer and a saint.

Gustave Flaubert narrates this legend in the Trois Contes, the Three Tales (1877), whereby he wrote La Légende de St Julien l'Hospitalier (The Legend of Saint Julien the Hospitalier) first, but placed it as the second tale, between A Simple Heart and Herodias.

Julien's dionysian, bloody/wild career begins in his boyhood when he intentionally kills a little mouse in church, continuing with his splatter-like killing of all the animals in the forest to fulfill the prophesy of the black stag killed with a arrow – namely the murder of his parents. In sheer inconceivable divine generosity, he finally becomes a saint on the water "in a flood of raptures".

"And that is the story of Saint Julien the Hospitalier, roughly as one finds it in a church window in my home region," Flaubert ends the Julien legend, ostensibly revealing his source.

For Julien, in his exhibition Rémy Markowitsch creates an "action painting" from an exact replica of Flaubert's toad-shaped inkwell, resulting over the course of the exhibition in a series of works that accrues at the rate of one piece per day and carries the nonchalant title "Chapeau Crapaud!" in a respectful tip of the hat to the fabulous "author-animal."