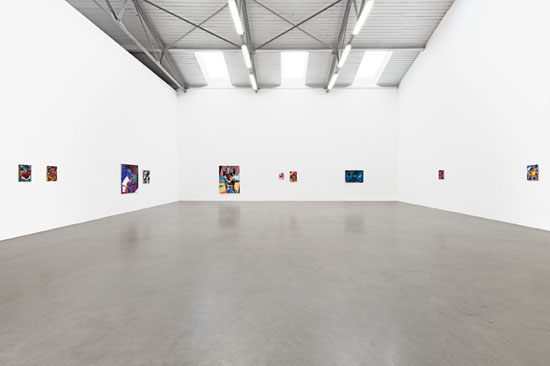 The utterances of such an un-colloquial dialect “Vom Leben” already let a piece of Tom Anholt slip into the gallery, clearly not a native speaker yet he shows himself to be somewhere; halfway perhaps…or trying to be here, present between his past and his future.

This status present is for Anholt the conceptual blood and bones of his latest series. He has stepped out of this head and into his eyes to conjure the images laid out on both, linen canvas and wooden boards. The vibrant colours and swerving patterns playfully veil and add perspective to the figures that fill his life. Starting with his girlfriend Yildiz, Anholt began to sketch her, breastfeeding his first child, Ada. He states not with the intention of allowing it into his professional practice, but after he took the sketches to the studio and began extracting the pencil lines into the paint. He found a direction to pursue which in his mind took him back to his own childhood. One that was filled with art from life, which he reflects could be why he always painted from his mind's eye, a soft rebellion of his own making. 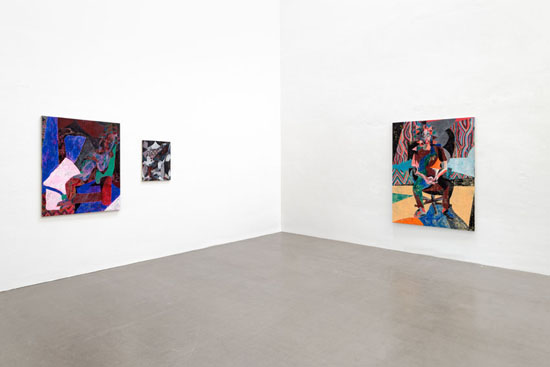 Standing back and looking at these smaller canvases of the familiar shapes and lines that he knew so well of Yildiz, the artist began to see he had started to pick up the tendencies of his newly born daughter's ways of seeing - direct, immediate and local. This lead to him inviting friends into his backyard Kreuzberg Studio, catching up with them sketching them and later carving them out onto the canvas. A present immortalised with fluoro pigments and umbra, lilac, rose soaked oils at times he fights against the surface as he adds glass beads into the paint which creates a sand-like texture inside the geometric landscapes. This fight was something that was more than just creative for the artist, as he began his new way of working. It spilled onto his vision, seeing who was missing from this compilation and who he should invite next, his work becomes an emotional archive filled with his local, he eventually saw there was one person missing, himself. The figure you see turned in, watching his surroundings not the art world is Tom Anholt.

What Anholt has expressed in his deeply personal foray is a rejection of the extrastatecraft which is constantly subsuming us. He explores the idea of being satisfied, enjoying the present not projecting into the future. Time has stopped for him, this state of being is an extremely acute emotion typically known as being content, it should not be a luxury state but in today's world to sit inside it seems to be. We are constantly battling with a landscape that pulls our mind down various potholes and drains. The attention economy, in which we live in is a parasite that eats away at any chance of becoming captivated. We notice Anholts simple but astute way of trying to dissolve that, the way in which he captures his sitters by hand rather than in a digital pixel frame. His acts slow down all the interactions he has in his life, letting him savour every inch of them not wanting to miss a second of his life. This is both an emotional and instinctive reaction to a world problem, Anholt’s works are not only there to show us his own life but to open ourselves up to our own. He uses the white cube, as a Faraday cage to shield us from the neoliberal swamp of our own making.