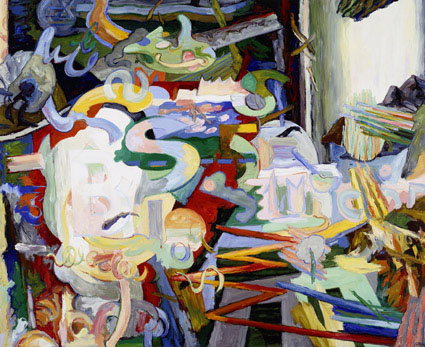 Uwe Kowski combines linear structure and planeness in his canvases and watercolours. In doing so the skilled sign writer, who studied painting and graphics at the Hochschule fuer Grafik und Buchkunst Leipzig from 1984 through 1989, extends the lines driven by colour plains by text and writings. After a first impression of abundance and complexity, the seemingly accidental opulence appears as an intended composition scheme. Step by step the framework which links the detailed elements is becoming clear. Like a coordinate system it gives hold to the emblematic structures. Thus the searching eye is following a range of associations until it orientates itself in this system of lines, signs and consciously chosen colour fadings.On his way across the large-scaled canvasses the viewer ranges between forming and atrophy of form, from antiform to rythmically arranged fragments of writings. Partly one considers the hint of an abstract landscape. But leaving that one point in Kowskis coordinate plane, one will find oneself again in a new infinite loop of layers. To open these up, intuitively a kind of layer-excavation begins, equal to the archaeological stratigraphy, by the means of which the picture-space can be read step by step. Within this circulation Uwe Kowskis pictures refuse explicit, situative narrations and thus also the titles are rather bricks in a line of association-chains than  descriptive annotation of a compact execution.The solo exhibition ‚Uwe Kowski. Malerei 2001-2008' at the Kunsthalle Emden in 2008 presents a broad overview of his work as a painter. The so far most detailed monograph about Uwe Kowski  has beeen published on that occasion. A solo exhibition of current works by Uwe Koswki can be seen at the Lippische Gesellschaft Schloss Detmold.