Despina Stokou
The royale we
Solo Exhibition
April 3 until May 10, 2014
EIGEN + ART Lab

The solo exhibition that opens on 3 April in the EIGEN + ART Lab is showing current works by the Greek artist Despina Stokou in the rooms of the former girls' school. The exhibition, titled, "The royal we" will be on view until 10 May; the rooms will also be open during the Gallery Weekend from 2 to 4 May.

Despina Stokou's works can be read as painting and installation at the same time. The artist, born in 1978 in Athens and now living in Berlin, turns her canvases into objects. Her works are not only hung, but also stood up on the floor, on shelves, or on boards. She colors the canvases with oil paint, felt pen, chalk, or spray paint. She writes on and glues things to the surfaces of her large-format works, using photos, letters, and texts in layers on the surface.

About her own work method, she says that she paints as she writes, beginning at the top of the surface and moving systematically to the bottom. The gesture of scribbling, expressive painting, word fragments, and collage-like layerings recalls Cy Twombly and Jean-Michel Basquiat.In her works, Despina Stokou traces the world of everyday life and the existential themes of life. 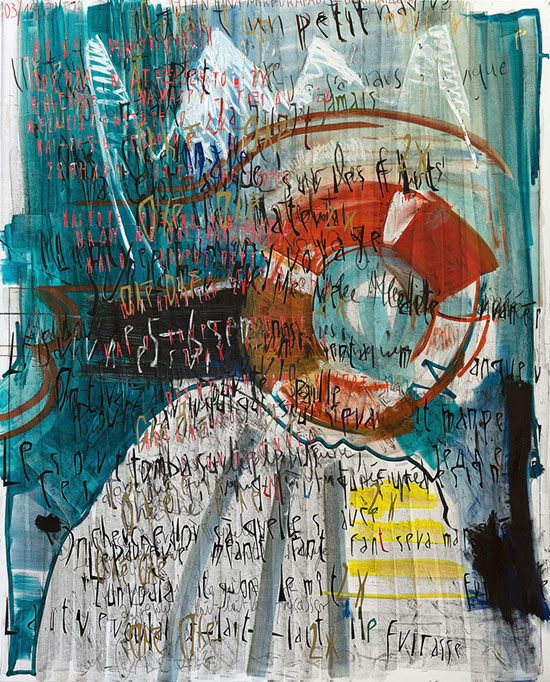 She explores various forms of production, collective thinking and self or external perception and focuses on the handling of information in general and especially the one that is digitally available on the World Wide Web. How is digital information generated and processed, how to deal with it? The artist brings this information to another level, analogue to the canvas. She deliberately falls back on data from previous years that are still available and contradict the timeliness of the digital world, but reflect the fullness and eternity factor of the World Wide Web.

She does this with logical consequence, overlaying texts, letters, and pictorial fragments on a theme, for example in the work Lady Ghisgaine (pink), which bears the name of a luxury yacht. Here Stokou deals with the object of the luxury yacht as a means of staging oneself. Scraps of words taken from the rankings of luxury yachts are overlain with expressive scraps of pictures. 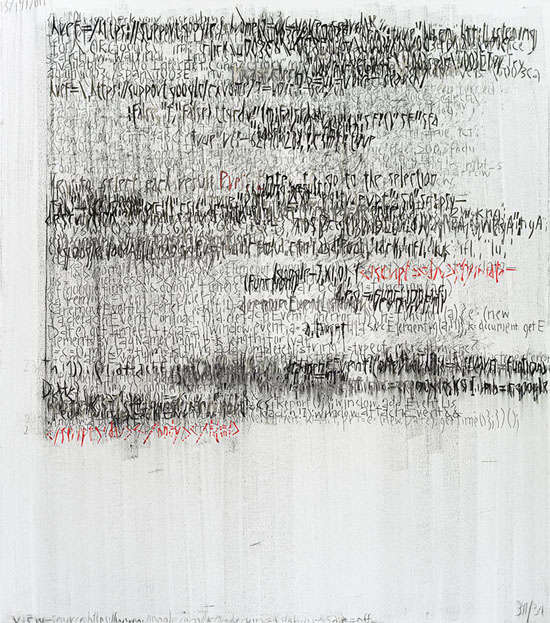 In another work series, she addresses, even more directly and more radically, the question of perception by others. With painterly components, she overlays the HTML threads of a Google search for her own name, condensing it into a new narrative form. In her works, Despina Stokou always mixes up the viewer's accustomed images, forming new, complexly readable and impressive pictures.