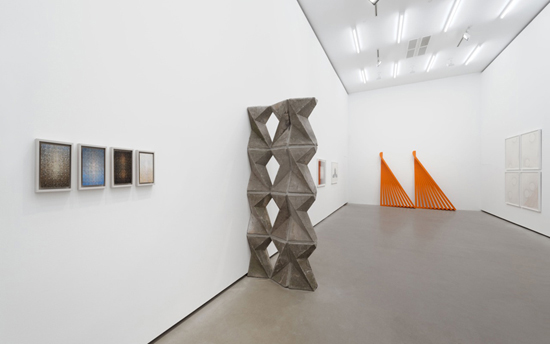 The first pictures with which Karl-Heinz Adler rediscovered himself as a concrete constructivist artist in the late 1950s were collages. The artist organized basic geometric forms such as triangles, sectors of circles, rectangular bars or squares out of paper in subdued shades of gray, blue, or ochre to form regular arrangements on simple cardboard. These early "Schichtungen" (layerings) – as the artist (*1927 in Remtengrün, Vogtland) calls them—are reminiscent of elaborate geometric choreographies. Triangles shift into one another in strict formations or fan out into rigorous symmetrical arrangements. Form and a reduced color palette (Adler restricts himself to two basic colors per picture) merge to become a clear aesthetic unit. This art is based on practical experience. Adler, who at the time, was still teaching students of architecture at the Technische Hochschule Dresden and experimented with serial systems, realized that "it is possible to create highly diverse spaces that radiate an imaginary effect by layering simple geometric elements while observing specific principles."[1] This discovery captivated the artist from then on. "I wanted to point out the wide range of different possibilities there are in the original form on which these spaces are based. I was interested in the partially completed results of a movement between its starting point and its endpoint, as well as in the partially open movement that can be continued by means of further layering."[2] A basic constellation is played through in a series of variants. The production principle of layering in geometric precision also remained a recurring motif in later series of works with different materials and techniques. In the delicate watercolors and glass objects that Adler produced in the 1970s, for example, the areas fan out to produce discrete, poetic nuances of color saturation. 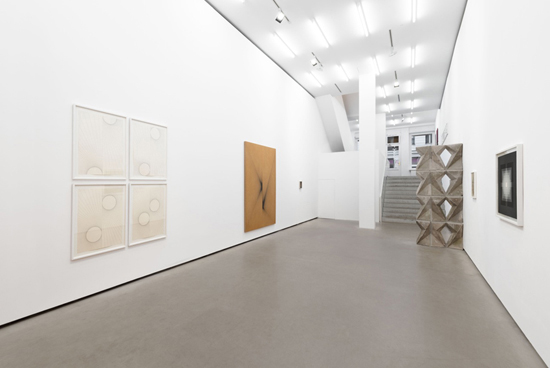 According to the art scholar and author Britta Schröder, concretion "is a principle that generates composition. What is demanded of the artist is first and foremost dispensing with the use of representational prefigurations; the goal is the unrestricted realization of purely pictorial principles."[1] Adler's geometrically inspired work did not fit into the framework of a socialist, realistic art prescribed by the "Socialist Unity Party" of Germany. This is why his art was only essentially allowed to be shown in public during the GDR era—or only against the massive resistance of the authorities. He is therefore counted among the "nonconformists," such as Carlfriedrich Claus (1930–1998) or Hermann Glöckner (1889–1987). In the mid-1970s, the artist wrote in his diary: "Four factors are characteristic of my work:

1. The mysterious, in particular the magical;

3. The principle of the series;

4. The practical application of 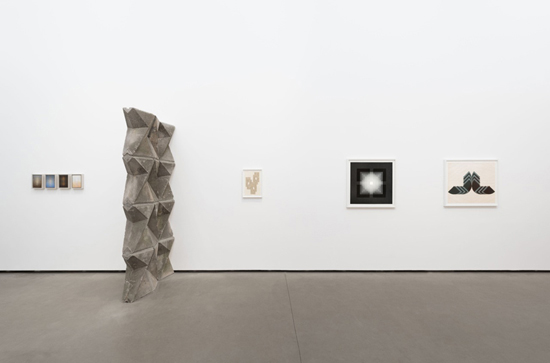 Part of the contradictory history of "Eastern modernism" is that despite all obstacles, Adler's aesthetic influenced the everyday experience of many people in the major cities of the GDR. Along with his fellow artist Friedrich Kracht (1925–2007), he joined the production cooperative of visual artists Kunst am Bau (Art in Architecture) in Dresden in 1960. As a duo, Adler and Kracht were very successful as producers of a "range of molded concrete blocks for the sculptural-decorative design of walls." The "producing system" was based on a building set with twelve basic modular forms, approximately sixty by sixty centimeters in size, whose sculptural form was based on a linear guide that allowed "any kind of vertical, horizontal, diagonal, curved, or randomly ornamental arrangement."[1] Production of this range of molded blocks actually began in 1970 at the "VEB Stuck und Naturstein" in Berlin, a state-owned company that supplied stucco and natural stone.

of the museum" and "as a much greater influence on the attitude towards life that the aesthetic of its time may have had." Maak argues that "Minimal Art has [essentially] again landed where one of its origins lay—in serial architecture." According to Maak, thanks to Adler "the residents in the new East German satellite housing estates waited, met, and kissed in Op Art made out of concrete."[2] Even though a large share of these molded block artifacts have meanwhile been torn down or are overgrown, today, thousands of images of ornamental concrete surfaces that serve as partitions in public space, as façade elements, or are piled up to constitute decorative columns are put on the Internet by enthusiasts of modernism due to their timeless appearance. 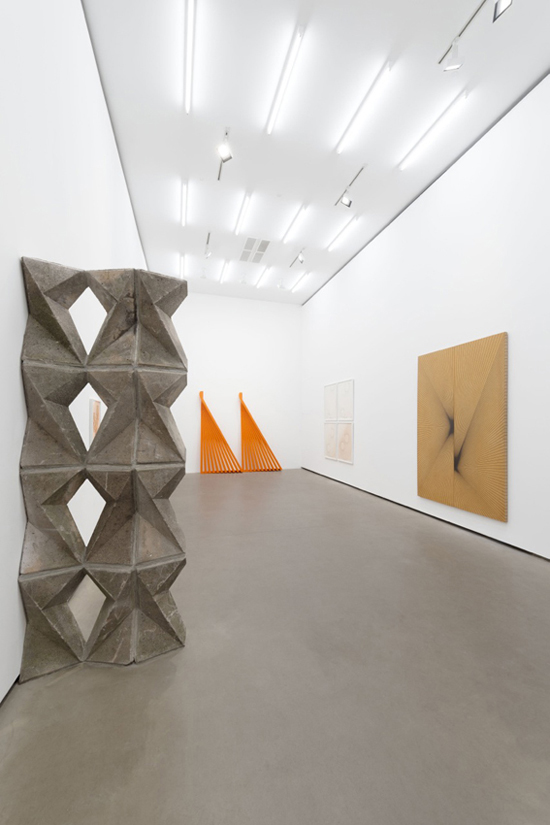 In his art, Adler has continued to further advance the basic principle of seriality both in the line as well as in the colored area. With the "Serielle Lineaturen" (serial lines) he developed in the second half of the 1960s, he radicalized the play with reduced form and spatial illusion. Viewers are literally sucked into his illusory pictures. In the 1990s he once again began dealing intensely with color layerings in which the former geometric rigor is combined with a painterly gesture. "White paint is applied with a brush in a flocculent way to a natural-colored ground, i.e. canvas, cardboard, paper, pressboard, wood, etc. This creates a support—an apparent trampoline of light—that permits the later glazing, multiple layers of paint that are applied to breathe with a wealth of color value and enables fine differentiations. It supports the shadowed area of the color."[1] For Adler, art is the "refined philosophical view of the world with the aid of pictorial means,"[2] which on the one hand can be derived from the "laws of natural manifestations recognized and interpreted" by the artist, and on the other hand itself contributed to "the cognitive order of the world." At the same time, Adler's aesthetic universe is not one that is sufficient in and of itself. Quite the contrary: as a sophisticated search engine for knowledge of the world it always aims at its vis-à-vis, ist viewers, and its users.