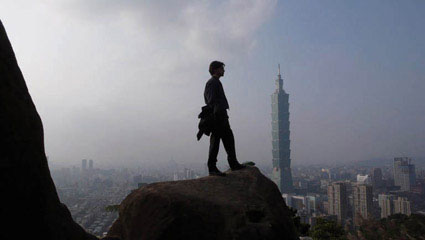 In his Film „habitat", Maix Mayer continues a filmic cycle (after "canyon" in 2006 and "abg" in 2007), that interdigitates -specific to media- the theme urbanity with questions of perception. The artist constructs works based on his interest in the methods of science and language systems of cinema, as well as the fine arts.„Habitat" is set in a kind of simultaneous action on two islands in two cultural areas, which the protagonist visits and which create two complementary habitats of northern and southern hemisphere. These so different places are connected by realistic and imaginary journeys of the protagonist.An underwater laboratory, an Asian metropolis, the ocean and the architectural solitaire of an almost unknown GDR - modernity (Ulrich Müther) are providing the area of action.In these zones, the protagonist of the film is accomplishing his movements of search. The open and closed capsule-like shaped architecture; contemporary urban spaces and the views into landscape are building up a complex network. Heightened points of view are turning into observation decks of oneself. The hero of the film acts as a modern archeologist of the special images of society, while we watch him and us during it's decoding.An historic review: The Israelian architect Moshe Safdie created for the world expo in Montréal 1967 the housing estate „Habitat". Japanese architects, who were combined under the name of "metabolisms", inspired this condominium. They transferred the thought of a lifetime circle, from birth and growth, onto urban planning and architecture - which ended in swimming cities and urban utopia. Maix Mayer's " habitat" is reconnecting this historic potential with our presence. The shrinking of certain regions of the northern hemisphere and the growth of the southern hemisphere are building a paradox continuum.