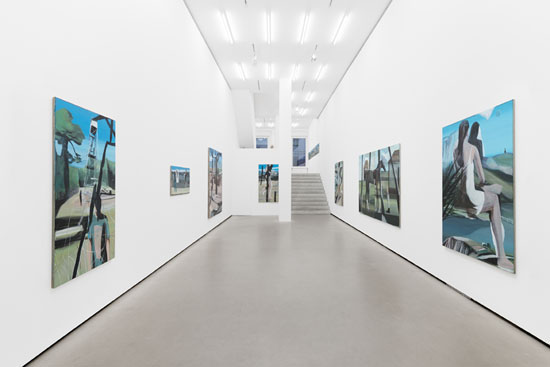 Cropped forms in the process of appearing or disappearing, in some cases isolated, in others intermingled with similarly unstable, more or less marked efflorescences. Effects of transparency and opacity. Distortions of scale and other anomalies. Broad expanses. Enhanced now and then by mostly unobtrusive buildings or items of furniture. Blue sky. Male and female figures whose features have been erased. Intimating a movement or reduced to a point of inertia. Sometimes with their backs turned. Sportspeople. Horses. Birds. Plants. References to a history of art either real (Stubbs, antiquity) or fantasised (self-reflexive embeddings of abstract pictures, two of which are to be found in one of the very few interiors by this artist). Unidentified objects that occasionally betray themselves through cast shadows. And lastly and most importantly, "painterly" signs, seemingly hanging suspended and wrenched free of all representational logic. Unless serving as expressions of states of composition or de-composition specific to the metamorphoses mentioned above. Data that situate these pictures by Marc Desgrandchamps in the (dis)continuity of his earlier works, doing so via methods old and new, enlarged on or inaugurated, which reflect the scope and array of his styles and techniques. The range of "painterly" experiments resorted to during recent years – not to say decades – leaves Marc Desgrandchamps free to choose between paths established, renegotiated or in need of further exploration, and others either definitively or provisionally abandoned. Impossible to enumerate all the styles and painterly techniques he has fixed on for the pictures on show in Berlin. Remaining in the realm of the "abstract", we could mention a few: the black borders, and the furrows, encrustations and lines eroding surfaces sometimes spattered with odd little concentrations of dots. Marks left by touches of a dry brush. Rarely has the artist confronted us with such a diversity of complementary "painterly" signs in a body of work produced over such a short period. Signs combined with others more closely bound by the laws of representation, allowing Desgrandchamps to develop, as he habitually does, scenarios abounding in narrative potential; and, obeying in this respect a certain modernist tradition, scenarios simultaneously frozen in a time frame which, like a segment of a scratched DVD or video game – or simply one of the screenshots that often serve as sources for (details of) his compositions – would appear to have been excerpted from a continuous image flow. Here the resultant tension attains a level of intensity as enthralling as it is exhilarating. 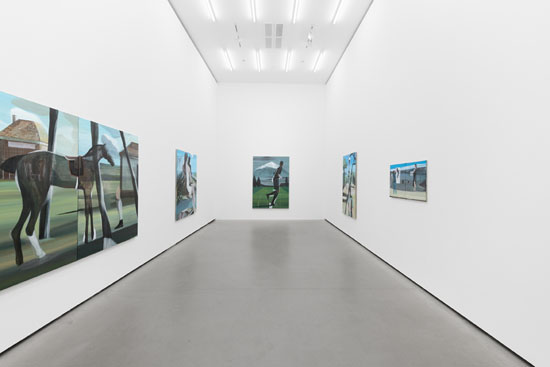