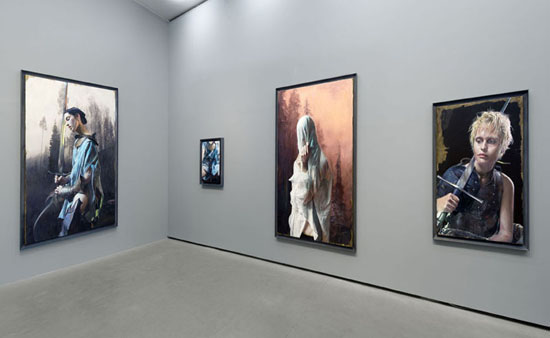 We believe what we see, conserve our experiences in pictures, and construct our memories from mere associations newly knitted together by the brain in the present moment which then creates an external stimulus.

The new works of Martin Eder revolve around the construction of stories and their unconscious emergence. A heavy melancholic mood takes possession of the sceneries, a colouring in the style of the old masters meets harmonious compositions. The trained eye will immediately draw on learnt historical motives and attempt to classify and connect what has been seen to what is known. Women in armour, torn linen fabrics, armed with swords, traces of acts of war on their faces. The theme seems to be of a historical one, but is omnipresent: women of war in battle, in combat. Amongst the overflow of catastrophies, natural disasters and war images, emerge female figures as warriors that we repeatedly see, as soldiers, in the form of mothers who protect their children or their villages with weapons in the Middle East, or on another front on Maidan Square, equipped with improvised armour of street signs, gaffer tapes and plastic containers. 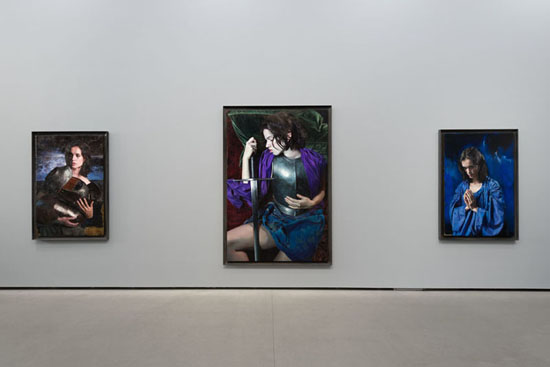 Martin Eder puts his characters into a fictional fantasy series and strings the images together as single frames – now and then, figures who were once alone in their frames and sceneries meet each other in a bigger image and grow stronger in the plot as if the artist zoomed out from the scene and extended the detail and the view on the story plot, since the size of the characters always remains the same. Martin Eder plays with our viewing patterns – instead of one single story, he constructs the season of a series, episode after episode, with an open ending, HD flatscreen instead of the big cinema screen. The output formats of the canvases correspond exactly to the familiar image proportions that have been specified by digital cameras for years, and consequently have been coining our image perception.

Just like in a film still the women are retained in a short moment in which the sword has just been pulled out or put down. This "fruitful moment", a term coined by Lessing in his Laocoon, triggers the story that unfolds in the viewer's head; "Fruitful is only that which lets the imagination play freely. The more we see, the more we must be able to add thoughts to it."¹

Yet, everything that we see is merely fake. The backgrounds in which the characters are to be seen have been created and constructed. Surreal worlds that could have been this way, but which actually are not. Pseudo-history. Enriched and decorated with the images in our minds, from uncounted movies, TV series, fairytales, and theater plays in which the lines between fantasy and „true story" are blurry. 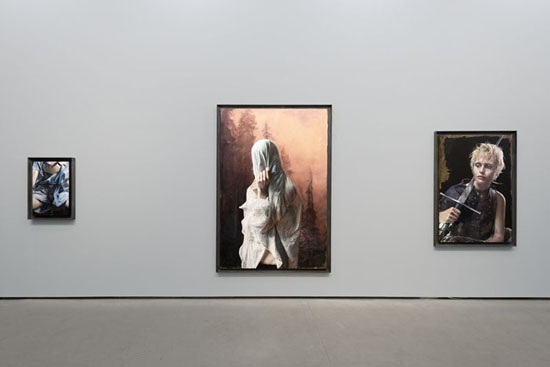 Our brain deceives us into knowing the story. We are led to think about the Middle Ages, the shinning armours, proud castles, the gruesome battles, the damsels and the kings, the dirty towns and the devastating epidemics and diseases, seen and read a countless number of times in stories, art and history. But the relining done by historical evidence and facts cannot hide the fact that this story is after all based on the subjective impressions of individual witnesses that were passed on through the centuries. A memory becomes history, and out of history once again there is the memory of it. Simultaneously, memories and personal memoirs are the basis of our historical narrative and cultural identity.

The history of art equally is based upon the subjective representation of single artists and their filtering through exemplary art historians. Even if it reconstitutes according to theories and turns. The ones that have been left out of history since they had not been famous enough during their lifetimes, whose works might have been destroyed in wars, social circumstances or other forms of destruction, are obliviated or overseen and spared from public memory.

The ambivalence of Martin Eder's images resonates in the exhibition's title. Seeing only the bloody or doomed means of painting in the title Those Bloody Colours forgets the second meaning of the word as emblem, flag and therefore nationality, origin or border. Bloody banners, condemned borders.. again, the line of associations starts to unravel.

"Let our bloody colours wave! And either victory, or else a grave"
William Shakespeare, in King Henry VI.