Two bison storm a deserted railway station hall. The painting over the fireplace does not seem to fit the dignified atmosphere of a 19th-century salon at all. Not only did society once meet here; the hosts also used furniture and artworks to display what the wanted to appear as. The salon as a narrative space of dreams and stories. Things are quite loud in the room Melora Kuhn created in the gallery space. Here, North American art and settlement history, wars and romanticism move very close together. New stories are unpacked, what was forgotten is dusted off, and this always in the knowledge that polyphony has long since taken over the space. For pictures, like spaces, are constructions. 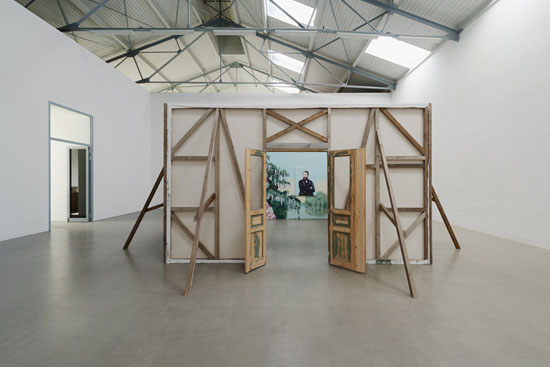 The wall motifs quote the natural landscapes of the Hudson River School, the current of North American art history that shows humanity and nature in romantic harmony. It thereby lets the memory of the period’s conflicts and wars fade – quite the opposite of the two bison over the fireplace. Declared the national animal of the United States by President Obama in 2016, “intense hunting” since the middle of the 19th century led almost to its extinction. The animals died to become soldiers’ boots or provisions for workers building the Central Pacific Railroad. The bison were shot dead from train windows. Buffalo Bill racked up as many as 60 animals in a single day. 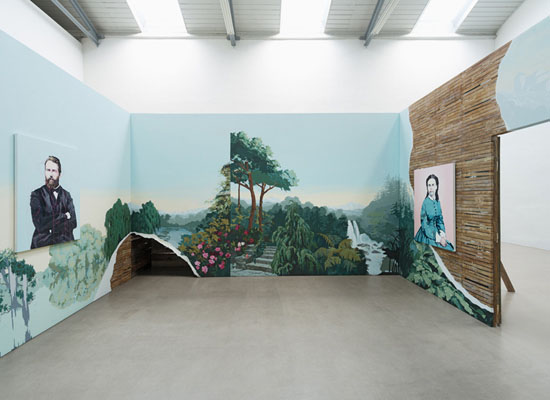 The portraits on the walls are based on photographic templates. Melora Kuhn chose Olive Oatman, who bears the tattoos of the Mohabe Indians, and Herman Melville. The author of Moby Dick and Bartleby is considered a representative of Young America, a group of writers who were dedicated to democratic culture. 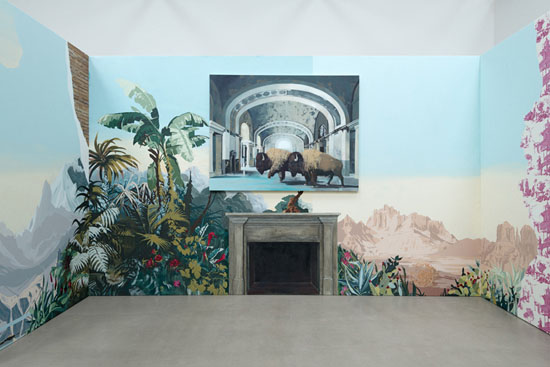 Stories and history compete with each other, just as the room competes with the room within the room. The latter resembles a theater backdrop in which the role of the speaking character is shifted. In her works, Melora Kuhn recalls silence, clamor, and the many negotiations about them.

You can have a look at the exhibition with a 3D video by Steffen Sommer here.