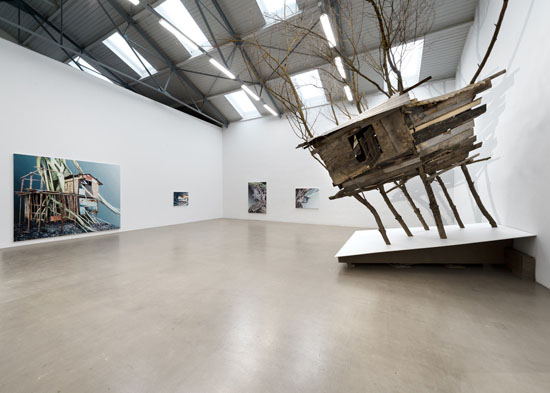 The days in the year when day and night are equal in length are called equinoxes. In March and September, the months when winter becomes spring and summer becomes fall, when the dark season becomes the bright and vice versa. Celebrated since Antiquity in various cultures as an important turning point, one steels oneself for the cold season or celebrates the reawakening of nature and of light. If one condenses the annual cycle to a single day, then the equinoxes correspond to twilight and dawn: neither day nor night, a moment when everything is suspended. This is precisely the situation that Mirjam Völker captures in her works. She varies it again and again in one theme, human housing in abandoned nature: cottages, barracks, refuges that no longer fulfill their original purpose of offering people or other living things protection and shelter.

The tree house that conspicuously grows out of the floor seems ready to tip over into the room at any moment. The branches that hold it are too rickety to provide secure refuge. The weathered wood, an entryway that can't be reached without additional means. The skeleton of the tree in which it nests casts shadows on the wall that don't fit the lighting situation in the room – a disconcerting simultaneity of day and night. 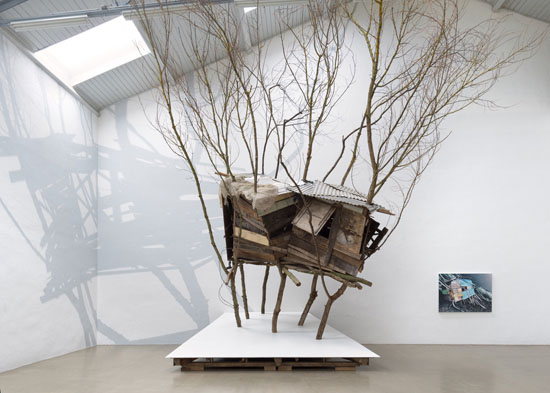 The play with fragile compositions, the interlocking of vegetation and space created by humans, is a recurrent component in the artist's painting, as well. Monumentality and intimacy are juxtaposed, not only in format, as in the large work Gehege (enclosure). Freed of every context, the roots grow out of the floor, but it remains unclear how far the trees tower up beyond the space of the picture. Are they really trees, or just lifeless wooden remnants? Is the house a relic of human civilization or a miniature model in a little bush, inflated into gigantism with a painterly illusion? We don't know, because every reliable scale, every clue is lacking. The diffuse light does not reveal whether the background is really sky or merely hollows in a studio in which the tree houses are illuminated like backdrops. The absence of shadows potentiates this ambivalent impression.

Mirjam Völker has perfectly mastered the repertoire of a painter's means. Each picture follows a precisely planned composition and is divided by diagonal lines that strive beyond the edges of the pictures and set them positively in motion. With her meticulous brushstrokes, she thereby creates surfaces so naturalistic that the paint peeling from the old roof battens seems to fray from the canvas almost haptically and the earthy debris on the ground seems on the verge of trickling out of the picture. Distortions of perspective give the cottages a dynamic and life of their own that sets the whole picture whirling and reeling, for example in the work Drift. Again and again, Mirjam Völker plays with transparencies: sections of the wall blur into parts of trees, cottages push from the front to the back as in a picture puzzle, and the blue plywood board that was a load-bearing wall just a moment ago becomes a pure color surface. Strong complementary contrasts, like orange-blue or red-green, catch the eye and, with their powerful brightness, form an additional contrast with the somber and threatening mood surrounding each picture. 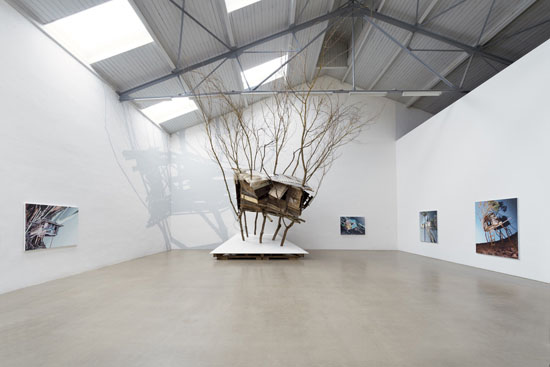 The pictures' titles function like characterizations of the individual cottages. Eremit (hermit) makes us think less of the housing than of the inhabitant, of whom, however, there is no trace. The title Die Wache translates as a guardhouse or police station, but also as the sentinel himself who protects someone or defies the night and remains awake. The title's meaning shifts, depending on how one reads it, like the picture itself.

Equinox, the thin line, the transition, the turning point. Mirjam Völker shifts foreground and background, brings trees grow forward through the habitations into emptiness, moves back and forth between flatness and three-dimensionality, as does the tree house she has built in the exhibition space, which unites all the ideas of her painting in one object. 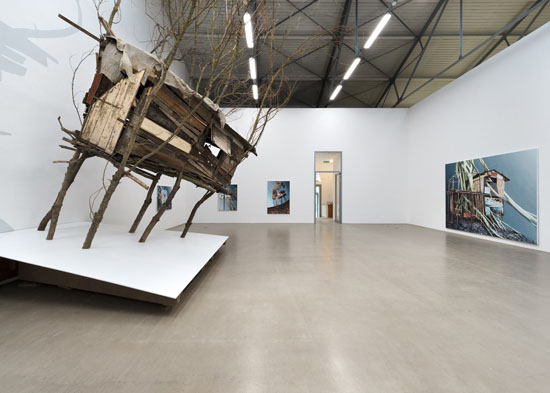