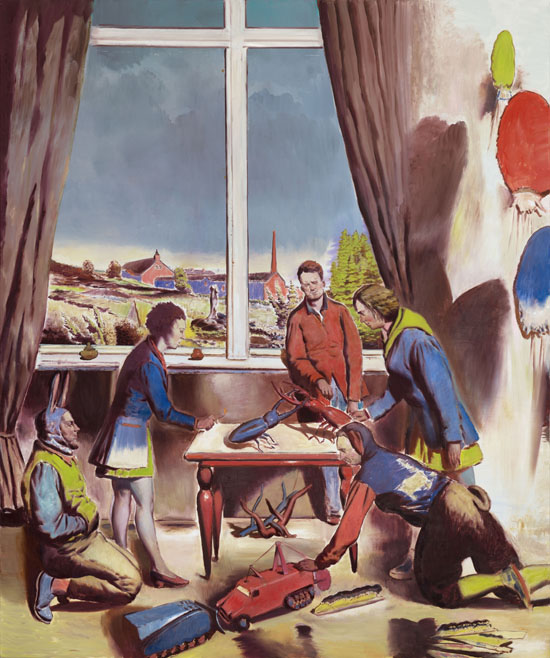 Each of the new large-format paintings in the exhibition Gespenster (Ghosts) opens the viewer's gaze onto a lively scene in which several simultaneous "shapshots" condense into a picture. A muted red-brown undertone suffuses the pictures, out of which the few bright colors in the protagonists' clothing stand out all the more. The blue spring sky that still dominated the background in Rauch's last pictures from 2012 is displaced by sunset-red or gray-blue rainclouds, the last remnant of a thunderstorm; the sun is just now peeking out again from behind them.

In Das Treffen (The Meeting), one sees it behind a huge window frame, below which five figures have congregated without communicating with each other. One recalls the green-, blue-, and red-clothed saints in Giovanni Bellini's Sacra Conversazione, but the central point of the scene is not the Virgin Mary, but a table on which a red and a blue stag beetle wrestle. Below that, the drama is repeated in two intertwining branches, and it plays out in the foreground again in the encounter between two futuristic toy cars. Odd caps with rabbit ears replace a halo; old-fashioned, outmoded costumes replace the saints' robes. Each figure seems to be part of its own story; only the similar coloration of their clothes and their coherent composition bring them together in one picture.

In almost all of his paintings, Neo Rauch confronts the viewer in a single picture with this simultaneity of different scenes that in part spatially and in part narratively overlay each other, leading him to sink ever deeper into the scenes in an attempt to grasp the individual strands. As if through a higher power or at the hands of an external string-puller, the figures are placed on their stages and usually first take their final position in the picture in the process of painting.

In Rost (Rust), a brown-colored man – or is it a rusty sculpture? – floats out of the hands of the figure of an assistant standing on the right-hand margin of the picture, as if he wanted to take literally the step from one pictorial space to another. But in the center of the picture he is already caught up to by two figures placed on the edge beforehand; the latter cross the picture, turning their heads back as if they wanted to inspect the strange abstract memorial on its rusty pedestal and the rocket lying on the ground. Immediately afterward, but simultaneously in the picture, they disappear in the bushes at the back.

Over Die Stadt im Tals (The City in the Valley) in the eponymous painting, a woman steps out of a red-glowing evening sky; with burning sticks, she ignites the canvas on the easel in front of her, and it seems to go up in flames. She meanwhile becomes a motif herself, captured in the sketchbook of the figure at the front right, seen from the rear, lying on a dark embankment behind which extends, not Caspar David Friedrich's chalk cliffs, but the city in the valley, bathed in orange-gold light.

The principle of the "picture within the picture" can be discovered in almost all the works in the exhibition. At the same time, the pictures reflect their own production, since Neo Rauch repeatedly captures the sculptor or painter himself in the picture or places his own portrait among the figures.

This becomes clear in Das Bannende (The Spell Caster): one's gaze pans from the kneeling artist in the front left who is painting a sculpture across the silent viewer in the shed in the background to another artist, whose pose and wardrobe come from the 19th century and who has created and may be giving the final touches to a monumental, luminously green-turquoise mythical creature with strange growths on its chin that could equally be teeth or a beard. Next to him, an elegant gentleman shows his female companion a completed, amorphous object that clearly could have come from the hand of the sculptor beside him to the left. One's gaze ineluctably sweeps back to the latter, circling again and again, from one green color field to the next; these fields are placed in the ochre-red-brown scenery like anchoring points along which the eye jumps, following the routine of the assiduously working artists.

Unlike in the large paintings, the brushstrokes in the small-format pictures at the exhibition are more draftsmanlike and softer; the scenes show isolated figures, as in The Stud Farm, or autumnal Central German landscapes, as in (September), that do entirely without the presence of people or any other population. Like a fragment from a completed picture that has become independent, the small city in Ankuft (Arrival) lies in violet evening light, an almost classical landscape panorama – if it weren't for the huge geometrical tower rising into the sky, merely to pose a new riddle to the viewer.

Neo Rauch's works have been on view in numerous exhibitions since 1993:
Solo exhibitions including in the Haus der Kunst, Munich (2001), the Kunsthalle Zürich (2001), the Albertina, Vienna (2004), the Kunstmuseum Wolfsburg (2006), the Metropolitan Museum of Art, New York (2007), and the Museum Frieder Burda (2011). In 2010, Munich's Pinakothek der Moderne and Leipzig's Museum of Fine Arts organized a retrospective exhibition in which, in two parallel solo exhibitions, about 120 of the artist's works were shown. The first solo exhibition in Belgium was opened in the Bozar – Palais des Beaux-Arts in Brussels with works the artist created between 1993 and 2012.