"he could hardly remember how long he had been at this place already, yet somehow it now seemed enough. although it wasn't so bad either ... but somehow. at least after he had had another look round while walking about.
of late all cars seemed to be painted only black, even the windows. not bad actually. but first of all get some sleep or read something. switch a few accounts to off and take it from there tomorrow." 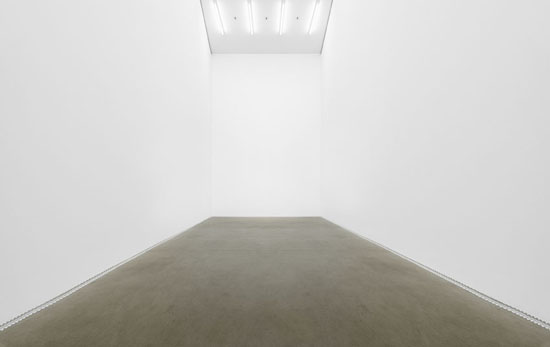 Lying on the floor of the Gallery's exhibition space there is an almost 28-metre-long necklace chain of transparent crystal-glass beads. It lies at a close distance to the walls and marks the extent of the exhibition area. Visitors who enter here cross over the boundary marked off by the chain and find themselves within the 55m2 large area which forms the heart of the Gallery. The Gallery's entire exhibition space was re-shaped in 2013, the two-storey structure of the former retail shop being replaced by a 5.3m high "white cube". 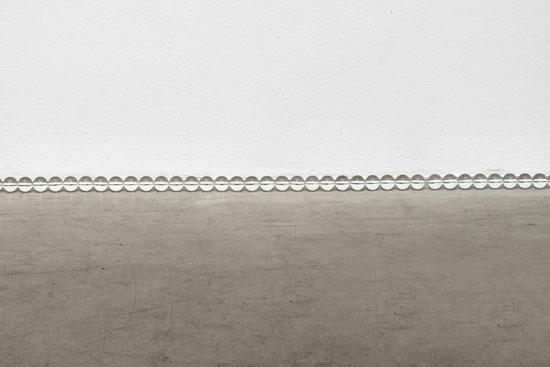 The gesture of marking out the surface area and the choice of material focus in on this newly created "real estate". First and foremost, they present the Gallery as a place in which values are not only traded and negotiated, but which is a value itself in its own right. The necklace not only marks out and represents this value, but it encompasses the floor surface in a wholly specific way and, as a work on display, is itself an assertion of value.
The installation entitled "The 673rd Morning" is accompanied by a publication of the same name – a newspaper that stages Hugo von Hofmannsthal's "Das Märchen der 672. Nacht" ["The Fairytale of the 672nd Night"] from the year 1895. Hofmannsthal's text begins in a familiarly fairytale-like tone and tells of a young, well-to-do merchant's son, who cultivates an inwardness cushioned by wealth in a world of aesthetic perfection. Very soon, the tale changes into a text of yearnings, wishes and fears, increasingly resembling more a nightmare than a fairytale.
In the publication, the text is interwoven with an endpaper and a multi-part visual "essay". The latter is composed of advertisements with which companies are currently wooing clients from precisely that social stratum represented by the young merchant's son in Hofmannsthal's fairytale with offers of investment opportunities, of consumer goods and, above all, of modern-day "wealth management". In these advertisements, riches appear as a form of affluence whose social and societal character has been completely "naturalized" – wealth is a creature, a being towards which its owner appears more emotionally and morally obliged than economically or politically active. The images and text have the effect of mutual echoes, which activate one another and place each other in perspective.
In the central axis of the advertising images is the drawing of a necklace with punched out spaces whose spherical dimensions match the beads on the crystal-glass necklace in the Gallery space. 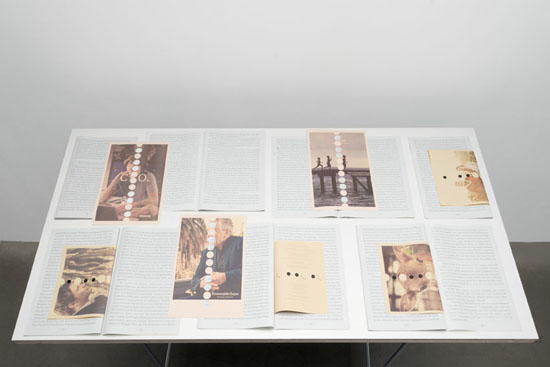