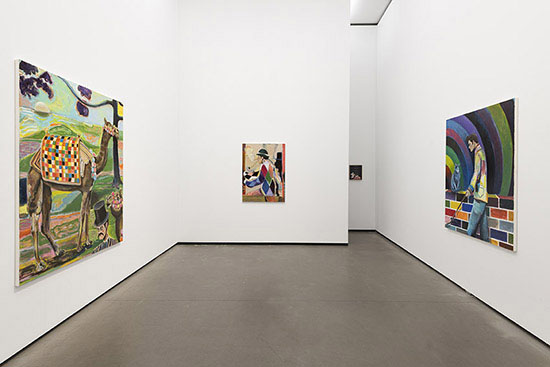 Ryan Mosley's paintings have always been precarious, knife-edged, intuitive things, characterised by their exuberance, headlong free-wheelingness, sucking in motifs from the drifting, ever shape-shifting worlds of circus and carnival, the brawling anarchy of Dada. Rooted in figurative impulses, they revel in the bizarre, the improbable, the unpredictable and the grotesque. They are self-delighting, self-enclosed worlds of abandonment, staged performances, theatrical presentations which we willingly spectate. And behind them we have always felt the shadowy presence of all those artists who have helped to shape them, from Daumier to Kitaj, Hogarth to Degas, Manet to Picasso, Léger to Darger. 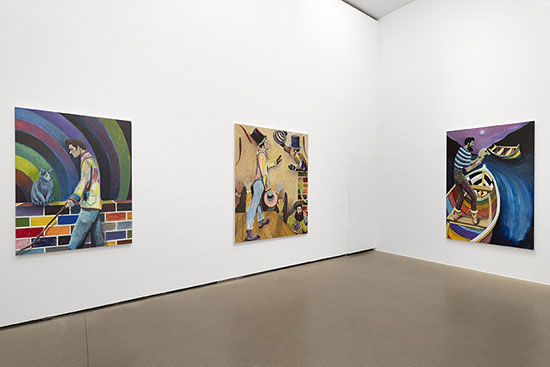 Until now. His fourth solo show at Galerie EIGEN + ART marks a shift of tone and feeling. Its title, A planets revolution, nods in the direction of our political uncertainties as never before. A mood of perplexity seems to transform the romp of his heightened colours into exaggeratedly desperate throws of optimism.

In the painting Songs for the sea a violinist fiddles in a drifting boat, scrutinised by men in another craft, which appears to have eased alongside. Another man, preoccupied by the skull that he is gripping, drifts, oars abandoned, across uncharted waters in the work Lonely was a mountain. A planets revolution shows a sombre man walking his dog, troublingly self-absorbed, watched over by a predatory cat. Individual human faces, realistically rendered in their anguish, as never quite before, replace the romping grotesquerie of the past. The symbolic presence of water menaces threatens to engulf. In two of the largest paintings in this show, humanity is afloat upon it, helplessly, every man an Odysseus seeking out a homeland. The water itself looks almost sculpted, its curves gouged. And is there not more than a recognition of the passing fragility of the world in the way that he has painted the camel with such tenderness in Under a strange canopy?

In Let in life he paints a gaunt-faced, sombre woman in profile - there is more than a hint of the lonely pessimism of Munch about her - smoking a long-stemmed pipe. The pipe smoke creates a sharp, eerie triangle of sick green, which outlines the shape of her head. 'My grandmother used to say,' Ryan remarks, 'that if you see a woman smoking a cigar, it means she is tough.' The toughness needed for survival perhaps.