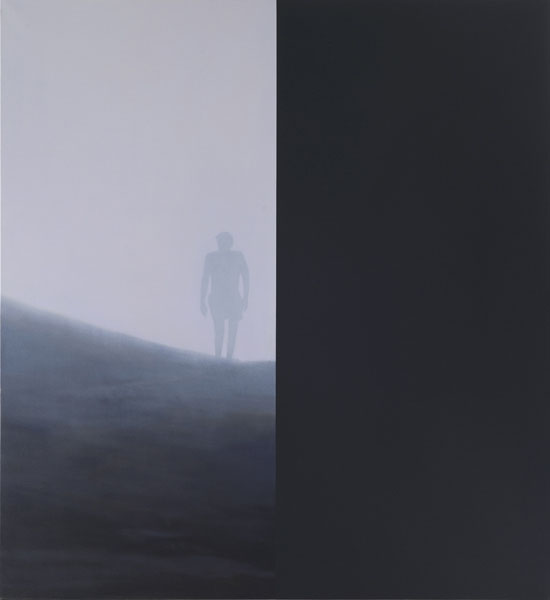 „There might have been a painting that was like an outsider, and therefore perhaps not part of the exhibition. If we remember it right, it shows August Strindberg asleep, his head laid on an eiderdown, something soft and impressive, hair and moustache slightly tousled. A horizontal strip, that is, a surface in which we see him like in a mirror, cuts through the lower part of the picture. The image is ambiguous, maybe because Tim Eitel painted it after a found photograph, so that the perception in the image is not from the painter's own experience. He is working from the perception of another, and that other is Strindberg sleeping. The horizontal strip, often present in Eitel's work, here is like a dream image or perhaps the next frame on the film. If we were interested in the original document, we might recognize in it a self-portrait that signifies an experimental photographic practice. Strindberg had set up a portrait studio, where his challenge was to transmit and capture thought, and thus record an invisible operation. His method involved making life-size portraits and working with very long exposure times during which the photographer had to engage in telepathy with the subject observed. Then Strindberg dropped off to sleep. 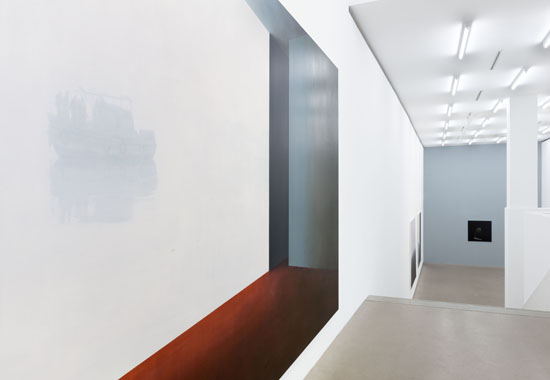 So maybe there is this piece apart, or else a piece that is perhaps invisible, but which still gives a perspective on the preoccupations permeating this exhibition conceived by Tim Eitel "as atmosphere". While the successive layers, coverings and erasures on the canvas tip the images over into painting, we never quite know if the black suns are luminous, if night is falling or day breaking, if the figures are disappearing or appearing, if they persist or come back to the surface, if we are looking at an image or its ghost, an empty space or a monochrome plane. Tim Eitel subtracts or abstracts each subject from any narrative space and tends to install it in silence and time to subject it to observation and variation. The image is slowly defined as if our eyes had to become accustomed to the dark, in order to glimpse the nuances, the depth, and then see the head of a Japanese Buddha come to the surface. There will invariably be a Buddha's head, a tree's shadow, a ghost, a mass of hair or a body in a paradoxical state, beings ready to shift into another reality or into another order of painting, beings ready to haunt the Hard Edge. There will always be an operation laughing at Greenberg's narrative of modernism, and becoming interested in its esoteric roots. There will always be a mystical shadow that informs the serious painting, and a place on the viewer's forehead where Tim Eitel sticks a Third Eye." 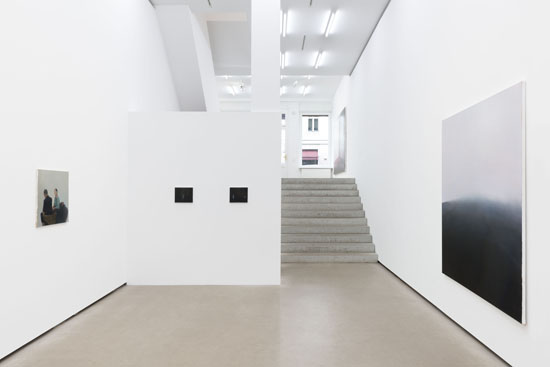