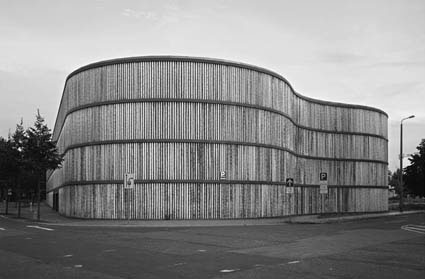 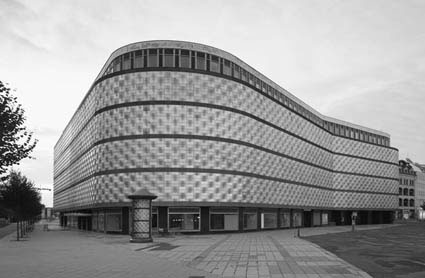 Before studying photography at the Hochschule für Grafik und Buchkunst Leipzig in the class of Astrid Klein Maix Mayer completed his degree in marine biology in 1987 gaining the diploma in Marine Ecology. In his photographs, films and installations Maix Mayer observes the transformation of our society using the example  of urban spaces.

In his photographs architecture itself becomes the protagonist. Maix Mayer arranges architecture as symbols for social Utopias, as architectural icons. His diptych „double box" displays a store complex in one of the oldest streets of Leipzig called „Brühl". At the end of the 1960s this area next to the main station was reconstructed. In the course of the reconstructions the former Art Nouveau building got its today's facade. The photography of the so called „Blechbüchse" („canister") is opposed to a view of the parking block from 2004, which is located very close to the Zoo of Leipzig. The analogy of the buildings, which had been built in different times and by different architects, results alone through the visual description. This connection does not exist in reality and emerges only as fiction through the medial translation of the photographic image.
These processes of transformations can also be found in the film „raumgleiter" from 2005. The straight camerawork drives through the interior of the Museum der bildenden Künste Leipzig, but at the moment of recording the new building did not yet host any art work. This lack of function leads to an abstract room situation, which achieves an own form of representation and an own reality through the film as the medium. While replacing the protagonist by a puppet, the current film of Maix Mayer carries this to extremes. The setting is as well as in the film „habitat" a former, futuristic housing area, which has been demolished in the meantime.
The small sized, black and white photographs of the series „rg" are showing buildings of the architect and engineer Ulrich Müther on the German island Rügen, which Maix Mayer knew well since his childhood. The German construction engineer and constructor built spectacular buildings mainly in the former GDR and at the coast of the Baltic Sea, which had been used as restaurants, planetariums, multi-purpose halls or churches. These architectural portraits from the year 2007 are pointing in their sculptural presence to the photographs of „double box". At the same time they are connected to the series „Hanoi" from 2004, but here the assumed ideal city and its social complexity is focused. All images show townscapes and architecture of Halle-Neustadt. They represent Maix Mayers contemplation about the dichotomies art/architecture and on the Utopia of a fictitious society.
The term AUTOFIKTION originates in literature and describes a genre of autobiographical writing mixing fact and fiction on purpose. During the transfer of the literature in his process of artistic production Maix Mayer follows the question of what fiction is, how to recognize it in an art work and how far its boundaries can be extended. In an over-fictionalised world Maix Mayer researches the remaining reality, which he assumes in ones own imagination.
On the occasion of the solo exhibition „Was tun?" at the Guardini Galerie Berlin the film „habitat" by Maix Mayer can bee seen through April 24 2009. On this year's 24th International Videofestival Videoformes in Clermont-Ferrand the film had been awarded the 2nd price. Further solo exhibitions will take place in 2009 at Goethe Institut Taipei, Europäisches Zentrum der Künste Dresden and at Städtische Galerie Wolfsburg.
„If the doors of perception were cleansed everything would appear to man as it is: infinite."  William Blake