Painting with Light and Time
Apparatus by Ricarda Roggan 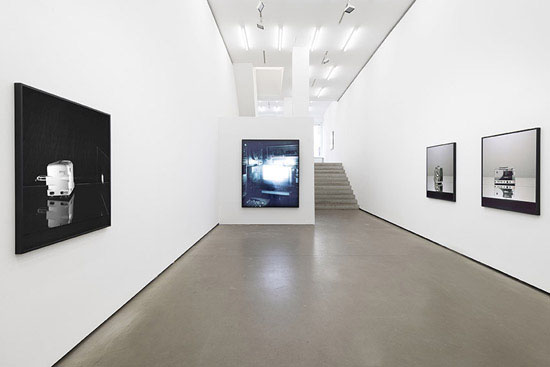 Heavy machines through whose gaps light penetrates into the darkness of the screening room: the special aura of the projectors has enthused Ricarda Roggan since she spent long, tranquil cinema evenings with them on a student job. The weight of the heavy apparatus, the subdued clattering of the motors, the airy flickering of the images in the movie theater. All these impressions waited a long time and tenaciously exerted their effect, to be condensed now in a new photo series that is more closely tied than usual to the biography of the pictorial artist.

Like everything that Ricarda Roggan arranges in front of the lens of her large-format analog camera, the projectors now persist in a kind of time capsule. They don't shout, "Look at me!" or "Get me out of here!" They are self-sufficient, modestly pleased that a stage is prepared for them once again. They persist, resting in themselves, and precisely because of that develop their own sober, completely unsentimental magic. They express a mute invitation to view them concentratedly and without disturbance.

In search of projectors successively taken out of service in the digital age of movie projection, Ricarda Roggan encountered a passionate collector who had preserved an almost complete collection of 35mm, 16mm, and 8mm projectors in several sheds in the garden of his house in Leipzig. All of them are machines that were taken long ago out of the circulation of commodities and function: a treasure just waiting to be retrieved some day by a museum, and now she has already done it photographic honor. From the chaos of the collection, the photographer separated out individual apparatus, chosen for the special sound of their names: Weimar, Noris, Ernemann.

Ricarda Roggan avoids dramatic effects, distilling with constant condensation and concentration the purism of a concentrated moment from restless, disordered reality. These clarified sceneries are illuminated only by their own light and the radiance of the projectors, which an ingenious system of reflections on glass panes and mirror surfaces guides across walls and through the room back upon themselves, where they are collected until the bodies, contours, and textures emerge from the darkness. Ricarda Roggan paints with light and time. In their sober objectivity, the resulting distillations are reminiscent of industrial and advertising photographs from the 1960s and '70s, the era from which the apparatus come. And yet, the pictures go far beyond mere product stagings. In the series Apparate, two previously separate working paths come together: the clarifying staging of a place, and stage set construction for small and large objects.

Depending on the intended effect, Ricarda Roggan photographed the machines in black-and-white or in subdued colors, or else presented them as a slide in a light box, whereby they leave new traces in the exhibition room, delicate shimmerings of light on the floor of museums and galleries. Sometimes the way the pictures are hung makes them reflect each other and enter into a mute dialog, a filigree field of tension.

The apparatus seem like beings from a past age lost in reverie, ambassadors of a tranquility wrung from the raging of modern times. This field of tension is extended with a phonograph record with 12 tracks reproducing the wide range of the noises the projectors make in operation and with a book in which some of the pictures torn from them in the sober staging are collected as film still shots, archetypal scenes from American action films, naturally empty of human figures. 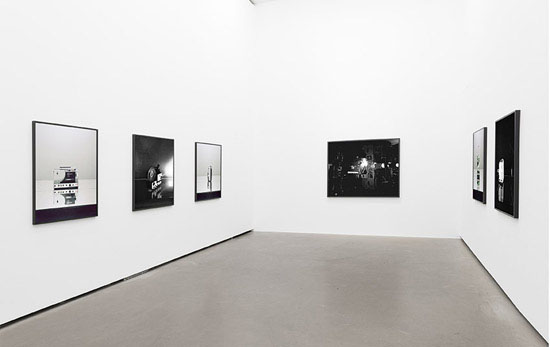