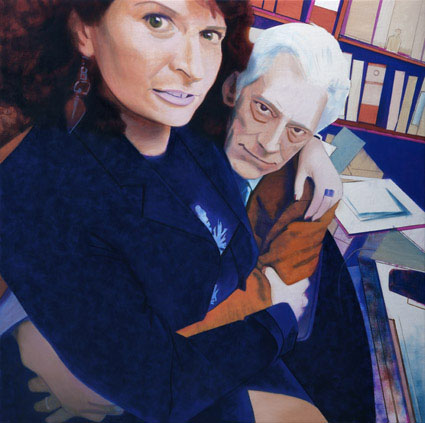 Over many years, Akos Birkás has developed an independent form in his abstract works, that allows to describe a transpersonal ego, a universal concept of human being. Here, his personal emotionality played a decisive role. At the end of the 90´s he started to turn towards figurative painting. Alterations in his life brought about changes in his working methods and finally a radical break in his painting. The idea of not dealing with the own ego but with other persons, with their relations, had a strong fascination to the painter. Akos Birkás aspired to a discussion on a new level of communication.If in the first paintings of his new period, his basic structures of painting were maintained - that ist the dichotomy of format, the incorporation of the space and the orientation towards the center -, then in the new ones there are crossovers to open spaces and free imaginations. There is an in itself reflection and at the same time indirect correlation to the abstract works. Tensions in this space and perspectives are displayed on undivided surfaces. The center is no longer dominated by the artists identity, it even disappears with the new themes and the figures are situated around an empty centre. The upright format is being replaced by a landscape format. Before paintings were dominated with mass, of thick, encrusted application of paint, that showed traces of life. Today his paintings are gentle and easy. A feeling of broadening in imaginary and openly composed spaces is being evoked.Also in his new works Akos Birkás view is focused on the essential. The coloring of the heads on each work are shaded to create an imagination of an assembly technique.His works are based on photographs that he has taken from his friends. The composition of these portraits are created by the individual tension to each person. In this way he indirectly reflects his own way of living by the expression of the other individual.Press fotos, which Akos Birkas collects over a period of time are used as base for the paintings. In this process he keeps all kind of different political, social, as well as film historical aspects in mind. In the re-usage of the photographs he sees a reflection on society. Coming from the portrait as a classical genre in art history, the paintng has changed to a medium which represents communicative situations.