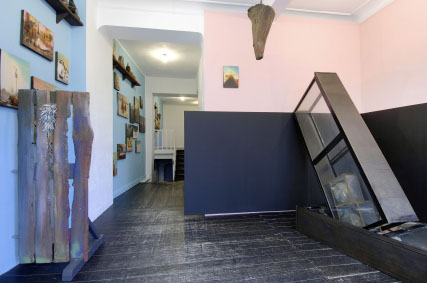 In his function as a "documentation - archaeologist" as Jörg Herold calls himself, he follows the mechanism of remembrance, securing, saving, investigation and research in his work progress. As a result of traveling into real and imagined memories emerge actions, films, installations, and drawings, which are holding the focus on cultural commemoration and historical cross-references.
On the basis of 30 motives, ethnographical as well as ethnological templates and historical documents like travel reports, Jörg Herold is questioning through a virtual created " land of accelerated folklore" the strange and unknown with a critical view of today. The installations, which arise out of that background, combine the media painting, sculpture and movie. Thereby the Petersburger Style of hanging the canvas in the gallery will be broken open by stalactites and a couple mountain ranges. The archaic appearing massif is presented on wooden brackets and shows amongst others the Ararat, Holy Mountain of the Armenians the disembarkment point of Noah's Ark.
In the front part of the exhibition, where his work "Vitrinensturz" is presented, Jörg Herold comments on the skull aesthetic of Johann Friedrich Blumenbach, a Professor in Göttingen/ Germany from the 19th century.Based on his favorite skull of a Georgian woman, Blumenbach assigned to the central-Europeans a preferred, high-class position.In the centre of the first room the sculpture "Stalins Rache" is suspended from the ceiling that inherits the name of one of the most notorious dictators in our history. The pasty work on canvas "Fadenhalter" hangs at the wall behind the sculpture and refers to the scripts of "Heimweh" by Jung Stilling. This publication came along with numerous German emigrants in the 18th century and describes the second future of Christi in Solyma in the Caucasus. In this comparison Jörg Herold refers to different forms of identity in a local and global context, aspect of violence and its consequence on nature and landscapes.
The centric mission in the work of a documentary archaeologist is to depict the possibilities of the memory for the future and to accentuate the conflict between aesthetic and ethic in presentation.The film "Steinmeiers Erben" that is installed in the second room of the exhibition thematizes the recent journeys of Walter Steinmeier, the foreign minister of Germany, that give him an official view of the situation in European peripheral regions. Therefore the film builds a bridge to the installation "Des Nachbars Zaun" that is placed at the left wall at the first room and which represents the boundary shift into the east.
Jörg Herold aspires as a witness to history to dilute conserved time for a short moment by using media installations, painting, sculpture and film. Travelogues cut in fine filaments float out of the fence, besides a whole that dismantles the texture of the wall and even the sequence of the works on canvas is fractured by the roughness of the piled up mountains. Therefore the recorded gets in motion and the installation becomes a liquid concentrate of memories for the documentary archaeologist on his journey to the country of speeded folklore.