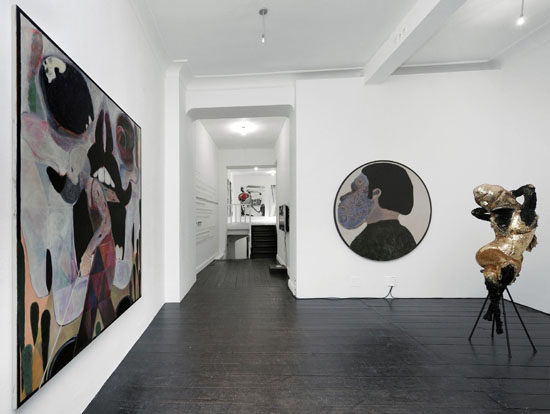 This year's summer exhibition LABOR at Galerie EIGEN + ART Berlin shows the work of five young international artist positions that are presented for the first time in a conjoint context at our gallery.

Katie Armstrong (born 1988 in New York) creates animated films out of drawings as an experiment in storytelling and a study of time and visual language of pop-culture in the digital age of the world-wide-web.

Birgit Dieker (born 1969 in Gescher) uses clothes as her artistic medium, which she sews layer by layer into anthropomorphic sculptures creating portraits of the former owner. The clothes as a „second skin" also symbolise the tension between inside and outside, private and public, to hide and to uncover.

Stephanie Kiwitt (born 1972 in Bonn) captures photographs at places of consumerism, such as supermarkets, boutiques or malls, detaching the objects from their former context by the means of isolation and alienation into an autonomous visual world.

Ryan Mosley (born 1980 in Chesterfield, UK) recites the classical traditions of art history in his both fantastical and historical paintings, while simultaneously probing the genres and practice of painting and playfully evoking the humour, terror and bafflement attendant on human existence.

Luise Schröder (born 1982 in Potsdam) works with video installations, examining constructions of remembrance and commemoration under the aspect of their medial presentation, political logic and promotionally effective usability.