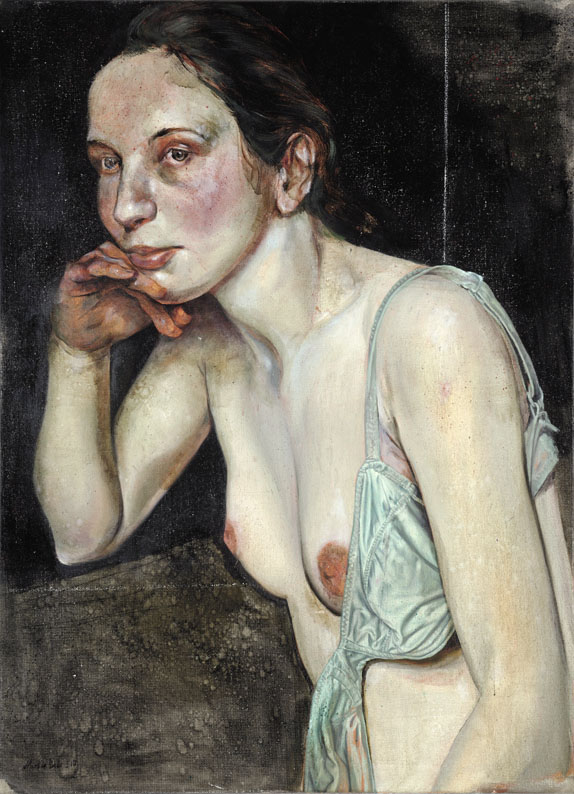 Entering Martin Eder's gallery of portraits, titled „Ugly.", one will find women squeezed in medieval raree shows, joined by duet of goat and pug. Just as in his photographic works, Martin Eder concentrates on the individual and conveys this process as an atmospheric compression in his painting. Unlike his earlier illustrative orchestration of sometimes numerous figures with small animals as playmates, there are now exclusively lone warriors candidly fighting for their constancy in the ascetic darkness.
The title fits the program perfectly, the portrayed are neither beauties nor cuties, but unsightly skin rashes and puzzled faces. A kinswoman of this cabinet of inadequacy is wrapped in a frock, holding a scythe that could just as well be a broomstick. Another, an unclothed half-lengthed figure reveals herself as an amazon, hidden under long hair. In the same time the pastose painted background doesn't leave the three-dimensional figures room to move. And so the hands through which masses of blood seem to be pulsating, suggest the physical destruction caused by the shortage of space. Waving about with a Dix-like gesture, a woman wearing a baby doll finally needs to squeeze into her claustrophobic dwelling with a fetal curl. All the intimacy embodied in the portraits' genre leaves only empathy as a last hope. At the same time one takes fright the women could lunge out of their oppressive dwellings. The shadow-figures' formless sitting becomes the expression of a melancholic introspection. Here arises the question whether the portrayed just woke up from an ominous dream of lust or a dull nightmare. In the end it stays unclear whether the gathering of the ladies' squad is underlined by "Everybody Hurts" of R.E.M. or a blaring Heavy Metal music.