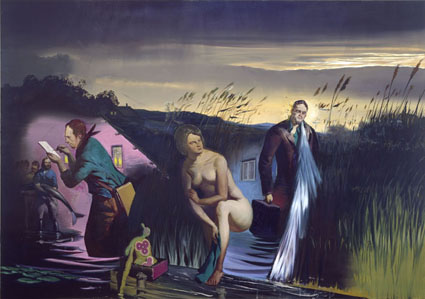 "...The draughtsman himself looks more like a membrane oozing pictures than a proud picture-maker. The dark fen lies at the edge of the consciousness and the past. where nature rubs shoulders with history, and water with land. A zone in which things have not yet subdivided, a minor chaos of creation on the periphery of cities, an echo of the great, world-generating chaos as told in Genesis. It's eerie, though. Who knows exactly what is going on in the reed fen? But that's not all. The fen is more than a metaphor, more than the artist's inner world, than mood and image. It really exists; it is a place in this world, on the outskirts of the city of Leipzig. You enter it through an iron door; beyond it is spacious and bright. It is Neo Rauch's studio."

(Wolfgang Büscher, Somewhere in the Reed Fen, in: Neo Rauch. Schilfland. Works on Paper, Munich 2009, p. 5. The catalogue „Schilfland" is published by Prestel along with the current solo exhibition. It gives a broad overview of the works on paper by Neo Rauch from the years 2005 - 2009 on 320 pages. The 160 images are accompanied by an essay by Wolfgang Büscher as well as an interview with the artist.)

Neo Rauch (born in 1960) graduated from the Hochschule für Grafik und Buchkunst Leipzig (Academy of Visual Arts Leipzig) with a degree as master student in 1990. Upon the awarding of the Leipziger Volkszeitung`s art prize, the Musem der bildenden Künste in Leipzig presented his work in a solo exhibition in 1997. The exhibition "Randgebiet" followed in 2000 at the Galerie für Zeitgenössiche Kunst in Leipzig, at the Haus der Kunst in Munich and at the Kunsthalle Zurich. His works on paper were first exhibited as an independent entity at the Albertina in Vienna in 2004.

The Kunstmuseum Wolfsburg presented the solo exhibition "Neo Rauch" with works from 1993 to 2006. The Metropolitan Museum of New York dedicated the first exhibition of a living, german artist in that institution to Neo Rauch and his works from 2007. The exhibition "Neo Rauch. Para" was also shown at the Rudolphinum in Prague and the Max-Ernst-Museum in Brühl.

In April 2010 an exhibition series will take place at the Museum für bildende Künste Leipzig, the Pinakothek der Moderne in Munich as well as the Nationalgallery Zacheta in Warsaw. The Museum für bildende Künste Leipzig and the Pinakothek der Moderne in Munich will show these solo exhibitions parallel. The selection of about 60 works of each show intends to give different views and links to the oeuvre of Neo Rauch. On the occasion of the exhibition series a catalogue with about 300 pages will be published at Hatje Cantz.