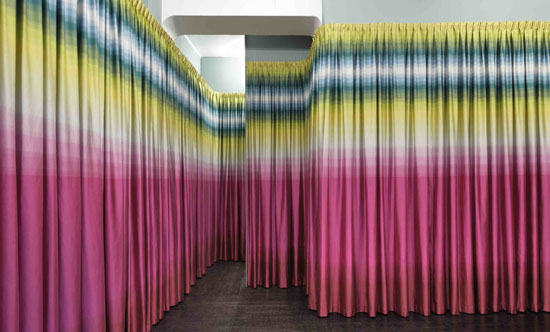 special events by Olaf Nicolai during the Gallery Weekend Berlin

Olaf Nicolai's work is conceptual in nature and often characterized by (socio)political references, in which multiple antipodal aspects (socialist and capitalist, hedonist and idealist) merge and overlap. Aspects such as production processes and the generation of commodities are reflected in his work as well as the realm of aesthetics and the role of the observer, i.e. participant.

In the exhibition WHY WOMEN LIKE TO BUY TEXTILES THAT FEEL NICE Galerie EIGEN + ART presents two works by Olaf Nicolai consisting of objects from a private interior at the same time arranged for representation: a curtain and two embroidered images.

In the front room of the gallery the visitor is received by the eponymous, multi-part installation WHY WOMEN LIKE TO BUY TEXTILES THAT FEEL NICE. A woven and coloured silk-curtain covers the grey-green walls of the gallery space. Its course is similar to those abstract mixtures which are created during the so-called Iris-print (a rainbow-like, iridescent transition of colour).
It seems like the curtain could be drawn closed, so that the room were to be entirely wrapped in one colourful piece of fabric. This establishes an element in the gallery room, which serves as a boundary and accommodation of an isolated room, whereas colour and the haptics of the woven material draw the attention of the observer.

The curtain's appeal is not only constituted by the fact that is a distinctive interior design object. It is rather conceived as an object that invokes different levels of reflection by its presentation, its materiality and appearance, as well as by the specifics of its production. In this sense it resembles a "rhetorical object": An object that - by means of its stylistics and the contexts of its production - is capable of providing information about itself and the network in which it is embedded.

This begins with the title. It quotes in loose translation a survey by Elias Smith from 1937 about consumer behaviour during the act of purchasing textiles. Smith's title could be read as a provocative description of the curtain. On the one hand it offers itself up as an object of verification of the statement, on the other hand this exact curtain could have been the historical object of these researches.

Elias Smith is a pseudonym which the sociologist Paul Lazarsfeld used after his emigration to the USA. His exemplary surveys are effective in market and opinion research to this day. Together with Marie Jahoda and Hans Zeisel he authored the first long-term study about the impact of unemployment in the 20th century: „Die Arbeitslosen von Marienthal". In Marienthal almost all employees became unemployed after the break down of the local weaving mills. The survey, which even today is a milestone in the development of empirical social research, was supported and financed by the "Arbeiterkammer Wien" (Workers' Chamber Vienna), in whose new building the piece WHY WOMEN LIKE TO BUY TEXTILES THAT FEEL NICE was first shown in 2010. The AK Wien's building is located today on the site of the former Palais Rothschild, where Adolf Eichmann installed the "Zentralstelle für jüdische Auswanderung" (Central office for Jewish emigration) after 1938. The economic-psychological research centre, established in 1930 by Lazarsfeld, Jahoda and Zeisel, is the role model for the the Achenbacher institute.

The publication WHY WOMEN LIKE TO BUY TEXTILES THAT FEEL NICE / Annotation, accompanies the curtain and is conceived as a textual system of references to this work in the form of an annotation apparatus with index of names and subjects. In the style of experimental literature the story creates in seven chapters a narration beyond linear logic. The study on "Die Arbeitslosen von Marienthal" serves here as the starting point to unravel a complex web of references spanning from the decline of the textile industry to sociological opinion research, the devel-opment of consumer desires and psychological studies on tactile perception of fabrics, creating an intricate textural web.

The walls' concealed colour in the entrée defines the upper gallery room as well. The mood of this second room is set by the sparse setting of two objects: The flower embroideries with the title FLOWERS, produced in a state company in Pyongyang. Olaf Nicolai visited this company during a study journey to North Korea in 2007. The embroideries show a white lily and an orchid, which not only fulfil decorative functions. Named after the North Korean dictator Kim II-sung, the blossom is cultivated on a massive scale. It is the representative emblem of the deceased president. Because of the identical, object-like framing of the "ideological" orchid and the "normal" lily, the ideological element behind the oscillation between decor and representation dissolves. An oscillation that also affects the objects' appeal and refers back to those rhetoric dimensions that also characterize the work WHY WOMEN LIKE TO BUY TEXTILES THAT FEEL NICE.

On the occasion of this exhibition an English version of the book WHY WOMEN LIKE TO BUY TEXTILES THAT FEEL NICE / Annotation is published in the series "THE WORLD ACCORDING TO:::", edited by THE OFFICE by argobooks Berlin (ISBN 978-3-942700-18-4).