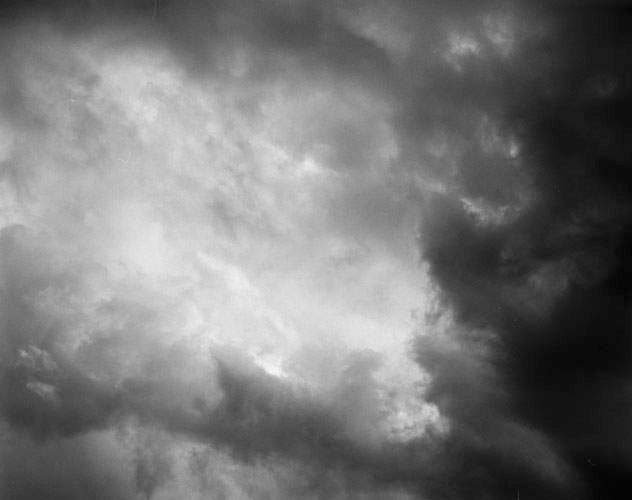 Continuing and enhancing her series "Baumstücke" Ricarda Roggan turns in her new works, combined in a three volume group of work entitled "natura nova", towards one of the most dignified subjects in fine arts - the landscape art.
Yet, already in case of superficial contemplation it becomes clear that such rash art-historical contextualisation does not help on: Considering the depiction of natural scenery in the traditional sense does not seems to be useful. More appropriate to understand these photographs is the reference to Alexander von Humboldt famous work "Ansichten der Natur".
In concentrating on one single physical phenomena - the formation of clouds, rocks and plants, which are extracted from their "natural", namely regional context, shows an evidently equally aesthetic as scientific (or more precisely: physical-philosophical) interest.
Central to all photographs is solely the respective object, which is presented in its peculiar state as organic structure and specific natural organisation. Aesthetic claims sustain the proto-scientific perspective going back to a time when the internal order of the nature was still intrinsically tied to the aesthetically external appearance.
During the course of the 19th century the description of nature changed due to rapid technical progress and the differentiation within the natural sciences (not least by the means of photography). Finally a strict separation of the scientific and aesthetic representation of nature took place, which leads to an anachronistic perception of Ricarda Roggans recent works.
Yet, this putative step backwards is more or less a regression trying to break through the well-functioning division of labour between natural sciences and art. This tacitly covenants to the selfish control of their objects by using it as meanings for their purposes.
Ricarda Roggan's art proceeds there, where science has once started, where humans were amazed about the natural variety of forms, than suddenly it was not perceived as natural anymore, but it needed to be structured in a system.
The initial astonishment about the way something looks, how it is procured and how it presents itself, can still be noticed in how the artist observes single objects. The motifs seem to be special and strange, and pervaded by a not estimable peculiarity - certain individuality - that avoids schematic typology.
However, the gaze is clouded by the experience and the knowledge that there will be no more an immediate "back to the things", there will be no innocent perception anymore, nor a little innocent "back to the nature".
Their damage in the age of sequential destruction is only seen from distance, nevertheless, it is present in every picture, just by the photographic-instrument set up of the motif, even an equivalent is set up by different (industrial, social, scientific) apparatuses.
Especially in regarding the clouds a refusal is expressed towards the romantic transfiguration of nature the transfiguration of nature decreases to the clouding of the sky. The fluid, but not lacking a strong order, formation of clouds reveals a view into the appearing light - quintessence of photography - this becomes visible only as ethereal veiling.
In the current sense of the term, natura nova is not "new"- new is probably reverting to an old concept. The term is not yet under the control, but seeks for order, which it owes to. (Falk Haberkorn)