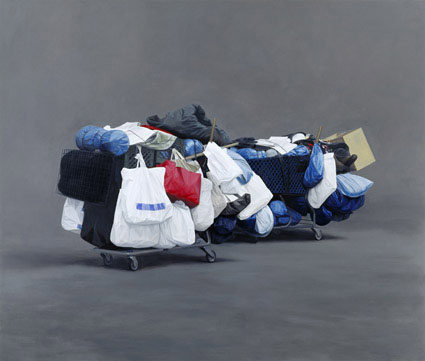 We are happy to present the first solo-exhibition by Tim Eitel at our Berlin dependence of Galerie EIGEN + ART. Tim Eitel started painting the works on display in New York and finished it in Berlin. The motifs are not linked to a certain place and are not mirroring a specific American reality, but rather are an interpretation of an urban civilization and existential state of society.

In a large scale one can see two shopping carts, loaded with bags: the belongings of a homeless person. No sign of the owner. Separated in large grey surfaces the carts appear like a compressed query, questioning our living - and viewing habits.Whereas a small sized painting is presenting the educational body language:A man in shorts is gesticulating in front of a stiffly standing boy in baggy pants. Here the gesture becomes an ambivalent symbol of hierarchical structures. The works are dark, mostly painted in grey, whose urban and common motifs from the no man's land of public places are presented like on stage. Known objects seem to be concentrated to existential statements, figures emerge from the dark and define the space through little interaction.The images are refusing narrative interpretation; the focus on details is explicitly used against narrative moments. In fact Tim Eitel is placing emphasis on the figurative, in his work the linguistic story is subordinate to associative thinking. Through consolidation of precision and ambiguity in painting, Tim Eitel is searching an exit from the day-to-day plethora of images. He ties up to the idea of a collective archive of images that the individual memory is using, with plenty of possible references.