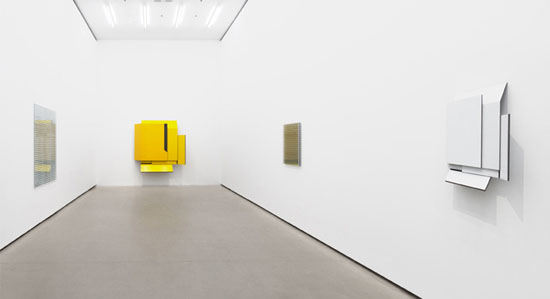 Traditionally, Minimalism seeks to evoke emptiness and a lack of content, to relax the viewer's gaze, and to produce a "total identity as object", as the American art theoretician Rosalind Krauss once put it. Without opening himself up to the discourse rhetoric that accompanies today's debates about the Minimalist legacy, Carsten Sievers playfully inscribes himself in this tradition with his works. But at the same time, he charges his works with an auratic depth that works in the opposite direction. Sievers' oeuvre is based on the artistic activities of folding, layering, and cutting and on the idea of an opulent seriality that carries the Minimalist aesthetic forward and simultaneously locates it in real life.

The exhibition "STUTZEN" brings together pieces from two new work groups. These works trigger thoughts about the title word's double meaning in German: to be suddenly consternated and to trim. The objects in the first work group consist of used Aludibond sheets that once served as advertising boards on Swiss streets. The viewer sees only the yellow reverse sides of the erstwhile advertising media, which an adhesive foil protected from wind and weather. In an elaborate process, Sievers mounts ten layers of the material. The resulting sheets are then layered over each other once again and "folded" to create dense sculptural objects, whose surfaces gleam in the light of the exhibition room. When the viewer looks closer, however, these objects destroy the impression of a perfect surface, that Minimalist fetish; instead, they radiate a powerful vibrancy. The silver-gleaming mountings of the objects strikingly attract attention, and the surface displays initially hardly perceptible scratches, dents, and traces of use. 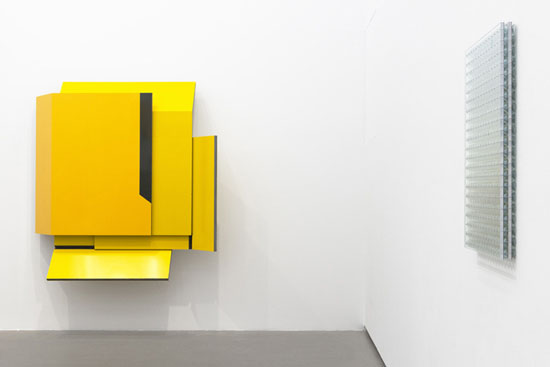 For the pieces in the second work group, Sievers uses Plexiglas, suction cups, and iron wire. Like the Aludibond objects, they radiate a great elegance that seems to contradict the used material. In the largest piece in this work group, Sievers drilled holes to mount several hundred suction cups behind two vertical-format sheets of Plexiglas. The suction cups do not hold on the wall, so the wire, bent into serial forms, serves as the means of mounting. The wire vaguely recalls a script, an aesthetic phenomenon to which the artist frequently returns in his oeuvre. The prototypes of the suction cup objects served Sievers to cover up touchscreens in urban life and to make it impossible to use them. The strong adhesive power of the suction cups on the smooth monitor surfaces ensures that they cannot be removed again. In a particular moment of frustration, the viewer can see through the transparent Plexiglas what is happening on the touchscreen.

Both the Aludibond and the suction cup objects are continuations of conceptual production practices that Sievers has delved into for a long time. What appears most prominent among them is the "folding", which the artist understands as a "cosmological model" and which is conspicuous in these work groups primarily in the sense of "assemblage" and "collage". 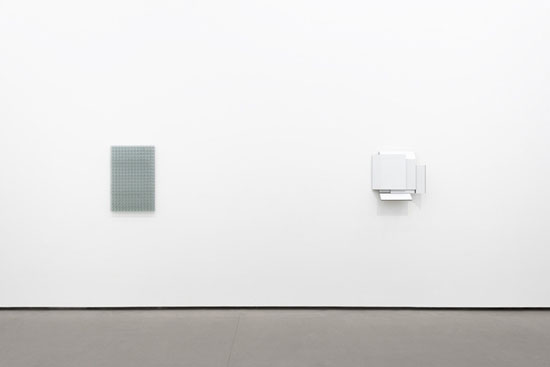 Carsten Sievers thereby takes up the Minimalist aesthetic as a matter of course. His objects recall the legacy of Frank Stella, Brice Marden, Donald Judd, and Eva Hesse and, without directly referring to this legacy, play with the fact that it has already powerfully entered our visual subconscious. The works are not homages, quotations, or satires. Instead, they exude an unusual spirit of irreverence and freedom.