vert, the title of the current exhibition, does not arise from the field of the artistic-imaginary as a reference to green, alluding to the landscape, the subject David Schnell favors along with the interior. No, “vert”, is a quite profane expression from the field of extreme sports: it designates the challenging variants of, for example, skateboard and BMX sports on the semicircular ramps called half-pipes. Speed, daring, movements – associations that can be connected with “vert”, but which do not necessarily arise in connection with painting, a rather slow medium that usually demands calm and contemplation from both the producer and the recipient. And yet it is a very fitting term for this exhibition, because “vert” not only stands for a BMX discipline that the artist, too, has devoted himself to in recent years; as an English abbreviation of “vertical”, it also points to one of the structural characteristics of this painter from Leipzig: as different as the motifs and formats of his paintings may be, including in earlier works, they very often share a powerful structural and formal tendency to vertical orientation, a lofty range that sometimes seems to unite the earthly and the heavenly and that refers to one of the constant principles of construction in his painting. 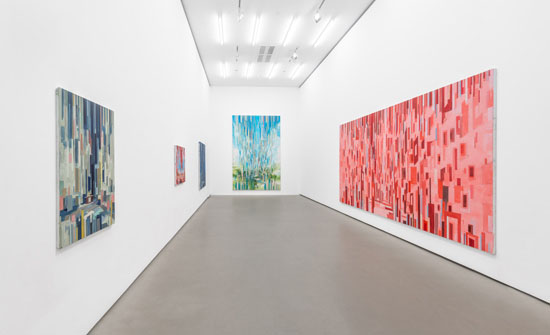 Despite all the serenity and balance of its composition, often produced by a strong one-point perspective, David Schnell’s painting creates the feeling of being drawn into the picture. The viewers stand as if on a ramp in front of Schnell’s paintings, imaginarily just about to plunge into the picture. For example, the large-format landscape painting characterized by blue and green tones, Downtown, opens up like a window onto a dynamized pictorial space. The far-seeing perspective and the staggered placement of vertical color fields tapering toward the back sweep the viewers along in a nosedive toward the horizon placed near the middle. Here, “vert” could also stand for “vertigo”; if one looks for a while at this landscape, it can overwhelm one with dizziness. The colors of the geometric forms condense toward the top and bottom; the interplay between abstracted-controlled “stalagmites” and “stalactites” dominates the middle part of the picture, creating a powerful effect of distance. On a closer look, the inkling of a landscape appears behind the abstraction, without being concretely definable and palpable – perhaps more an idea of landscape, pervaded by splotches of color, drops, and melting colors. A hint of organic forms, placed as if randomly. They want to resist the clear contours of the pixel-like color fields with their artificially asserted naturalness.

Drives through a culturally shaped landscape belong to David Schnell’s inspirations as much as early computer games with poorly resolved graphics. Each landscape is construct and culture, is work on nature. Seldom is its core so clearly grasped as by David Schnell. His painting seems to carry out a weighing between imitating construed naturalness, on the one hand, and the rational and rule-like composition of pixel-like abstraction, on the other. He builds his landscape pictures with tectonically placed surfaces, thereby recalling the beginning of modern landscape pictures with Paul Cézanne, who put together his views of southern French landscapes from reduced forms and color fields. 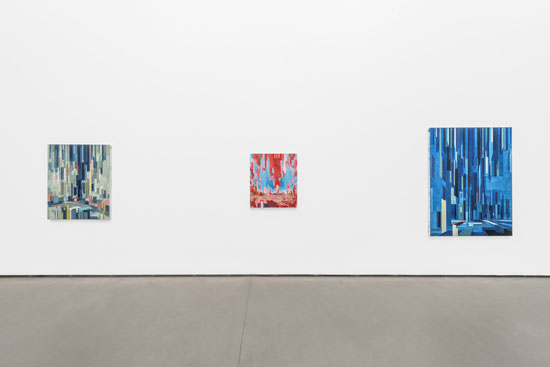 David Schnell works in parallel on more than one canvas, lets them stand for a while, and later continues his work again, sometimes changing them and confronting the original artistic problem in a new way. The paintings, however, are never battles of material. The artist applies his paints in washes, so that the bright canvas or older paint layers shimmer through from the back, lending the paintings an indwelling luminosity. The paints are not layered higher and higher, but remain primarily surface and color; sometimes they seem almost immaterial. Here, too, associations with older artists from art history are aroused, for example, when one is reminded of the cityscapes and interiors of Lyonel Feininger, whose crystalline-seeming color surfaces, also applied in washes, give the picture an inherent radiance, as if they were painted with light.

As a consequence of his stay as a Fellow of the Villa Massimo in Rome in 2013, David Schnell began painting the interiors of churches. They testify to his delving into the presentation techniques of Baroque architecture, the illusionistic play of forms and light in the room as stage. In three pictures in this exhibition, too, he again takes up the thematic complex of sacred interiors. In three different scales of color, once painted with gray dominating, once with blue, and once with red tones, Schnell turns to the more intimate interior views, in contrast to the broad landscape pictures. Narrative reference to an object plays no role here. The distant recognizability of a room, the church room, serves more as an entry to the picture, as an anchor offering a hold and orientation on the eyes’ path through the cascades of color. Devoid of human figures, like all of his pictures, in these Schnell concentrates completely on the illusion of space and the perspectival staggering of various color fields. The smaller formats convey concentrated intimacy, while the large-format pictures seem almost monumental, as if they wanted to encompass the viewer. The countless repetitions of the surfaces make the space seem endless; in cubistic reminiscence, he radically reduces the church furnishings and architecture, systematizing them to basic forms, visually deconstructing them, setting vanishing points and perspectives, and repeating fragments. The vertical course of the color fields also conveys the impression that they are turning away from earthliness. An encouragement to contemplation? 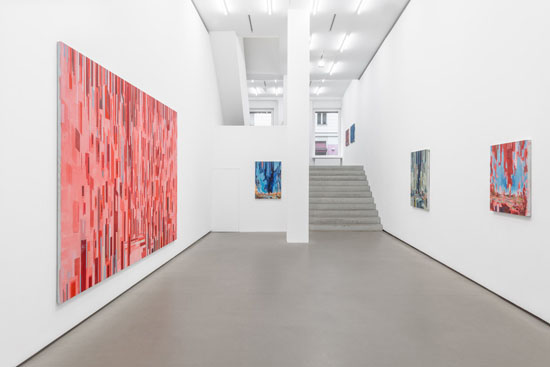 With their light effects, the impression of translucid reflections, and abstracted forms, David Schnell’s paintings are distantly reminiscent of stained glass art. Working with glass pictures is not unfamiliar to him: for example, he designed the “Friedensfenster” for Leipzig’s St. Thomas’s Church in 2009 and is currently designing new glass windows for Cologne’s Christ’s Church. But his pictures are not really an expression of religious worship; he consciously eschews all narration. His painting conveys belief in the power of color and light; it is concentrated art that, in contrast to the athletic meaning of the title vert, demands calm and possibly attentiveness. And another point in the work of the Leipzig painter may be recognized therein, namely, that systematics set at the beginning are left behind and turned into their opposite: where the title promises velocity, the painting can convince with its deliberation. 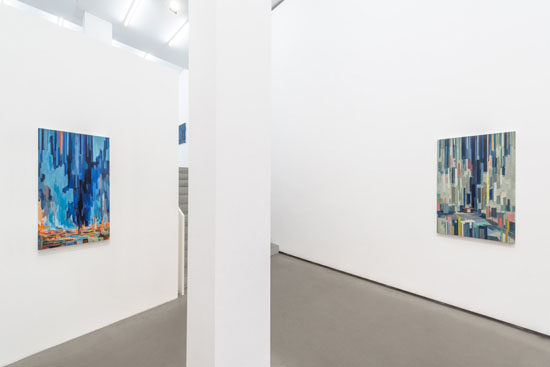