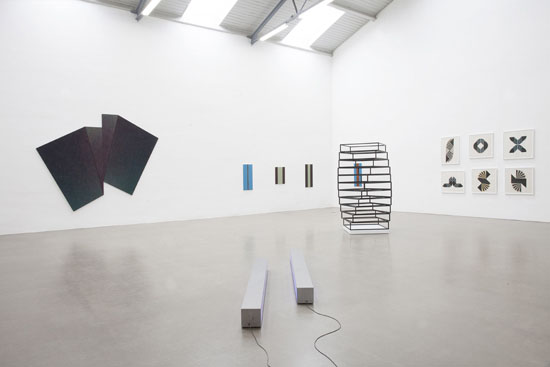 The spiritual catalyst for this exhibition of three artists is Karl-Heinz Adler (*1927). However, it was not the man himself who personally initiated it; instead, it was his strikingly compelling oeuvre. He has been exercising an increasingly magnetic influence on a younger generation of artists, including Kai Schiemenz (*1966) and Philip Seibel (*1980). The reasons for this fascination are multifaceted and have to do with the reinvigorated interest in concrete art and its conceptual tactics. But not only that: it is certainly not merely questions regarding current trends or art-historical classification that have deservedly renewed our appreciation of Adler. It is nothing less than the exemplary consistency of an artist and man's life that has found expression in three different systems and which draws its single-mindedness out of this biographical wealth. Hence it is also a role model, so impressively played by Adler, that radiates out to touch young artists. 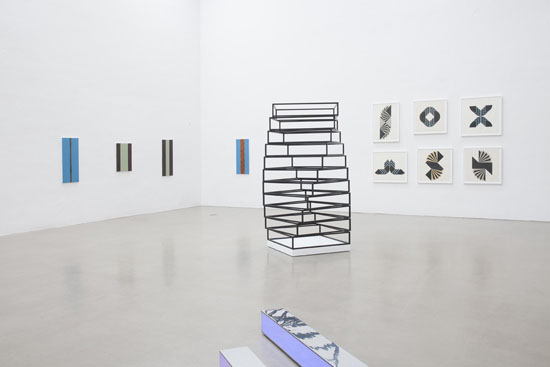 In addition, one has to know that various forms of social opposition to a certain kind of artistic practice prevailed during Adler's maturity as an artist. Just when the young man, who had studied at the art academy in Dresden, set out on his creative path, an extensive demonization of geometric abstraction, of concrete and constructivist art, broke out in East Germany that was linked to the image of so-called formalism as the enemy, and this alone seemed to discourage many of his contemporaries. Hence it required enormous resistance to pursue the path of nonrepresentational expression. He himself says today: "Conformation and blind obedience are things that an artist is not familiar with. He has to doubt and to examine." We can construe Adler's early willpower and resilience from his fanned out layerings of paper from the late fifties—highly unusual for the context of the time, and almost outrageous. Furthermore, his "serial lineaments," which he began producing in the mid-sixties, seem visionary—even from today's perspective—as they preempt the dynamics of binary renderings far before the digital age. 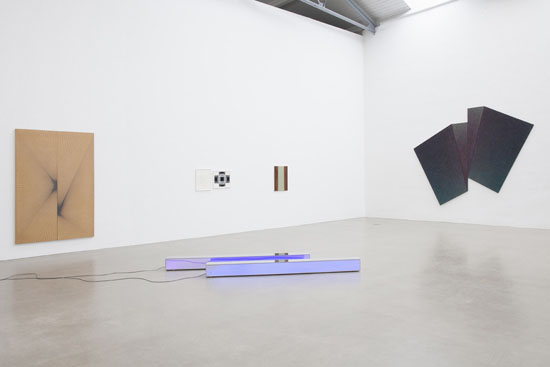 There are a variety of intersections between Adler's oeuvre and the creative work of Kai Schiemenz and Philip Seibel, alone in their radical nonrepresentationalism. In this respect, the elective affinity cited here is already self-explanatory. Yet without infringing on the independence of Adler's two younger fellow artists, those intersections may be briefly traced in the context of this exhibition. Hence if we look at Seibel's works with aluminum composite panels as supports and his programmatic representation or staging of wood veneer alongside sharp-edged lacquer monochromes, then we see a strong orientation toward extra-artistic themes; themes that have to do with building practice, craftsmanship, and industrial references. This is naturally reminiscent of Adler's preferred pressboard surfaces and his use of industrial paints. We also find the urge to eliminate traces of the "handmade" as far as possible and to rehone our sensitivity for the enormous potential of painting, of the manual production of pictures, in this rational coolness. This flawless close vision turns viewing his work into an almost meditative pleasure. Thus the texture of wood, often rendered as a meticulous trompe l'oeil, becomes a further trademark of these panels. Seibel's initial training as a guitarmaker surely resonates in these sensitive, illusionist material analyses. Adler, on the other hand, who was born in the Vogtland, stems from a family of instrument builders; beginning in early childhood, he, too, came to know the artisan accuracy required for producing a functional object. In the case of the musical instrument in particular, the aesthetics of its appearance is simultaneously one of the materials out of which it made. Both artists redefine the panel painting of the twentieth and twenty-first centuries with all of the resources of an environment shaped by modernism and postmodernism, by industry and norms.

Adler's interest in materials such as concrete, glass, and metal was fostered within a building context: his longstanding teaching activity in the department of architecture at the Technische Universität Dresden. He successfully experimented with ceramic and cast stone technologies, and alongside molded bricks for building purposes he also developed his modular approach in the area of art. In doing so, he rigorously (and with references to Bauhaus thought) demonstrated the synthesis between a building practice that catered to both function and artistic design. To this day, he also continues to produce autonomous, constructive formal derivations from glass or metal. Their independent ornamentality and materiality serve as a source of inspiration for Kai Schiemenz, who in recent years has increasingly worked with glass and metal as well. He is currently forming plastic base elements in the fashion of classic sculpture, and has the plaster negatives taken from them cast in a Bohemian glass factory, which yields fascinating references to industrial, building-related manufacturing methods. In fact, the resulting works call to mind bold early modern architectural models based on utopian ideas. This is hardly surprising, as architectural and even applied aspects have long defined the artist's work. We need only recall his participative spatial works such as Tower to Nowhere (2008) or Geschrumpftes Theater (Shrunken Theater, 2007), which were always constructed with user participation in mind. Today, Schiemenz produces more and more autonomous objects for space and walls, which we can read as statements about materiality and surface. He reinterprets entrenched stereotypes of these materials with the aid of mirrors, subtle light, colored glass, or polished metal: glass has the appearance of soft wax, or a semitransparent mirror overlays the expected reflection with a shimmer of light. Much like Adler's almost lyrical colored layers from the nineties, poetic and magical effects become visible in Schiemenz's newest glass objects. And this although these, as is also the case for the former, are directed by constructive deliberation.

Yet what did Karl-Heinz Adler write in 2011 after commenting on the rigor of his principles and their ornamental regularities? "The transparency of my methods—at least I hope so—do not derogate from the secret and the affective." That reads like an argument for secrecy as an inexplicable element of successful art beyond conceptual objectives. It can be effortlessly applied to the impression made by all three of the groups of works being presented here. 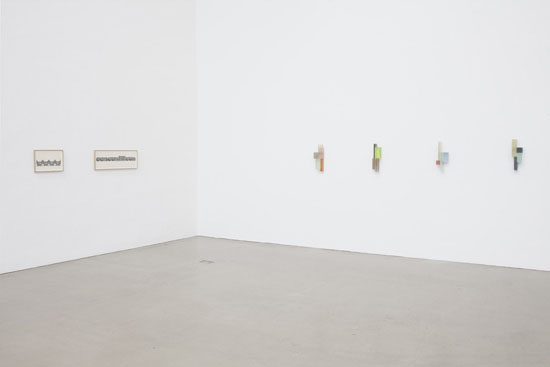