It was probably only a matter of time before Kai Schiemenz, who trained as a stonemason, found his way back to stone – at least in the motto of his exhibition “STONES”. But he doesn’t fulfill this verbal promise “one to one”. You’ll seek in vain for hewn blocks here. But let’s look back briefly at Schiemenz’s large and small form composites of multicolored Styrofoam (2015/16). Didn’t they, too, always circle around the problematic of stone masonry? These rapid, almost sketchy constructions, steles, and pillars seem like playful replicas of the traditional slowness of working in stone, of its dignified gesture, and of irreversible decisions about form. Nothing about them is set in stone. In this way, the Styrofoam objects nonchalantly undermine the authority of stone in art and architecture. 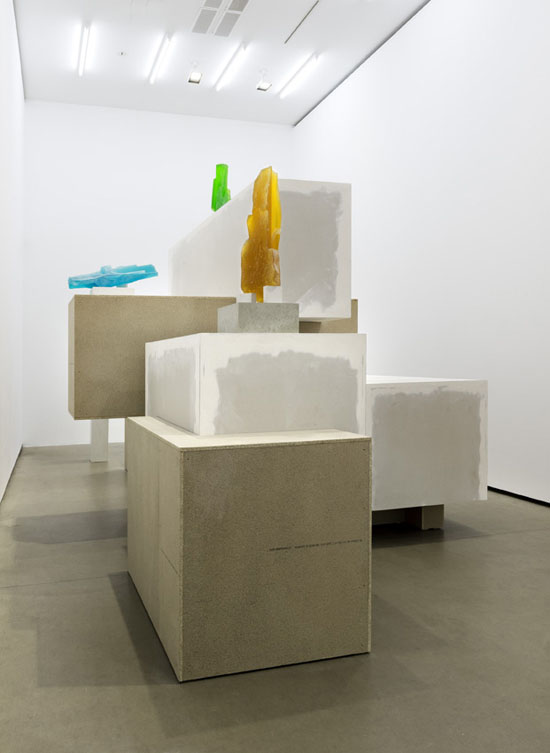 But forward into the present: to the degree that Schiemenz not only presented such light objects autonomously, but also used them as molds for his newer cast glass objects – as transitional bodies, so to speak – he must have thought as much about stone as the trigger of. I deliberately write “trigger”, because we still do not see any stone sculptures in the current presentation, but a variety of other materials: ceramics, aluminum, wood, and glass, of course. Primarily opaque glass bodies in different colors. In its material compactness, glass comes recognizably closest to stone. And that’s not all: these are cast-glass replicas of artistically processed stones. The translation of the form from one substance to the other, alone, testifies to an achievement, demanding in terms of design as well as technique, as well as to pleasure in craftsmanship. But equally fascinating is the intellectual dimension of this decision, because the material, stone, however it is given shape, usually stands at the end of a creative process: after drawing and a clay or plaster model. But in Schiemenz’s current works, the stone, too, is a transitional body and not the concluding artistic statement.

This mental game with transformation undoubtedly began during Kai Schiemenz’s many years working in the glass workshop of Zdeněk Lhotský in Bohemia. Doesn’t the production of an artificial solid material of silicate and minerals repeat geological-historical processes in miniature? The encounter of substances whose metamorphosis through extreme heat and then cooling leads, in nature, to forms that can never be fully calculated. The analogical craftsmanship or industrial processing in glassmaking uses these chemical and physical reactions in a controlled way, but, especially with colored glass, a certain alchemical mystery nonetheless remains. Traditional recipes of the glassworks and glassmakers’ old experimental knowledge play a role. Liquefaction, the admixture of coloring metals or trace elements, the temperature, and the hardening do not necessarily lead to the desired results; this creative uncertainty always thrills Kai Schiemenz. 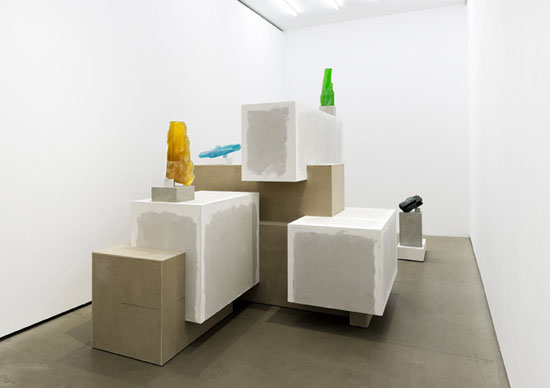 And here, too, the physically absent stone transcends its function as mere casting form, because Kai Schiemenz uses basalt that he found in a quarry in the Lusatia region. Like a classic sculptor, he drew geometrical forms out of these boulders. These cubes grow as if organically out of the basalt, and sometimes they interlock. Incompletely formulated, they sacrifice a possible perfection to the primal rawness of the stone. Basalt in particular is an astonishing natural form whose serial symmetry and formations that seem as if designed have long inspired artists and landscape architects. For example, in his Wörlitzer Park, Prince Leopold III of Anhalt-Dessau not only erected an artificial volcano, but also a veritable platform of basalt from Saxony at its feet. This served as both an aesthetic example of artful creation and as a natural-scientific specimen. By being set up beside the miniature Vesuvius, this installation includes a statement, a taking of sides in the 19th-century’s learned controversy between the Neptunist and the Plutonist School. Adherents of the latter were (rightly) convinced that this wondrous stone was not, as their adversaries claimed, oceanic sedimentary stone, but rather abruptly cooled magma. This “basalt controversy” was only partly about proving who was geologically right; it was also about nothing less than the origin of the world – whether from the sea or from fire. So, basalt not only has an inspiring form symmetry, but also a cultural-historical dimension. Schiemenz’s choice of hard basalt and glass technology thus functions as a symbolic reference to its emergence from fluid. In addition, the artist arranges the objects in a landscape of pedestals. And after we have descended into it, we may feel a little as if we were in an (abstract) grotto. For this situation, Schiemenz skillfully uses the quasi-underground structure of the gallery space as a setting and associational signpost pointing into the interior of the earth. 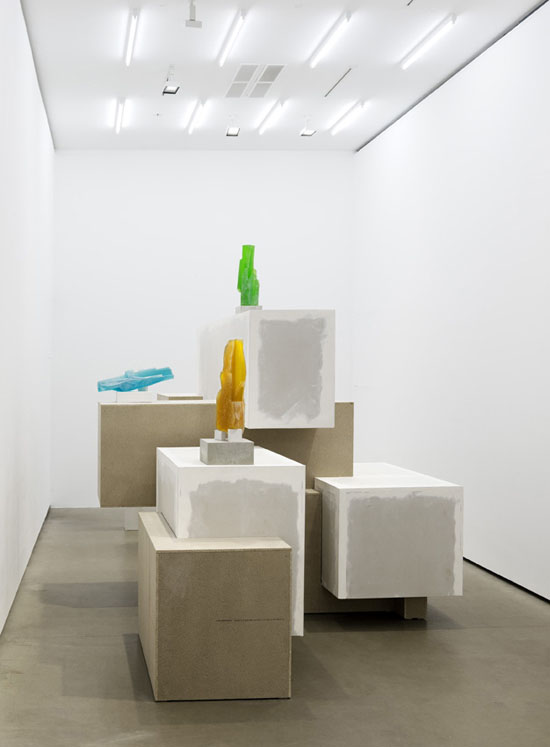 Along with the aforementioned protagonists – invisible stone and visible glass – the exhibition “STONES” offers further surprising material summersaults. The textured aluminum plaques, for example, are also cast “translations” of wooden panels coarsely trowelled with structure paste. Kai Schiemenz calls them “technically produced pictures in which the artistic act initially appears extremely reduced”. The ensuing casting in a shimmering material offsets this impression, of course, especially because more sensations occur on the surface. Schiemenz lays colored geometries over it; their matte finish seems oddly familiar. Right: we know this finish from everyday life, from banal objects with would-be glamour: ice cream tubs, siphons, flashlights, ballpoint pens… anodized (electrolytically oxidized) aluminum) is the magic formula with which Schiemenz stages his reading of Pop Art. He does not carry out his ennobling of the profane by holding consumer goods ichnographically aloft, but by using this technology that is seldom associated with art. He thereby remains true to himself as a keen-witted border crosser, because his appropriation of glass and ceramics successfully challenges the trivializing typecasting of such products as arts-and-crafts. No wonder: Kai Schiemenz’s passion is initially for the material processes and as yet unattempted metamorphoses – i.e., the respective process itself – and only afterward for the possible result. A true alchemist gains entry through the back door.