Kristina Schuldt's artworks are large-format, colorful, dynamic, and powerful. As in a picture puzzle, seeming contradictions are brought together: figures find themselves equally fighting and playing, dominating or being dominated, and having male as well as female traits. Models from art history collide with the motifs and aesthetics of the digital world. In Schuldt's paintings, human experiences and feeling are given a form in which conflicts are waged that metaphorically go far beyond them. Some questions to the artist:

Why do you paint?
I'd like to have an answer to that myself!

Have you ever considered another medium aside from painting?
I have created installations. My grandfather was a sculptor, so I also plan to venture into sculpture some time. I feel a desire to implement my forms in 3D. But its difficult to transpose something this fragmented into space.

How do your pictures develop? Do you make sketches?
No, there are no sketches. And it's clear that the first thing I paint in a picture will not remain there. That's also what I like about painting. I trust that what will be seen in the picture is predetermined.

What's the first thing you paint in a picture?
Sometimes I just paint diamond shapes. Or circles.

What do you consider unique about painting?
What I love about painting is the interplay among chance events, that I am really the sole creator, and the working process. The reason I paint in such large formats is that it gives me the feeling of being overwhelmed and challenged. My picture then becomes an opponent who can really destroy me.

Right now, you are painting the picture "Muse". How did it challenge you?
When I paint, I struggle with the picture. Because you can never process the entire picture, you can only ever attack, come right up to the picture and paint a section, then you take your distance again, and the picture fights back. So, it's a constant back and forth.
In the picture "Muse", the fight becomes a motif. It's about painting. The painter is overwhelmed by his muse. But maybe it is only an intoxication, and he merely imagined he is under attack.

How personal are your artworks?
Very personal. The motifs have a lot to do with me. What they are about is usually happening at the same time. For example, with the picture "Muse", it's also about not getting around to painting, that something always interrupts, that you're always hindered. But I try to translate my experience into a picture that also stands for philosophical or societal problems that exist in wider contexts. And not just in everyday life in my studio.

So here the relationship between muse and artist is applied to the minor, everyday difficulties in painting? But instead of painting a female painter and a male muse, you have remained true to the classical gender relations. Do you have a reason for this?
My figures don't actually have such an unambiguous gender. It could be a male painter, but it could also be me. But the figures could also be thoughts; they don't have to be people.

There is almost never a completed figure in your oeuvre; they are still in the process of developing toward something, of changing. Body parts are scattered, doubled, and strive away from each other and then back toward each other.
That's something I like to do. I like it when you don't know which leg belongs to which figure.

Many of your female figures wear short pleated skirts. Are you thinking of a tennis skirt or of a schoolgirl's skirt?
It could be both. I also paint flowers like these skirts. Of course, the skirts stand for something female, for something playful, for something youthful. Because my figures are not grown up. Everything is still unclear; they are in a phase in which they can clown around without having to take responsibility for it. That's why they are unwise and immature. They stand for unripened thoughts.

The picture one sees as a fight – is it also really a game?
Exactly. It can be a love scene and a fight scene at the same time.

Your titles are always very precise. Many artists give their pictures titles that make them seem more ambiguous than they are, sometimes even turning the pictures into riddles. But your titles give the pictures a new pithiness and manifestness. One understands the pictures better because of them. How important are titles for your works?
A French painter once said that the title of a picture is like an additional color. The title is tremendously important, because it lets the viewer think outside the box.

You mostly work with large formats. What then appeals to you about small formats?
I don't take the smaller pictures as seriously. But then they usually develop into nasty little pains in the neck. Because everything goes so quickly, too quickly. That makes it so difficult to paint small pictures. You have less time to think about them. In contrast, when you paint larger surfaces and step back from them repeatedly, you more time. The pictures then become more complex. But little pictures are suitable for trying out something new.

Do you sometimes paint over a finished picture?
I seldom term a picture "finished". The longer they stand there, the greater is my impetus to paint over them. 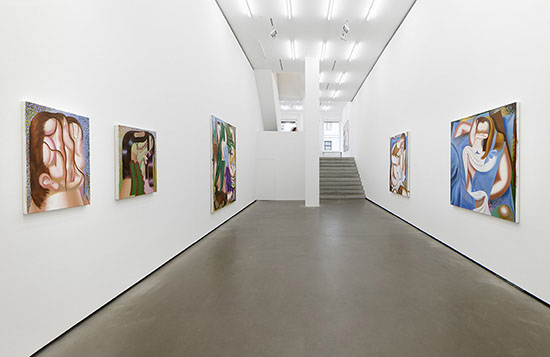 In your pictures, I see many aesthetic references to modern art, especially to Cubism. How would you characterize your relationship to modern art?
For me, modern art is a zero hour; everything else took place either before or after it. As a young person, I was interested solely in modern art; I didn't take anything else seriously at all. My greatest role model was and is naturally Fernand Léger; I can't deny it. I seem to have internalized that somehow, because usually I only see afterward that there was an influence.

Modern art has found its place in all the world's great museums. You can buy it as a poster or small-format print or pin it on your refrigerator door as a magnet – and this produces a certain surfeit. Is one of your aims to cast a fresh gaze at, for example, a Cubist aesthetic?
I simply try to find a form for things that play out inside me. And if it fits, then it fits. I simply try things out. I don't want to control anything.

Does your art aim to disturb the viewer, confuse him, provoke him – or please him?
While I'm painting, I block out any thought that the artworks could be seen sometime. Of course, I'm pleased when the pictures move out into the world and change people's lives. But that's not my goal. For me, each painting is a game that ends at some point, and then I begin a new one. It may be somewhat disrespectful or ignorant, but the viewer really doesn't interest me.

Part of why I ask that question is that today, especially in the social media, one is exposed to a viewer much more and in almost all areas of life. A viewer who definitely also appraises by clicking "like" or leaving comments. You yourself are on Instagram – in your studio, doesn't that make it harder to block out the viewer?
Yes, it does. Today, there is always someone looking over your shoulder. And I try to incorporate this feeling in the pictures, as well, as a bluish light signaling that you're being watched – like we know from computers or smartphones.

In many cases, the smartphone or other effects from digital culture, like pixelations or loading bars, find entry to your work. What do you hope for from the confrontation between these pop-cultural motifs and the aesthetic of modern art?
Around 2014, I began creating something like a collection of props on paper. I store it quite chaotically on the floor of my studio. It includes not only various shoes, heads, hands, and books, but also smartphones. I like it when there is a collision between these objects from differing realms.

How humorous are your artworks?
I can see something funny in everything. That's why my artworks are definitely also humorous. It always becomes funny when you view a thing from different sides but you are not more deeply involved.

How political is your art?
Not at all.

What aspect of your work is intuitive, and what is conceptual?
My work is very intuitive. Of course, there is this special body form that repeatedly appears – but I don't really like it at all. I'm always fighting against it and looking for new forms.

So, you don't like your own trademark?
I guess you can't always defend yourself against everything.

When was the last time you succeeded in capturing a new form?
Last year, I began incorporating rectangular forms, because I was looking for an expression of masculinity, even if that sounds a bit heavy-handed now.

Your figures are very dominant; their powerful form expresses strength. At the same time, they are dominated, sometimes downright cramped by the pictorial space. Are you interested in this tension between domination and being dominated?
The point is always both at the same time. That's how life is, after all: within boundaries, again and again, you try to rebel.

Bodies decay and run off the rails, but at the same time strive toward each other, thereby resulting in a new form.
That's how one sometimes feels. Ripped to shreds – and then you have to find yourself again and put yourself back together.

There are building stones in many of your pictures: they seem colorful and gleeful; sometimes figures dance on them. What kind of stones are they?
The brick stands for stability. Houses are built of them. Cobblestones form streets. When figures march over loose stones, it means that everything is in ruins. I sometimes also used bricks as symbols of iPhones.
Along with bricks, pillars and legs also stand for stability in my pictures. But they are always threatened with becoming unstable.

Are your pictures more direct or indirect?
Directness is important to me. For me, direct means sticking completely to the theme. That I'm serious about what I create. 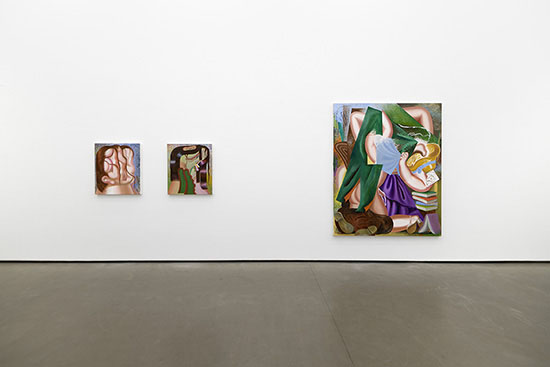