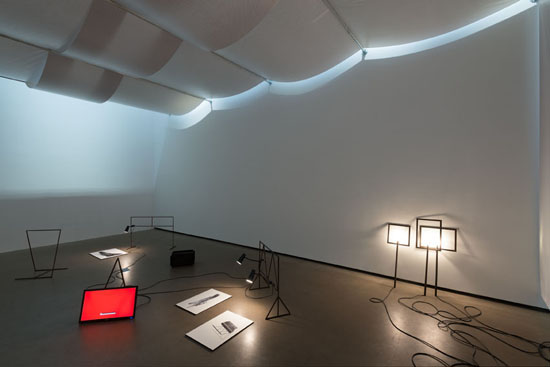 In her current exhibition Die Musik bricht ab. Die Gäste sind verlegen. Pause. that takes place from January 14 throughout February 6, 2016 at Galerie EIGEN+ ART Berlin, Lada Nakonechna follows her interest in the relations between the artist and the viewer and, referring to Brecht's epic theatre that was supposed to actuate social and political changes, arranges the space as a theatre set up. It consists of separate objects that are constructed from elements from the real and the digital world and from traces of the public sphere: everyday life attitudes, war and media manipulation.

By entering the gallery, the visitor is invited to switch between the position of the spectator and the actor and it seems that the artworks - metal objects, edited photographs, video and costume - are playing the role of props in a play we do not know and unexpectedly become part of. It is not sure if the act just ended or just started, if there already happened something or we are still waiting for. There is a pause. The particular state of silence, weightlessness, loss of reference points, something in between. 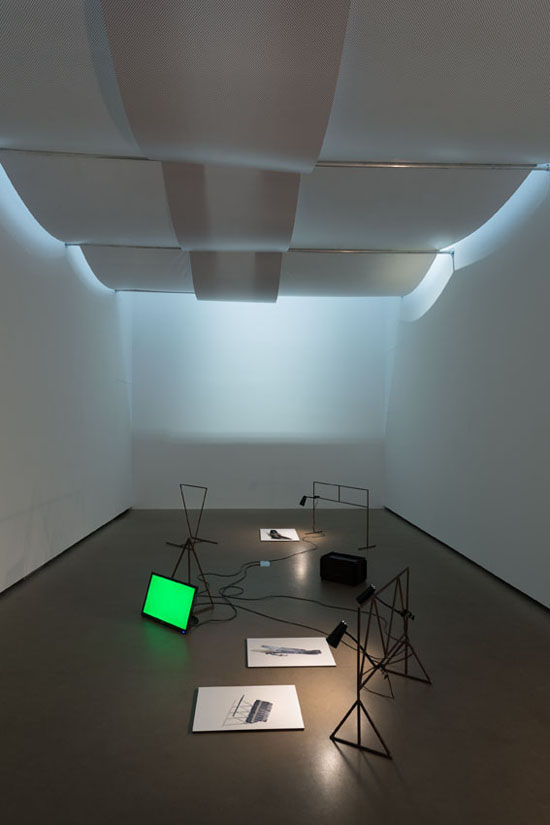 The Ukrainian artist Lada Nakonechna is mainly working with drawing techniques using pencil as well as in the fields of video art, performance and installation. In her works she is dealing with the social impacts of political transformation in categories like memory, history, identity and society.

As an artist who lives in Ukraine but often works and exhibits within the European Union, crossing boundaries and migrating are part of her own biography and identity and also plays an important role in her work. 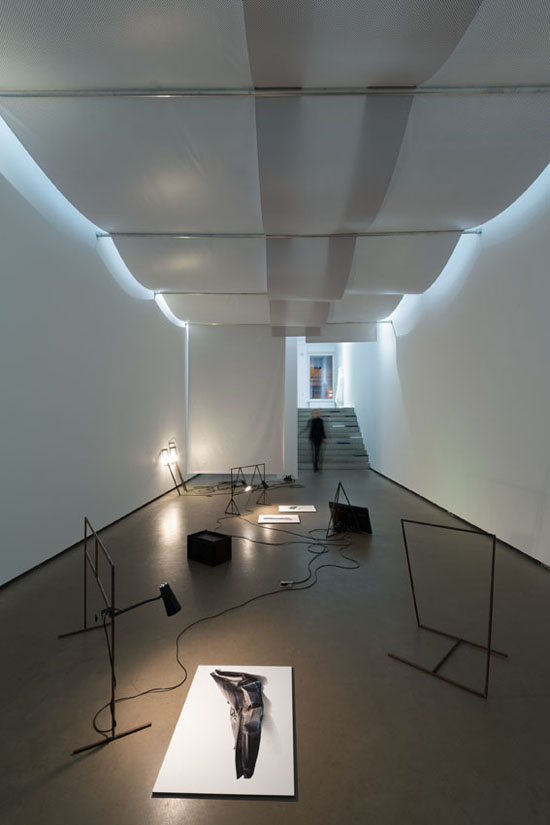 Lada Nakonechna (*1981) studied at the National Academy of Fine Art and Architecture in Kyiv. She is a member of the artists group Revolutionary Experimental Space R.E.P. (Revolutionary Experimental Space) and a cofounder of Hudrada, a self-organized community based on interdisciplinary cooperation. In 2012 Lada Nakonechna conceptualized and cofounded the Course of Contemporary Art – an independent educational and research program for emerging artists. Her works are presented national and international in solo and group exhibitions with recent contributions to exhibitions at Kunstmuseum Wolfsburg (2015), Galerie des Polnischen Instituts Düsseldorf (2015), Kiev Biennial 2015, Galerie für Zeitgenössische Kunst, Leipzig (2015). Lada Nakonechna lives and works in Kyiv.