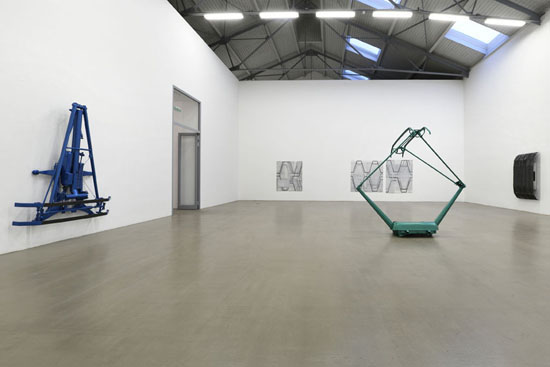 In Carsten Sievers’ second solo exhibition in the gallery EIGEN + ART, works from the series of folded graphic drawings are juxtaposed with expansive installations and sculptural wall works made of found materials like used pantographs and carbon strips from electric rail systems. What they have in common is the interest in the relationships among and the position of things, materials, and forces, which the artist balances out in contemplative and interventionist activities.

Here, stencils are used to bring graphite lines onto rolls of tracing paper in repeating waveforms. Standing in the material, Sievers folds the oversized surfaces by hand. The consistency of the folding – every maneuver – becomes a demarcation for the work, and so creates a physically implemented self-relationship. The finished work thereby achieves a state of reposing within itself, of relaxation, in which the inherent mechanics of folding that underlie the work’s genesis remain visible.

In the exhibition, the question of the positioning is also transposed to seemingly opposite poles – and brings them together: on the one hand, found objects borrowed from a technological utility and, on the other hand, forms and materials that originate in the space of art. The use of graphite to create pictorial, if abstract systems, locates the “foldings” clearly in the tradition of drawing. At the same time, graphite also functions as a contact material to convey energy on the carbon strips of the pantographs on electric trains. But when the carbon strips hang on the wall of the gallery, what dominates is the aesthetic quality of their wear and tear, which appears almost like draftsmanship. 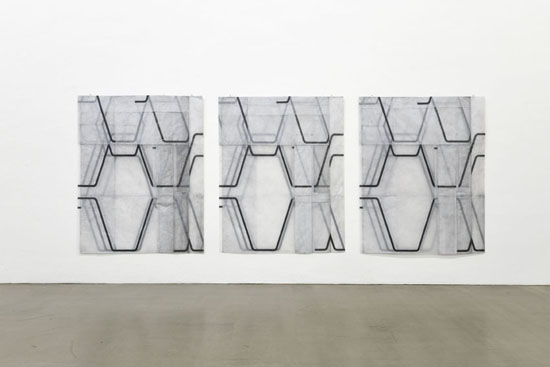 In his 1909 essay “Bridge and Door”, Georg Simmel describes how homo sapiens is a connecting being and thereby separation always stands at the beginning of every connection: the indifferent existence of two sides must first be mentally grasped as a separation in order to be able to be finally connected. In the exhibition, it is precisely the aspect of separation and the production of distance to what is found and appropriated that becomes the central theme. The car lacquer with which the used pantographs were subsequently painted connects the question of artistic authorship through the choice of color with the function of the lacquer in the real world. The latter function is not completely contrary to the idea of authorship; after all, it is what gives an industrial mass product an individual “veneer” within the limited scope of possibilities of the consumer’s decisions. The specific choice of two colors – Porsche Tarifa Blau and Nora Green produced by the Malaysian manufacturer Proton – also points, not coincidentally, to the different ends of the affluence spectrum. Here, the idea of positioning on the scales and systems of value and significance is interwoven with direct tectonic questions that in turn point to a societal dimension.

As Simmel further describes, it is the constant transformation of energy and materials that puts everything into relationship and makes a cosmos out of all the details. Nonetheless, the objects are captured in the insurmountable separation of space: “no particle of matter can share its space with another and a real unity of the diverse does not exist in spatial terms.” And if casting a steel claw onto a high-voltage transmission line cuts off the supply of energy to the high-speed train and leads to the ripping and collapse of the power line, then Simmel’s dictum becomes brutal reality. At the moment of interruption and the brief standstill of the indefatigable networks of transport, energy, and trade, the pantograph withdraw into itself, separates itself, and reposes. 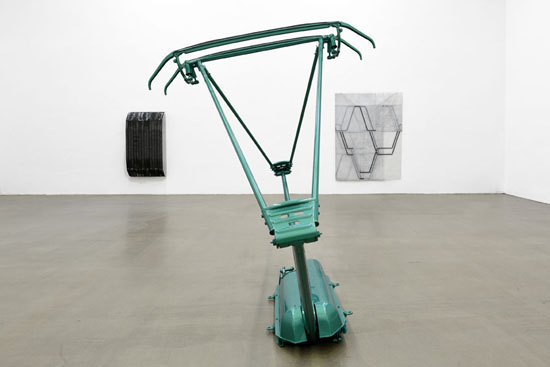