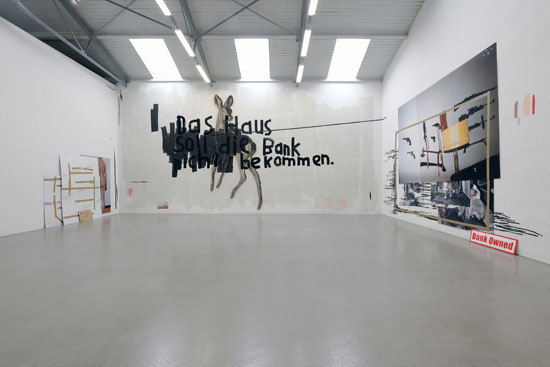 I stage-manage extensive installations of photography, carton, wood and texts. Text and image are not illustrating themselves, but should extend mutual the deliberately statement. My work tells about unemployment, the loss of social status, loneliness, the fear of getting old ... In what do I still believe? Shall I pray or go to the plastic surgeon after all?

The cinematically told stories, written by myself, take generally place in a private setting, between couples or as an interior dialogue of person's captive in themselves. The representation of all-day situations makes it possible to point out exemplary societal fears. So, it is not about categorising women and men psychologically, but they serve as a basis for social difficulties.

"He did well at his job. He had been someone. Now he is a nothing. Now he looks older than he is. And he's asking himself, why he, and not the others."
The protagonists neither have names nor faces. The identity is defined by environment and actions. They symbolize everyone; function as a casing for societal problems. In most cases I deduct strong colours and contrast of my works. They shall be tired, just like my figures feel in our affluent society.

I try to cut all unnecessary and decorative moments out of my work, until there are only the fragments left that are required for the story. There shall only be the relevant frame. The beholder can fill up the lack of images by the fragmental telling with own associations. Additional to the room installations there are partly also large-sized collages. They serve as further information, as a kind of "subtitle" or "bonus material" around the shown installation. Unadorned and ironic he told short stories about the being of life in his all-day conditions. "Cut: meanwhile it is evening. He takes a pencil and scores out the day on the calendar as always. Then he sits down by the window again. I understand. I don't. I understand... he speaks the sentences with a low voice till such time as the first animal appears. In the moment he sees it, he's at 'I understand'. Wrong sentence. He falters for a second, and then takes his rifle and hits. Nobody can understand, how it is, he says to the camera and takes off his wedding ring. A loud bang. Things are flying through the air. Us right in the middle. The bank shall not get the house. It's just a film."