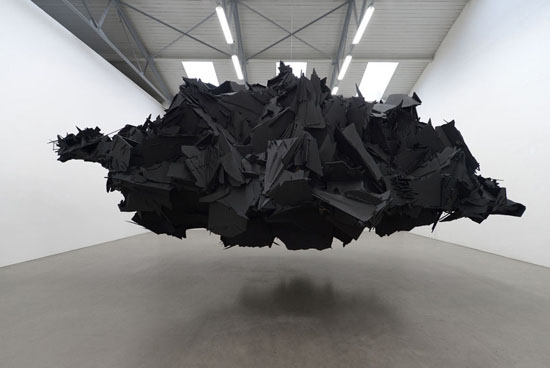 Long-since, Martin Eder’s work is to be read as an encoded irony, a melancholic intermediary stage within the cosmos of New Realism, a strong cynical „anti attitude“ and contemporary, figurative painting and installation. Thematically, his works touch the terminals of both, well-considered aesthetics and superficial triviality. In his current exhibition, inspired by Plato’s Politeia, Martin Eder reflects on the symbolic of the allegory of the cave within the context of various domains of social life.

The sculptural installation Hallucination is the centrepiece of Martin Eder’s exhibition DIMENSIONS VARIABLE/ Geist oder Leben, 1. For the first time, the installation is presented in its fullest gigantic dimension of 6m x 10m x 10m. The sculpture, with a volume of approximately 400 cubic metre, constitutes a huge black chuck, which is frozen in its own movement and floating in the air, shortly before its impact. By being highly phenomenal, the sculpture becomes a formal negative counterpart to an original cave shape. The inner form of the cave is turned inside out. A thin layer supports the abstract form in its being so that the massive, blown up colossus is hovering over the ground.

Plato’s allegory of the cave is probably the most important written piece of western philosophy. Hereby, the cave functions as an important symbol for fundamental statements concerning the situation and position of humans in the world; on their way to be released, to gain realisation and consciousness. The urge to crawl somewhere, to hide, to get to know and explore something is deeply rooted in human behaviour. In a figurative sense, this urge becomes a continuous demand to tackle and investigate the environment and the surrounding that we live in. On his path to experience truthful knowledge and consciousness, man keeps on being the victim of delusions and hints that veil the essential and actual for him. Hence, the affinity to a cavernous-like behaviour is very much present and still holds truth today: for instance a sinus examination by a doctor, the development of a foetus in the uterine cavity or the decoration of a normative „family cavity“ through essential furniture stores. Likewise, the sex drive leads the human being into the other person’s cave. At the same time, this instinct and urge becomes a commercial product of the porn-industry.

Thus, the cave can be interpreted as a symbol of something mysterious, threatening and something, which is away from any realisation. But the cave is as well an allegory for protection, spiritual rapture and sexuality. Martin Eder’s image of the „Negativhöhle“ (negative cave), which can be understood as a geometrical inversion, is embedded in a field of tension triggered by the abstraction and reflection of man, his existence and his needs.

„So I came back to my people with a smile on my face. But their worries no longer reach me: in their middle I am blind and deaf. Nothing in me can be used any longer.“ (freely tranlated from: Georges Bataille: „Missgeschick“)