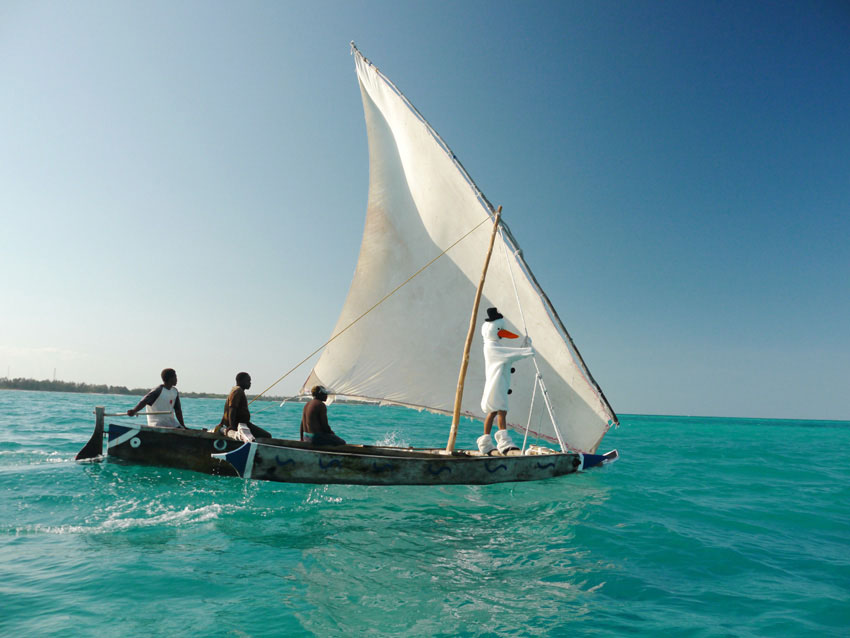 In his works and installations, Maix Mayer investigates the configurations of various narrative models of fiction and reality. The interplay between media/art and architecture is thereby used as continually newly produced matrices. On the basis of his natural science studies, his arrangements are media experimental setups on the perception of time and space.

“African Tales” is Mayer’s second artistic work to be set in Tanzania, after the cinematic essay “Archipel Z” begun in 2011. His first work, which was concerned with the German colonial period, Afro-tourism, and the ideological competition between the Western and Eastern blocs in the 1960s and ’70s, in which “architectonic” aid to development was carried out as a kind of proxy war (East Germany exported the building system WBS_70 to Zanzibar and West Germany made a gift of 1,000 freestanding houses to Dar es Salaam); “African Tales” searches for models of cultural resistance (learning from Africa?) against the increasing global homogenization on the basis of his own image of Africa.

At the center of the exhibition is a film screening in a small video cinema on the outskirts of the capital, Dar es Salaam, which is also called “Bongo” (Swahili for “brain”). Anyone who manages to survive there (in an urban system full of dangers and opportunities) possesses a lot of “bongo”. And to reach this little video cinema, one must leave the city’s colonial center, which is threatened with demolition, and plunge into the labyrinthine informal sectors of the city, passing roads and buildings that cannot be found in any compendium of construction typology. These areas are far removed from the beaches of the middle classes, where beach vendors with models of buildings populate the shore on weekends.

The veejaying* by the film and cinema narrator Captain Derek Gaspar Mukandala* alias Lufufu, who operates a video cinema in an annex to his residential building in the district of Vingunguti, stands in the center of Maix Mayer’s work. In Africa, film narrators survived the end of the silent movie into the present. As a missionary project, the BEKE* program (1935-39) of the British colonial administration and of the WMC*, in particular, studied how entertaining and educational films could be produced for the Bantu audience in order to transform the region into a “modern” colony. These traveling movie houses required film narrators (lay translators) to cover the diverse spectrum of local languages. The translators narrated the films’ stories against the background of their own world of life, thereby transforming the alien global products into a local context. They are thereby simultaneously narrators, commentators, explainers, voice actors, translators, entertainers, and representatives of the audience. In a plural-media (performative-expressive) act, the film narrators mix, live, the original tone with their own additional “sound track” (commentary, translation). The uncomfortable seating and the bright lighting dominating in the cinema preclude the audience’s classic “immersion” in the film’s illusion. The movie narrator acts as a kind of art guide through the original film, letting it speak only when he wants to and creating a new narrative genre between word and picture, in which the visual aspect of film loses its hegemony. Film narration thus neutralizes the idea of the dominance of globalized images. The characteristic of mass media – sending messages in identical form across vast distances all over the world – is countered by local realities and processes of appropriation. The creation of an unlicensed DVD distribution system with newly mastered Swahili versions of originally Chinese pirated copies is a model of resistance confronting the globally operating media industry and its copyright system, oriented toward maximum profit.

From a single camera angle (85 min), Maix Mayer shows Captain Mukandala veejaying the East German children’s film “Ein Schneemann für Afrika” (a snowman for Africa, 1977) for a local audience. The footage reduces the effect of the visual elements and shifts the cinematic narrative from the movie screen to the viewers in the video movie house. For us European viewers of this scene, the plural-media act of film narration is brought to life by the atmospherically hybrid audio track and by reading the German subtitles as a translation of the speech act.

The story of what is probably the sole East German feature film with “African” actors reveals the difficulties of producing a “socialist modern” image of Africa. The leading actress, born in Leipzig and playing the African girl Asina, came to film through an advertisement in a daily newspaper that sought “African children”. A year after the film’s premiere, she and her family emigrated to the “class enemy” in Hamburg, where she later studied architecture. The film footage was shot on the ship MS Wismar, in Bulgaria, and on Rügen Island. To situate the story more realistically in Africa, East Germany’s documentary film studio provided footage from Africa. The opening credits note this collaboration, unusual in a feature film.

The mixed media collection “Ein Schneemann in Afrika” supplements the film projection in the exhibition. Maix Mayer gave two of his own photographic series (snowmen in parks in Leipzig and urban scenes in Tanzania) to local artists to rework in the Tingatinga style of painting.* This is supplemented by a commissioned sculpture of an “African” snowman and the cinematic documentation of a snowman performance.

Captain Mukandala = His trademark is the hat he inherited from his grandfather. Since he served in the army until his retirement, always with his head covered, he feels “naked” without a hat, as he formulated it in conversation with Maix Mayer. He estimates that he has “translated” 2,000 films, and he is considered the first Tanzanian film narrator.

Tingatinga = A style of painting named for the painter Edward Said Tingatinga († 1972), who is regarded as the first Tanzanian artist to be noticed in Europe. His trademark was the use of cheap bicycle lacquer. He painted motifs of nature (for example, the “big five” African animals: lion, giraffe, hippopotamus, elephant, and antelope), landscape, and village life for Western tourists. Today some 300-500 artists in Tanzania work in this style; about 90 of them are organized in the eponymous studio as a cooperative in Dar es Salaam. These artists copy, duplicate, and borrow motifs and style variations from each other, so that there are often identical pictures by different painters. Most of the painters come from the countryside and are not typical artists as understood in the modern West. The Tingatinga style resists classification and reminds us that what we perceive to be art is our own dominant Western construction, the trademarks of originality and authenticity.