The Devil holds the strings that move us!
In repugnant things, we discover charms;
Every day we descend a step further toward Hell,
Without horror, through gloom that stinks.
Charles Baudelaire, from the Foreword to Les Fleurs du Mal, 1857-1866. 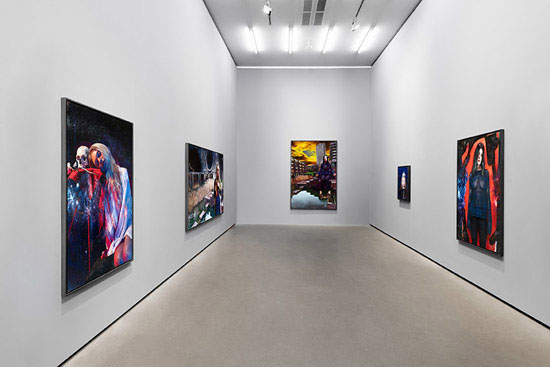 Oil slicks and seas of plastic, poison gas bombs and aerial attacks, data theft and surveillance – the world is going under as we watch. The future? A bleak scenario. Martin Eder's painting series is positioned in this dystopian overall mood. As a counter-vision to the optimistic but unrealistic no-place of utopia, his dystopia has long since come into being; his pictorial world has taken it in, quietly and subversively. The bleakness does not manifest itself as a black apocalypse, not as destruction or purgatory, but conceals itself in the violet sky, in neon lamps and concrete ruins, in wrecked cars instead of dead nature.

With the stylistic means and motifs of dystopian fiction – whether Orwell's 1984or Matrix– Martin Eder creates a feeling, a light, into which he plunges his pictures. It shifts between isolation and repression, between unsatisfied hopes and frustration, separation, and decay. But where the title leads one to suspect scenes of cruelty, ugliness, and hate, beauty appears in its demise, a brief flash from the murky surface, the flowers of evil. 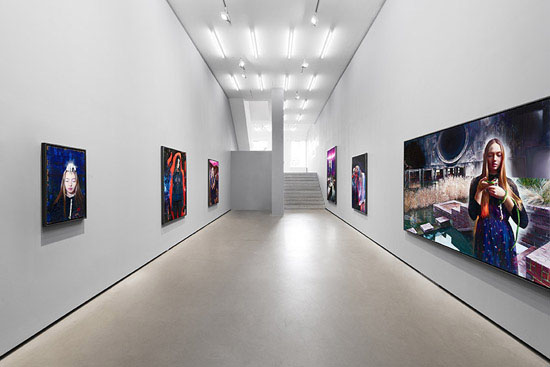 In this dystopia, Martin Eder's female protagonists are exposed, isolated, and alone in impermeable surroundings. They haven't resigned themselves to their fate, but in the end, they lack the strength to rebel. At the threshold between the Now and an imagined dream world, they drowse: absent, staged, unresponsive props at a fashion shooting. Failed because of their own ambitions, like the concrete buildings they move within. Denounced as a dysfunctional utopia, these become the backdrop of the actual dystopia that we ourselves have created. We voluntarily submit ourselves, allowing algorithms to decide on our perception and bots to direct the discussion, place our rights in invisible hands, a silent assent to hostile takeover. Contesting is too great a strain; the promise is too enticing. The spirits of the future, not of the past, have gotten the upper hand; as spooky husks of former individuality, they slink through the world, empty and remote-controlled: just don't be conspicuous or loud. The only communication takes place with one's own mirror image; occasionally, snakes provide company and, as ambassadors, slither between the worlds. Highly symbolic beings that contain evil, devilishness, and treachery as much as seduction, healing, and wisdom. As if they wanted to point the way out of the past of nature and into the promised land of a digital future, blinded by the magic of the dystopia, toward the shadows that it has long since cast ahead of itself. 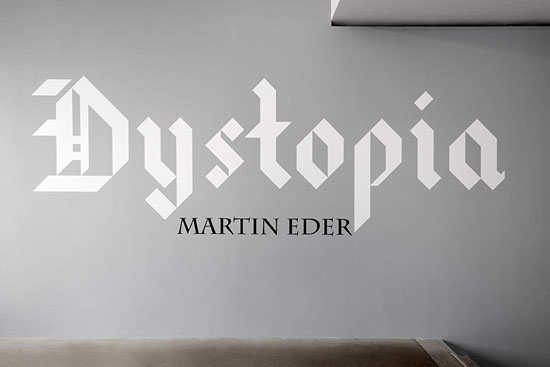