For Martin Gross, it all started with drawing. For his monochrome architectural conceptions executed in pencil on paper, he was awarded the student prize of the Academy of Fine Arts Leipzig in 2011. In 2013 he went to London on a studio grant (The Woodmill Residency #4) and in the following year began his post-graduate studies at the Royal Academy. Gross was born in 1984 in Plauen, and his early work already hinted at what would become increasing important later, namely his interest in drawing processes and hybrid means of expression, as well as the notion of drawing as a map, a type of cartographic positioning. Although these basic elements still play a central role in his artistic approach, Gross has substantially expanded and at the same time perfected his practice in terms of visual language, colour palette, motifs, and technical abilities. Today he uses a multimedia approach for his large-scale installations, allowing for a wide range of stylistic forms of expression.

Gross begins at exactly the point where things are particularly confusing. He draws inspiration from the rapid pace of metropolitan life in the 21st century and deals with the flood of ever-changing information in the form of signs, sounds and images that confront us daily. In doing so, he refers firstly to the reality of life in contemporary cities, whereby a seductive world of consumption appears as a sea of lights that dazzles everything, becoming a surface of projection for feelings, desires and dreams. Secondly, he makes reference to the powerful presence of digital realities and the speed of constantly overlapping screen worlds. Gross filters and translates the perception of these contradictory and fragmented sensations of everyday life into linguistic sketches and short texts, deliberately utilising abbreviations, typos, file names, memes, emojis, headlines and punch lines, as well as advertising slogans in English and German. As such, he builds on the literary and visual approach of concrete poetry, updating the process with elements from the everyday culture of his time and the different communication strategies associated with it. 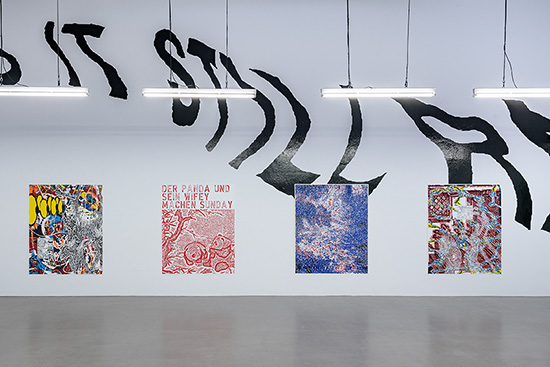 > link to the installations views