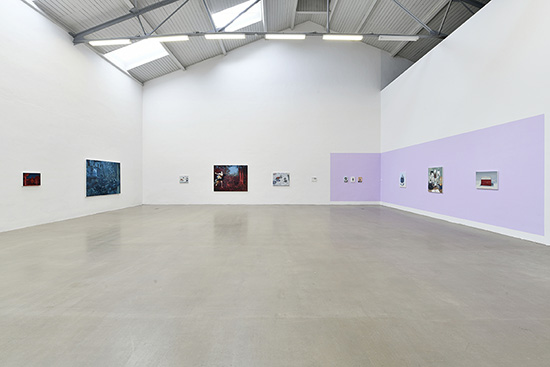 Melora Kuhn’s new exhibition "Tales from the Dark" shows exactly that: stories from the darkness, as the artist explores it in all its facets. Here it does not simply mean night, or evil, or even death, but represents a place of change, of letting go. The kind of change that darkness brings may not always be easy or welcome, but it is a necessary and important part of the human condition. When darkness brings about the end of a chapter, a new door opens at the same time: what is today cannot be forever, or else it will become sickly and stagnant. Without winter there is no spring, and without darkness there is no light.

Abandoning illusions, beliefs and attitudes that no longer serve us or are outdated illustrate such change. For example, some of Kuhn’s paintings – all in oil – address patriarchy. In "Heritage," we see portraits of historical female figures such as the writer Margaret Fuller or the astronomer Maria Mitchell over an open, blank book. All too often excluded from the public eye or quickly forgotten, their biographies and legacies have yet to make it into our history book. Gender dynamics are also a theme in "Red Wood” in which Kuhn refers directly to Solimena's "The Abduction of Orithyia" of 1695. The original painting is about Boreas, who is in love with the daughter of the King of Athens, Orithyia, but because she has rejected him, he kidnaps the frightened woman in a fit of rage. Kuhn's abused Orithyia finds herself in the blood-red forest, but a way out is visible: a bright blue sky on the horizon, hope after darkness.

The forest appears several times; while it is a place of shade, it is also a place of rest. It offers time for thought and reflection. The depth Kuhn gives to her paintings intensifies this entry into the inner world. The forest stands for the transition from one phase of life to the next; here plans can be made and next steps considered. 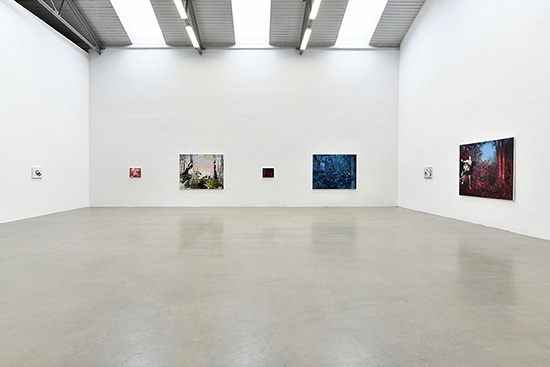 Another recurring symbol is the tablecloth. From a historical perspective, it refers to the complicated history of cotton, while at the same time the crumpled fabric and empty cups evoke a patched-up landscape of family gatherings. To what extent does our past touch the present? Like a map, the thread leads through past events.

Darkness, of course, also signifies the mystical which is expressed in the castle, for instance, and here the artist picks up where she left off in her previous work: The imagery of mythology, fairy tales and elements of the fantastic have always been part of her exploration. By isolating people or symbols and placing them in a new context, Kuhn rewrites the narrative and makes the political unconscious visible.

At the same time, Kuhn speaks a new language in her current works. The painting of the unicorn, a central work in the exhibition, is not simply a fairy tale creature, it is a mystical being in which its creator believes. At once humble, graceful and powerful, it sits enthroned among the trees - again the symbol of the forest - and on the threshold between light and dark, gazing with one eye at the warm tones of orange and pink and with the other at the viewer in the forest. One of the most magical of all fantastical creatures, the unicorn is said to be able to move carelessly between worlds, representing the expansion of our imagination. Among the Greeks, Babylonians and Persians, it was considered a symbol of health and purity.

Kuhn's works resemble diary entries that explore and document changes: some are small and personal, others larger and highly political. They affect us as individuals and as humanity. In “Tales from the Dark”, Kuhn invites us to free our minds, to follow our intuition, to believe in our strength and in healing. Her work is full of light and hope. 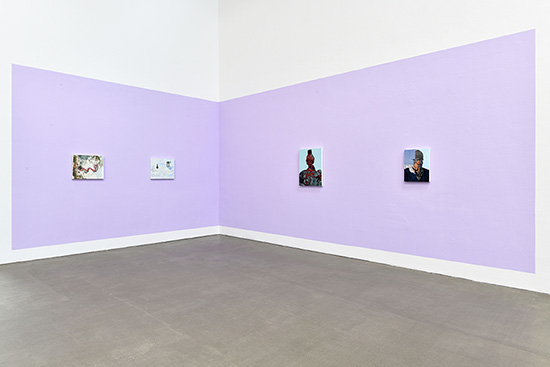